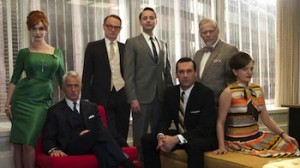 Mad Men, the critically-acclaimed show that turns a microscope onto the New York advertising industry in a not-so-long-ago era, recently ended its sixth season. Do you watch Mad Men? If so: How do you watch it? I have watched all 78 episodes in two distinct ways.

My husband and I were late to the MM train, climbing aboard in late 2008 when we were invited to a Mad Men-themed New Year’s Eve party. We binge-watched the first two seasons over the course of a few weeks and were officially obsessed by the time the third season hit the air. Every Sunday night we sat down to watch the newest episode in real time. But something had changed. I was getting lost, and had trouble keeping up week to week.

The brilliant thing about Mad Men is the writing. It is what sets the show apart from 99 percent of everything else that is on TV right now. Characters are developed in a detailed and intriguing way, intricate storylines are carried episode to episode and season to season, strongly spoken lines slap you in the face, and softer ones almost sneak right past unless you are hanging on to every word. For a while, I was watching every episode twice to get the most out of every minute of Don and Peggy, Roger and Joan.

Waiting a week between episodes is like putting down a novel for seven days and then picking it up again. You remember the main plot lines and the important characters, but you might find yourself flipping back to locate the first introduction of a minor character or the details of a subplot.

With full seasons of most TV shows now available on DVD, and streaming-only releases of series’ such as Arrested Development and House of Cards, the way we watch TV is changing. How do you watch meticulously written TV shows? Do you like to keep up in real time so you can chat about it the next day with your coworkers? Or is it worth the wait to go on a season-long bender once all the episodes are available at once? With the seventh and final season of Mad Men scheduled for 2014, this is the decision I have to make.