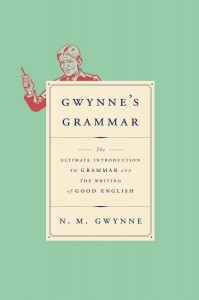 Self-taught educator and grammarian N. M. Gwynne has helped countless writers brush up on grammar and polish their writing to perfection. The latest edition of his bestselling book, Gwynne’s Grammar: The Ultimate Introduction to Grammar and the Writing of Good English, provides essential guidelines for writers at any stage in their careers. The pocket-sized guide, which also includes a reprinting of Strunk and White’s classic The Elements of Style, covers all the bases of grammar, from syntax basics to the structure of verse.

Gwynne gives The Writer his top grammar tips and musings on the writing life.

What is the number one grammar rule writers should follow?
Grammar is subdivided under a number of headings: vocabulary, morphology (sometimes called accidence), syntax, punctuation, prosody and so on. My number one rule falls jointly under the first of those three headings: Choose exactly the right word or phrase, use exactly the correct form of it for the purpose and put it in exactly the right place in the sentence. I have a number two rule: Having written your sentence, be prepared to redraft it and redraft it, continually refining it, until it does the job you want it to do as well as that job can be done. Moreover, be prepared to sleep on it and have another look at it in the morning, to see if it still looks as good as you thought. Be assured: Writing is not something that comes naturally. It needs effort, and much effort; and the only happy news is that the effort becomes easier, the more practice one has.

Among famous novelists or essayists, whose grammar do you most admire and why?
This needs remarkably little thought. Without hesitation, I select William Cobbett, of the late 18th and early 19th century, whose writings were at least as influential as those of anyone else in his day. Born of very poor parents, his education was minimal. At the age of 17, he made his way to London, and, finding no employment there that was to his taste, he enlisted in a regiment in the British Army and served in the ranks for eight years. During his time, he set about obtaining a complete mastery of English, and, my goodness, he made good use of that mastery from then on, writing powerfully for several different purposes that he considered important. For instance, he founded a long-running newspaper, the Political Register, which quickly developed a massive circulation for that time, and, year after year, attacked policy after policy and politician after politician. In his various writings he gained a reputation that is still reverberating today, some 200 years later.

Of particular interest for our present purpose here, he also wrote a book on English grammar. A Grammar of the English Language, which was an immediate bestseller, is still in print today, and indeed is still very much worth reading as an instruction manual.

I rate Cobbett as a writer who is as compelling and enjoyable to read as anyone who has ever written in our language.

Many novelists break the rules of grammar to great effect. Why should they know grammar?
In any human activity there can be times when the basic rules can be judiciously bent or broken to good effect. In order to know when and how best to do this, we need complete mastery of the rules of the activity in question, so that they are completely at our disposal. This is obvious enough as soon as one thinks about it. It applies to anything, from some business activity, to golf, to chess, or whatever.

It applies perhaps most of all to writing, which is arguably the most demanding human activity of all. If one does not know what one is doing when handling the written word, the adverse effects can range from less-good-than-it-might-have-been to giving-rise-to-misunderstandings to liable-to-provoke-the-scorn-of-discerning-readers. It is true that there are writers who get away with relatively incompetent grammar, but it is also true that no one competent in grammar would ever be happy to know less grammar than he or she does know.

One thought on “A grammar giveaway!”