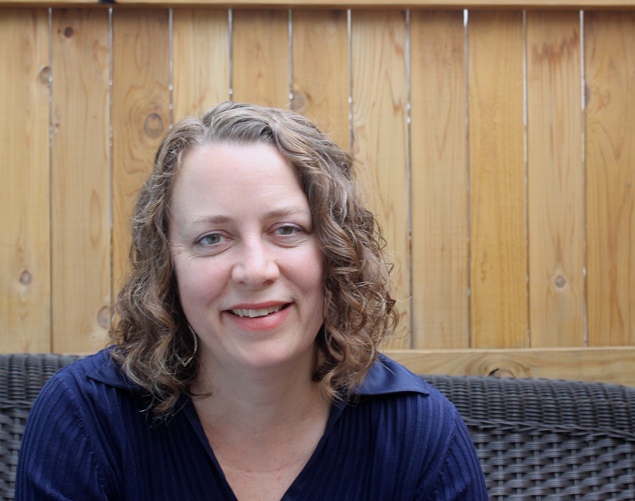 The act of writing is an evolving process for many writers. Julie Reiser says she started out using a yellow legal pad and pen, then upgraded to a Moleskine and has recently taken the digital leap to Evernote. The app synchs with all her tech devices and allows her to write whenever (and wherever) inspiration hits.

“Mostly, my writing process consists solely of applying a bucket of ass-glue to my chair,” says Reiser. “Once I finally manage to sit down, things happen.”

She contemplated composing her winning entry as an essay or a work of immersive journalism or as creative non-fiction, but found that putting too much thought into the pre-writing process delayed her work.

“It became very much a game of thinking about writing rather than just actually writing,” she says. “At the end of the day, that doesn’t produce pages. When I finally let go and just let the piece write itself, it came out much more cleanly and directly.”

It’s the second day of The Rainbow Gathering of Living Light—a self-assembling cancer of Hippiedom that sets up camp in a U.S. forest every Fourth of July—and I’m about to pop a vein.  A teacher of the nation’s elite, I’ve suddenly found myself in a hash-smoking patchouli circus stretched over a steep hillside in the Allegheny Mountains.  Two hours east of Pittsburgh and three hours north of Falling Water, this hippie picnic is in the middle of Nowhere, PA, and populated with hippies, nudists, stoners, ravers, mystics, yogis, and freaks–every stripe of humanity that cannot be filed neatly under “Dockers” or “Minivan.”

Open to “anyone with a belly button,” the Rainbow Gathering has used the constitution’s guarantee of “free assembly” to buck authority and produce what may be the world’s longest-running rave on National Park land since 1972.  Lacking the commercial sophistication of Bonnaroo or the dumb luck of Woodstock, the annual U.S. Rainbow Gathering still manages to collect upwards of 20,000 people on a good year and demyelinate the nerves of the U.S. Forest Service.

“How many spiritual materialists are here?”  I start to count the number of hippies who look like they’ve quaffed too much of the Kool-Aid for my comfort.

“They’re not trying to piss you off on purpose.”  David whispers, but it’s direct.

I turn my attention back to their Circle for World Peace, a sunrise-to-noon meditation and the supposed reason why we, the Middle-aged Zen Buddhists from Suburbia, are here. The circle’s composed of thousands of people, all sitting silently in a large spiral formation. Outside. In July.

A young blonde guy sits down next to me. He begins to pull off all his accoutrement—not a trivial task given that he’s wearing many non-standard items for the 21st century.  He gets down to a dirty loincloth and begins doing yoga with a noisy vigor.

I turn my focus back to the circle and try to meditate—a hard thing to do given Swami Narcissus and the acrobatic gyrations happening off to my left.  I can’t stop opening my eyes to watch him.  I don’t find him attractive, and I don’t want to see his junk out on display, but I don’t want to miss being appalled should something make an appearance.

After an exaggerated round of namaste-ing, the Swami finally sits down.  To my dismay, I realize that he has developed a highly potent case of the stinks.  It’s got that deep-garlic, vegan register, and it leaves a hot, metallic taste in my mouth.  He smiles.  I smile back but look quickly look away.

Shortly before noon, the silence is broken when four Celtic revivalists walk up chanting.  Their hands are spread out in the air like fundamentalists feeling for God in the ether.  Their gait has a precision and solemnity that simultaneously annoys and humors me.

“I will not be silent any longer.”  A classic New Age oracle, she’s wearing a velvet cape straight out of a Rossetti painting.  An awkward use of caesurae, I think.

“We are raping our Mother.” It is Greg Brady intoning James Earl Jones.

The circle of meditators is trying hard to be tolerant, but it’s not working. On the edges, the crowd’s T-cell people are mobilizing to do something about it.

“Just wait.”  David pulls me back down.

“When The End comes, Time and Space will stop for exactly five days.” This oracle has large medallions of turquoise on both her wrists. Her arms are raised, and the sun reflecting off the silver keeps blinding me.

I lean over to David, “If time’s stopped, how do they know when five days are up?”  He smiles but keeps watching.

The oracles begin chanting something to The Mother. They begin swaying around en masse and in frighteningly sexual ways. An Elizabethan jester walks up to them and asks them to be quiet, but nothing happens. A naked mime holds his heart and circumambulates the oracles to defuse the situation.  It doesn’t help.

Out of nowhere, someone begins to chant om in a rich basso profundo.  In less than 20 seconds, thousands are chanting together. It keeps swelling bigger and bigger.  A large ocean of sound, it acts like a loud lullaby on the oracles.  They sit down and become silent. But the crowd keeps om-ing and om-ing, relentlessly. The ground begins to reverberate.  It becomes so intense that I can feel it in my heart as much as I can hear it in my ears.  I can feel it enter me from everywhere and begin to penetrate.  It swirls around in my brain and I can feel it re-writing all the code installed deep inside.  I begin to melt into all the other 10,000 smelly, stinky, dirty people until we form one massive vibration. It rattles me to my core.  I explode and begin to sob uncontrollably.  It feels inexpressibly good.

We pull the rods out of our tent, and its semi-spherical dome deflates.  I begin peeling back the water barrier and, when I get to the furthest edge, I uncover a tiny nest cobbled together out of soft bark and grass.  Inside, I see two microscopically-sized mice—babies whose eyes aren’t even open yet.

“Hard to believe they were here the whole time, huh?” David bends over my shoulder to get a look at them.

“Yeah. They’re so soft, so small.  I could’ve killed them.” They’d been right under a copy of Lolita that I’d had to bring. I start welling up with tears.

“But we exposed them.”

“To what?”  He takes a piece of hollowed-out log and places it over the top of the nest.  It makes a good condo—a dry roof plus some room for expansion.  A frantic-looking mother returns and threads her way in.

She doesn’t look back.