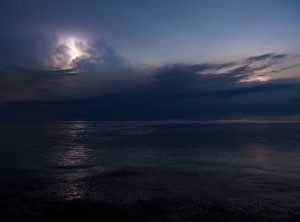 Second place writer Bhargavi Lanka stunned us all with Nights Like These, a diary-type progression that follows the struggles of a young Korean girl and her family.

Of her work, Lanka says, “When I started writing the story, I wanted to capture the innocence of a child who didn’t understand what was going on around her.”

July 25, 1983
I feel most beautiful at night, when the sun hides and dreams can become vivid memories. When the sea stops kissing the shoreline, letting it rest until the morning, and everything feels serene, when my big brown eyes should not be open, when I can finally feel at peace. I sit by my window and admire the quiet ocean. She looks like a queen in her realm protecting her pearls, her fish. Living by the shore definitely has its benefits. I spent many nights like this, just watching the ocean, wishing. Wishing for happiness, for pretty showing-teeth smiles over the rice bowl, instead of angry, mean eyes. Sometimes, I wished I could be the ocean. Everyone loves the ocean. If I were her, I would mean something. I would not just be a little girl from South Korea; I would be special. People would listen to me instead of sharply rapping me on the head and dismissing me. Nights like these remind me of better times, when everything was simpler and Uhmma and Apa got along. When we played in the ocean and Uhmma smiled her special showing-teeth smile and Apa made her laugh, when we would visit the ocean often and there was plenty of rice to go around. These nights make me miss those happy memories. The ocean would share her pearls with us and we would sit by her with full stomachs and content smiles. Now, we sit with less and less rice in our stomachs, rationing every last grain as Apa is given less and less pearls.

November 6, 1986
Lately, Apa has not been able to obtain any fish. Our stomachs have been crying for days and we pray that the ocean will feed us soon. I remember the last time I ate. It was nine days ago, a fistful of rice and a small amount of seaweed for flavor. It tasted so good, I scraped up every single grain of rice, savoring each. I look out my window more now, wishing. But now, I don’t wish to be the ocean, I wish for food. Occasionally, Apa will make me wake up at four in the morning and help him fish for the pearls. On those days, we usually come home to Uhmma empty handed. Rarely, however, we get one or two fish that we sell at the market to get our rice for that night. Tonight, Apa told me to arise early to come with him. More and more, he has been slipping me out of school to help him, and Uhmma does not like it at all. They argue about this sometimes, but he always wins. I wish she would not argue though, because she always has blue-purple shadow-like bruises covering her body afterwards and her eyes bleed rivers. Two days ago, she told me to study hard even though I have not attended school in two weeks. She said she wanted me to be more than a fisherman’s wife. She said she wanted me to always have a stomach full of rice and happiness. She blames the ocean for our state of desperation. She has lost her easygoing, showing-teeth smile.

April 23, 1991
I have started to lose hope in the ocean, though I still stare at her enviously at night. She sits smug in her realm while we slowly lose everything we have. I have begun to think like Uhmma. It is the ocean’s fault that Uhmma and Apa always fight, that my beautiful Uhmma has bruises all over her body. It is the ocean’s fault that our stomachs are often crying. The evil ocean has taught me Uhmma’s hardship. When Apa is not home and I have begged Uhmma enough, she will tell me about her childhood. She was a rich girl who owned many dresses and servants. Her house was colossal and made our hut look smaller than her servants’ quarters. Uhmma was smart and could have been anything she wanted, anything. But she fell in love with Apa, who was a poor fisherman. He was a nice man back then, she would always say. Her parents refused to let them get married and said that they would disown her if she ran off with trash like him. However, her love for him was stronger than her parents’ words. When she ran away, she lost all contact with her Apa and Uhmma. She left her own Uhmma and Apa, the two people she respected the most, for my Apa and for the ocean, which both hurt her.  Now she sits at home, in love with the abusive man she married, saddened by their hardships due to the ocean that used to love them. She always finishes this story with a speech about me, about how I should study hard and make a better life for myself. Now, older, I reply to her. “I have been studying, Uhmma. I want to be better. I will be better.” She often holds my hands in hers and we pray, while our eyes bleed oceans together.

December 6, 1992
Today, Apa finally gave up on the ocean. He has decided to work as a vendor at the market instead. He thinks that we won’t be as hungry any more. I don’t always sit by my window and stare any more. But some nights I do. Those nights are bittersweet. The ocean, which stole my first smile and my first painful tear, still makes me wonder. Why is it that something that can make you so happy can be the same thing that makes you die on the inside? I do not know the answer to my question, but someday I will. The ocean has taught me that life will not always be happy, but to cherish what I have. Next year, I will go to a big name university in Seoul on a full scholarship. I, Uhmma’s only hope, will be fulfilling our dream. A dream that can finally become reality.