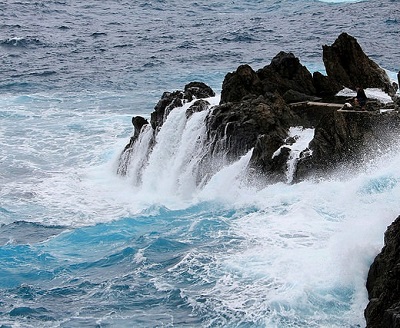 Jill Meyer made voyeurs of all of us with Ellyn Miranda, which shines a spotlight on the curiosity that arises when a person goes missing.

Meyer says, “Though we have come to understand certain aspects of the ocean, much of it remains a vast mystery, and because of this, the ocean has become a character with human traits.”

Ellyn Miranda couldn’t let another winter come into her bones, which is why one evening, when dusk is like a film over the eyes, she set down the path from her front door, not bothering with shoes because they would have just filled with sand, and walked into the curling cold hand of the ocean and drifted away.

Or was carried away.

Or was pulled from a boat by the heavy waves.

Or was tossed by a hapless lover into the sea.

Either way she’d drowned. Yes, most definitely drowned. This was certain. But what was uncertain – that being the details of her disappearance – drove the neighborhood of Point Norwich rather mad as they debated over it for some time. As with every unexplained event in history, an explanation was sought after and numerous fabrications were formed into something with which the residents could wrap around them at nights as a blanket of consolation. Consolation for what, they weren’t quite certain.

Every neighbor’s hello from the other side of the shrubs was the beginning of pensive debate and a sad shake of the head with conversations to carry on into every living room, library and tavern.

Carol Pimperton, owner of The Green Buckle who served all of her pot pies with mousse pudding and a digestive, had taken to hunting oysters on the shore, claiming she needed to spruce up her menu with some new dishes. Though the only time she seemed able to go was at dusk when the atmosphere turned a bluish-green.

“And guess who I seen turnin’ over the debris from last night’s storm?”

“That was some storm, sure.”

“Shirley Hampton. Pokin’ round with the night comin’ down, like she was lookin’ for some carcass.” The last word was whispered so that it hissed sharply in Dale Pimperton’s ear.

“And what was you doin’ nosin’ about the bay then?”

“Was lookin’ for oysters, course.” Came the ready answer.

Carol Pimperton couldn’t very well be blamed for hunting oysters at odd hours. Half the town had been dropping by the beach, storm or no, hoping to find some kind of relic from the misfortune of Ellyn Miranda. Usually the small black outline of one individual or another could be seen walking slowly along the beach, watching their footprints fill up and disappear behind them. Some perched atop the smooth grey boulders that had no doubt once been mountains, watching the heaving breath of the blackening waters.

On one occasion, twelve-year-old Brendan Drummond had found one partner of a pair of what had been red heels, now pocked and drained of its vibrancy from the salted water. He brought it to the tavern, running with importance as though he’d found a pearl. The sad article was snatched up and declared rather precious and was borne to the Chief of Police, trailed by the entirety of the tavern’s patrons.

The heel was inevitably set into a glass box lined in velvet, along with other fancies that had washed ashore, including a shredded polka-dot bow and a rather lovely shell that someone was certain must have been kept as a good luck charm in the pocket of Ellyn Miranda. They gathered around the glass box on a very special day advertised in the paper to hold a vigil lamenting their dearest neighbor. How were they to know that Ellyn Miranda had a distaste for red nor a love of heels, had been none too lucky in life and that the contents left behind from lovers’ meetings on Kastin’s Cove had a tendency to be sucked up by the water and spit out upon their sands? Seventeen-year-old Amanda Brontt thought she recognized the shape of the heel in the candlelight, but decided it was hard to be certain and the lighting too dim, and turned her pretty face to the dripping wax in her hand and sang along to the last heartfelt verses of Nearer My God to Thee.

Ellyn Miranda really was much nearer to the townspeople than they would have believed. If not through the imagined belongings over which they now reverently bowed their heads, then in other delicious ways. When Ellyn Miranda’s body reached the outer edge of the bay, the fish went to work quickly. The fishermen in turn set out in their boats every morning and came back with fat halibut that squirmed but a little on top of their fellows who considered their fate too certain to fight. Whether they would have found consolation in knowing that we do indeed leave a little something of ourselves on this earth, it’s hard to tell, but the people of Point Norwich were carrying a bit of Ellyn Miranda with them everywhere they went.

Read “Normal” by Graydon Megan, the first prize winner.
Read “Nights Like These” by Bhargavi Lanka, the second prize winner.