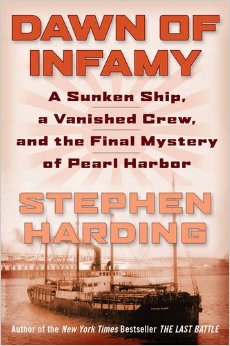 The 75th anniversary of Pearl Harbor will occur on Wednesday, December 7th. To commemorate this historic day, we’re giving away a copy of Dawn of Infamy: A Sunken Ship, a Vanished Crew, and the Final Mystery of Pearl Harbor by Stephen Harding.

The book tells the story of the American cargo ship Cynthia Olsen, which vanished – along with its thirty-five crew members – early in the morning hours of December 7th, 1941, after being fired upon by the Japanese Imperial Navy.

Harding, best-selling author of The Last Battle and editor-in-chief of Military History magazine, spent years of research on the book to uncover exactly what happened that morning, shedding new light on this historical disappearance.