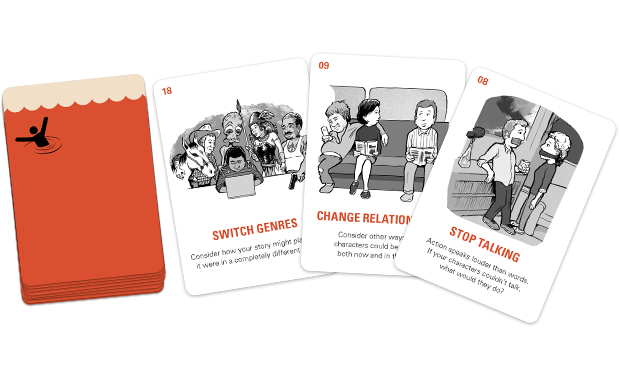 We get it. Facing a new year – and your new writing resolutions – is hard.

That’s why we’re hosting a special two-week giveaway of a Writer Emergency Pack. This fun set of cards offers everything you need to claw your way out of a block, and it’s petite size means it’s ultra-portable, too.

The pack began as a Kickstarter campaign started by screenwriter John August in 2014. The campaign was a smash success, backed by 5,714 donors and fully funded by 1,756%.

The deck is comprised of 26 Idea cards (“If your hero and the antagonist had an honest discussion, what would they say to each other?”) and 26 Detail cards, which provide concrete tips for story-building (“Heroes won’t always beat the clock. Work through what might happen if they fail.”).

We’re giving away one Writer Emergency Pack to one lucky reader. Enter by 11:59 p.m. EST on Thursday, January 5th to win.