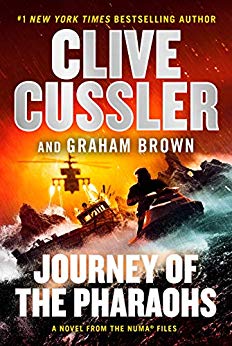 sler, bestselling adventure novelist and creator of the beloved maritime thriller hero Dirk Pitt, died on Monday at the age of 88. His wife shared the news on the author’s Twitter and Facebook accounts yesterday.

Cussler wrote or co-authored more than 80 books in his lifetime, beginning his career in the 1960s and continuing up until his death. Journey of the Pharaohs, co-authored with Graham Brown, will be published by Penguin Random House in early March, and more books by the late author are scheduled to be published posthumously in the future.

Cussler’s books have been published in more than 40 languages and in over 100 countries. Two were turned into films, Raise the Titanic in 1980 and Sahara in 2005.

Cussler didn’t just write about maritime adventure: He was an avid underwater explorer and founder of the National Underwater and Marine Agency, a nonprofit organization that has discovered more than 60 shipwrecks.

Cussler also served in the Air Force in the Korean War; after his time in the service, he became an award-winning producer of commercials on both radio and television.

“It has been a privilege to share in his life. I want to thank you his fans & friends for all the support,” Cussler’s wife, Janet, said on Twitter. “He was the kindest most gentle man I ever met. I know, his adventures will continue.”