Rishi Reddi’s short story “Karma” is at the heart of the 2013 One City One Story project that takes place during the Boston Book Festival each October. The story, which was previously published in Reddi’s story collection Karma and Other Stories (recipient of the 2008 L. L. Winship/PEN New England Award) is about what happens when Shankar Balareddy has a spate of bad luck — he’s fired from his job, his brother makes him move out, he’s lost about his next career move.

The story isn’t driven by plot as much as by interiority and atmosphere. The first line “Shankar Balareddy, unemployed professor and former convenience store clerk, and Prakash Balareddy, successful cardiologist, were as unlike each other as any two brothers could be” is reminiscent of Tolstoy’s famous first line in Anna Karenina: “Happy families are all alike. Every unhappy family is unhappy in its own way.” Reddi creates not only a sense of place (Boston) but an emotional atmosphere in which Shankar pursues his instincts and interests — including cooking, saving migrating birds that are flying into windows and extricating himself from his brother’s stronghold. He becomes an actor in his own life (one kind of karma) and the beneficiary of a “what goes around comes around” payback (another kind of karma). What is karma? Reddi gives the question a jolt that may leave readers with more questions than answers. (And don’t you love when a short story does that?) 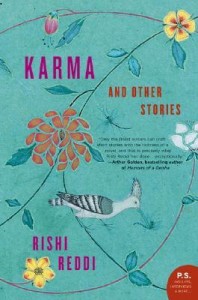 Among Reddi’s readers this week are thousands of Bostonians who have downloaded the story or picked up free copies at libraries, coffee shops, subway stations and other community locations in the Greater Boston Area. Many of these readers (and writers) will join Reddi and me for a live discussion of the story and writing at 11 a.m. Saturday Oct. 19 at the Boston Common Hotel (40 Trinity Place), one of the sites of the Boston Book Festival. If you live in the Boston area, please join the town-hall style conversation, which is free and open to the public. Anyone can download the story. And let us know what you think: Is Shankar having good or bad karma?

Reddi, who was born in India and grew up in both the U.K. and U.S., lives in Cambridge, where she blends careers as a lawyer and writer. I asked her about her writing process. Her answers follow.

What is the most important quality for a writer, and why?
If you want to be a published writer, the most important qualities are perseverance and resilience. You have to meet rejection with a certain amount of constructive defiance, or else those responses from so many journals, magazines, agents and editors will really get you down.
If you want to be a good writer, the most important qualities are self-reflection and the capacity to meditate on the human condition.
What life lesson has served you best as a writer?
The recognition that no person, event or occurrence is wholly good or wholly bad. This knowledge helps me create realistic characters and portray events more authentically. Most things (and people) are not all they appear to be.
Tell us a bit about your writing process: What inspires you?
I’ve been inspired by different things at different times in my life. But overall, I am fascinated by ordinary people who do remarkable things of both the good and evil variety. What makes these individuals move away from the status quo or create something new out of the old?  Writing about them helps answer these questions for myself.
Originally Published October 18, 2013
Advertisement