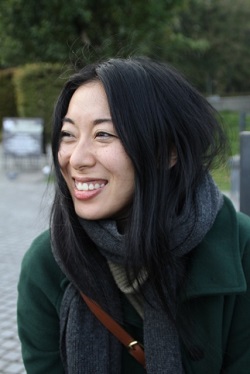 Katie Kitamura is a novelist and journalist. She is the author of two novels: The Longshot, about an aging mixed-martial-arts fighter, and Gone to the Forest, which follows a land-owning family in an unspecified colonial nation that’s slipping into the early stages of a civil uprising. Kitamura writes with a crisp simplicity that, as The New York Times notes, “crackles with a confined masculine aura.”

“Tom and his father remain,” Kitamura writes in Gone to the Forest. “His father does not believe in the city. The other farmers tell him to move out of the country, that it is dying in front of them, that soon it will no longer be safe. His father chooses to stay on the side of the land.”

WHAT’S THE MOST IMPORTANT THING YOU’VE LEARNED ABOUT WRITING?

Your fingerprints are all over your writing. You can write about characters and situations and settings that are entirely divorced from your own experience, but you will still write yourself into your fiction. The author is visible in the essential nature of a novel. This is something very simple and obvious, but it was difficult for me to accept. In fiction, you escape only to run into yourself, again and again.

HOW HAS THIS HELPED YOU AS A WRITER?

Among other things, it’s helped me write a novel in first person. I used to find writing in first person very difficult. It made me self-conscious, which is crippling for a writer. Then I realized that whether I wrote in first person or third, in a male or female voice, I was still exposed. I think I’ve learned to be more direct. Fiction’s not a place for hiding. Your skin is in the game, from the moment you begin.