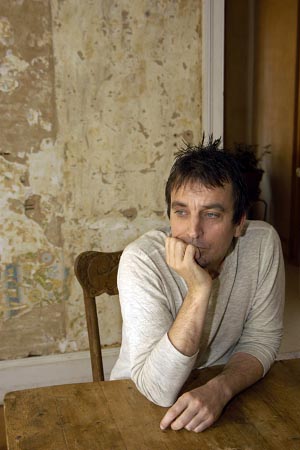 Nick Flynn is a memoirist, poet, essayist and playwright. His first memoir, Another Bullshit Night in Suck City – which won the PEN/Martha Albrand Award – meditates on his relationship with his mother and with his father, from whom Flynn was estranged until they reunited by chance when his father checked into a Boston homeless shelter where Flynn happened to be working. Suck City was adapted into a movie starring Robert DeNiro and Julianne Moore, with Flynn as executive producer – an experience he describes in his third and most recent memoir The Reenactments. In addition to three memoirs and essays in publications including The New Yorker, Flynn is also the author of several volumes of poetry, which, like his memoirs, are deeply personal and which have garnered awards including the Discovery/The Nation Award and the PEN/Joyce Osterweil Award.

WHAT’S THE MOST IMPORTANT THING YOU’VE LEARNED ABOUT WRITING?
One thing? I’d say that writing, for me, works best as a daily practice, at least when I’m on a project. When I’m on a project, it’s good to be immersed in it, to return to it, daily.

HOW HAS THIS HELPED YOU AS A WRITER?
The idea of a daily practice helps not just the writing but maybe everything; it keeps expanding, as an idea. I have trouble now thinking of anything that isn’t improved by making it a daily practice. That said, I also like to walk away from writing from time to time, to make not-writing a daily practice. I end up writing in the middle of my not-writing periods, which feels subversive.