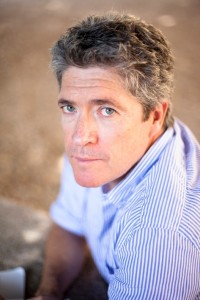 Peter Godwin is an author, journalist, documentary-maker and screenwriter. He was born and raised in Zimbabwe and worked as a human-rights lawyer there before becoming a foreign correspondent, during which time he reported from more than 60 African nations and from Eastern Europe, Asia and Latin America. He draws on this extensive experience in his books, four of them about Africa and one about New York City, where he now lives. His most recent book is The Fear: Robert Mugabe and the Martydom of Zimbabwe. The following is an edited version of our conversation.

I’m not sure if this is the most important thing, but one of the things I’ve learned and that seems to me to make writing qualitatively different from most other endeavors is that – and it’s sort of paradoxical – you can’t force it. You never quite know where your inspiration will come from. With most other things, if you just buckle down and go at it, you can eventually overcome it. But with writing, if you’re over determinist about it and if you overstructure something and you plan something too intricately, you don’t leave room for that serendipitous aspect of writing, which is that state of grace that writers all hope to experience. It’s why so many writers still talk about the idea of a muse. And you know when you’re writing well – God knows it’s not very often that one’s in this state – when you are in a state of writing grace, where the writing seems to be coming more through you than from you. I know this is sounding bizarrely cultish. I don’t mean it to. But you feel like you’re sort of channeling something, and it’s coming through you, and you look back at the prose sometimes, and you kind of wonder, where did that come from?

It’s also why people suffer from writer’s block and why writing is intrinsically so difficult. You can do that thing where you sit down and say, I’m going to write two thousand words a day, come hell or high water. But if you’re not careful, you’ll just embark on an extended series of literary throat clearings. And if you write ordinary stuff for long enough, then that’s going to become your default mode. Of course it’s true that you’ve got to put your bum on the chair. You’ve got to actually sit down and write; it’s not going to happen if you’re busying around all the time. But in the actual act of writing, you have to leave enough openness, enough mental openness, for things to go in often bizarre ways, to allow these oblique-angle things to emerge. And I think that happens particularly in fiction. Once you start to create characters, you have to be sure to give those characters enough agency to take on a form that is truly their own. In other words, they’re not just cyphers for you. You’re not moving them around on a chess board or making them founts for your didactic ideas, because if they don’t ever fully achieve their own identity, then the reader won’t believe in them as characters. This is why writing can be so infuriating and mercurial. This applies to some other art forms, too, I think – music in particular. Someone writes an amazing piece of music and then is unable to manage it again it for years and years. There’s this feeling that the stars have to be aligned. This all sounds like an excuse for writer’s block. So what are you supposed to do to get around it? Reading helps. But also just opening your mind, doing other things, often walking away from the piece of writing you’re working on. You know when you’re writing well, because once you start and it’s uppermost in your mind, even when you’re sleeping it’s still processing, marinating. You wake up the next morning, and you’ve thought of new ideas, new alternatives in a piece of writing. I think the truth about writers, in the end, is that often you have to be peripheral, to be prepared to inhabit the margins. You need that distance to maintain the focal length to look at what other people are doing. In social situations, if you’re constantly trying to be the life and soul of the party, the chances are you’re not being a good observer because you’re too busy inhabiting the moment. And even when you are observing, you need to remember to pause and write it down, to distill its essence. As Wordsworth said of poetry, it’s “emotion recollected in tranquility.” And to that extent, I think there is often something misanthropic about the writer’s life. You have to be prepared to embrace a life of solitude. Not all the time. But when you’re writing, that’s what is required. The book you’re writing at the moment has to inhabit the forefront of your mind, and the rest of your life has to recede into the background, at least for the period in which you’re writing the book. That can be maddening for people living with a writer, because writers are so clearly preoccupied a lot of the time. And you have to be. And I think it’s also why writers love going to writers’ colonies or retreats, where you can sort of leave your real life behind you and just sink into this thing you’re trying to create.

In memoirs, something I’d initially expected to be almost a footnote, a small aspect, has often developed into a much bigger scene. And something else I’d expected to be a very well fleshed-out episode or scene has turned out to be modest. These things take on a life of their own. You realize that you’ve got to be flexible enough to allow that to happen rather than fighting it off when it doesn’t conform to your preconceived sort of notion of how that chapter would work. For example, you’ll do some research that is very hard won: You’ll travel somewhere, or you’ll get a great access to someone or something, and it has taken you months to set it up or weeks to get there. And you’re determined to use that material, because you’ve sweated blood to get it. But in the end, if it doesn’t fit, you have to be prepared to walk away from it. And then there are other times where some little thought turns into something major. To allow yourself that space is, I think, the nub of creativity. It’s also scary and risky, because you’re building a house with no real blueprint, driving without a map, never quite sure where the hell you’re going.