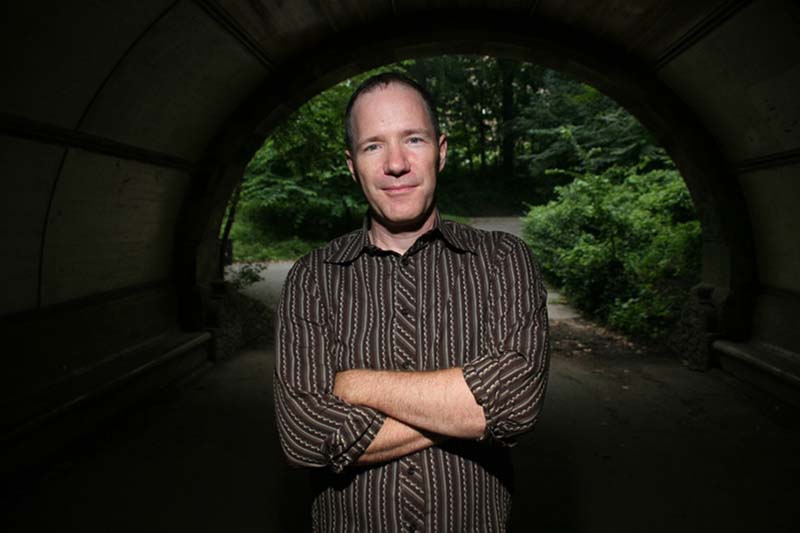 While writing his breakout novel The Ice Storm, set in 1973, Rick Moody allowed himself to listen only to music popular in that year, and he mostly confined his reading to popular books as well. The Ice Storm became a critically acclaimed best-seller and was later made into a feature film directed by Ang Lee. Moody is also the author of four other novels, a collection of short fiction and two nonfiction books. He is the recipient of honors that include the PEN/Martha Albrand Award and the Paris Review Aga Khan Prize. His prose is finely tuned, and he has a keen ear for the rhythm of language, which, along with rich and sometimes quirky descriptive detail, helps to create an immersive experience for the reader. Take, for instance, this snippet from his most recent novel, The Four Fingers of Death, about a baseball card collector: “The following year, because of minor league buzz, McClintock was brought up to the bigs as a platoon player for the Mexico City team. As a result, he was issued his first baseball card, by the venerable manufacturer of same, Topps, Inc. However, in a fit of misguided political correctness, the photographer shot him from the other side, so that the titanium arm was scarcely visible.” Moody’s latest book is the essay collection On Celestial Music: And Other Adventures in Listening.

To ignore the market.

Back when I worked in book publishing, before I finished my first novel, even when I worked at a certain rarified literary publisher, I often used to hear the question asked about a potential book publishing project, “Who is this book for?” People in these mercantile circles were always happy if they could say “It’s for the romance audience,” or “This is a mystery, and mystery readers are going to buy it,” or “This is for women in their 20s, who are all trying to get jobs and can identify with a plucky upwardly mobile heroine.” As if once the demographic questions were resolved, we could all breathe a sigh of relief. At last there is something scientific about selling books! Well, the more scientific the process is, alas for this writer, the less fun the book is to write. Everyone knows that writing novels is often less fun than a colonoscopy, and the one way to make it almost exactly like a colonoscopy is to write the novel to some hitherto existing idea of how the form works and for the carefully graded audience attached to a particular subgenre. If you are in the furnace of pure language, it seems to me now, you are in the place where new stories and new ideas about what storytelling is are located. It makes it a lot more fun to do the job. And, turns out, there are a few readers who like to visit that strange landscape too.