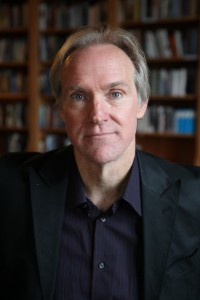 Tom Sleigh is a poet, playwright, essayist, translator, journalist and professor. His latest book, the poetry collection Station Zed, draws on his experiences reporting from conflict zones and refugee camps in Somalia, Libya, Lebanon and Iraq. His poetry has appeared in The New Yorker, The Best American Poetry and other publications, and has earned him accolades including the Kingsley Tufts Award and the Poetry Society of America Shelley Memorial Award.

It’s very simple. When I was in my 20s, I recognized that my best energy during the day was in the morning. So for many years, I tried to arrange my life so that I could have the time in the morning to sit down and work. As soon as you make a decision like that, you give a shape to your life that begins to make choices for you. In my case, I gladly accepted the consequences of those choices because the pleasure of writing was always so immediate, so long lasting and so challenging. I’m never bored. I may be frustrated or annoyed with what I write, but the pleasure in the process of writing (and reading) is as strong now, if not stronger, than when I first started out in my early 20s. If that meant I had to get up before dawn, or sacrifice going to a party, or skip a movie, so be it. And it had more serious repercussions: no children of my own – though now I have what I call my almost daughter because while I’m not her biological father, I still feel like I’m her father. Her almost father, let’s say.

And because I’ve written mostly poems, that morning time also brought me closer to that in-between state of half-dream half-awake, who-goes-there sense of alertness and attentive listening that always comes when I’m hearing how the words ought to sound – even before I have any palpable subject in mind or sense of a theme. It’s the premonitory music that accompanies, or lures, or entraps an emotion, an idea, some physical sensation.

As a poet, I’ve always had the time to write because I’ve made the time. Because I’ve made myself available almost every day for the last 40 years, those voices feel encouraged to come to me. And even if I’m distracted, those voices will insist that I pay attention. The way a cat comes along in the morning and bats you on the cheek to wake you up – just the edges of its claws sharp against your skin – that’s how the voices in poems announce themselves. And then I concentrate on what those voices say, and how they say it, and how I can be more faithful to what’s being said by trying to go deeper into the material. In my case, it could just as well be the length of a line or a stanza shape or a rhyme scheme that leads me on, as much as it could be a sense of something definite to say.