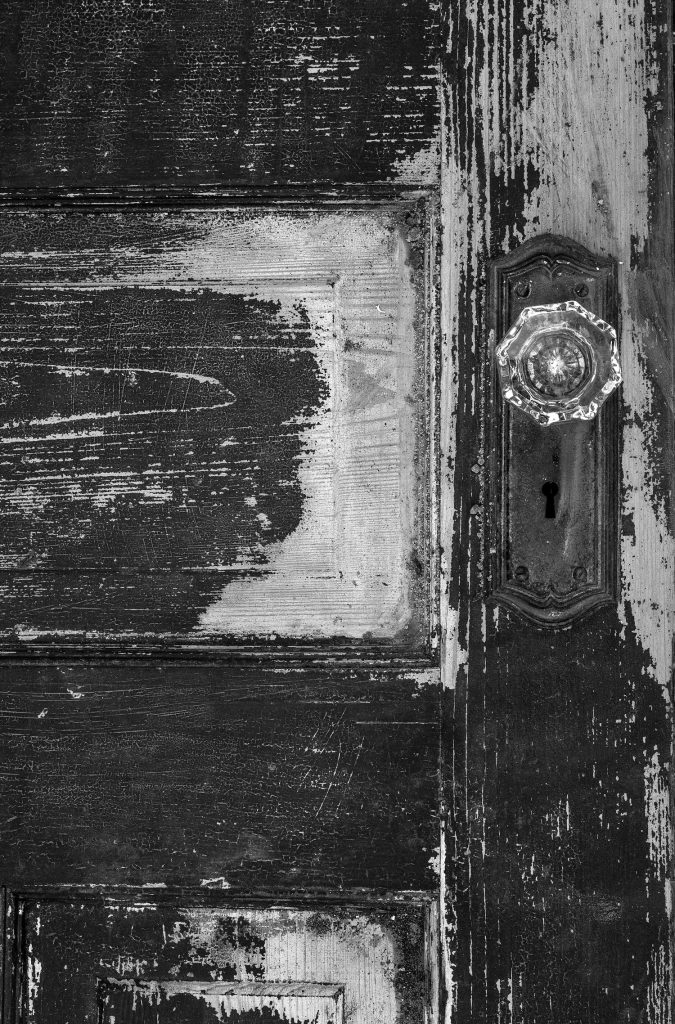 My occupant left me yawing wide today, banging in the autumn winds, my acanthus doorknocker pocked with rain. She has been doing this often of late. It was not enough, apparently, leaving me unlocked and then ajar. Now I must yaw. At first I reasoned she was distracted by familial woes, by clients wanting an impossible renovation: farm to hotel, condo to castle. But no. She is spearheading a movement that calls for our annihilation. Destroy the doors! Such is her battle cry in those magazines of Hearth and Home. Change not the locks. Change these archaic concepts that enforce enclosure and compartmentalization.

What nonsense. What wordy rot. This is exactly doorness: Enclosure. Compartmentalization. She writes as if we have a secret nefarious agenda, as if we are a cabal of doors. What about walls? They do all that and then some. And they are scarcely as noble and useful as we doors. Worthy and stalwart, yes, but have you ever conversed with a wall? And what did it say? Very little? There you go. Sometimes they weep faint trails of moisture. “Hard to bear. Hard to bear,” they sigh, their lamentations muffled by plaster and lathe. They have little taste in culture or art; they never open up to anything. This is not their fault. The back of artwork and mirrors is all they ever see. Though once, a month past, my occupant rushed in and turned that one framed image of the mother occupant towards the wall. “At last. At last,” the walls sobbed out. “How beautiful she is. How terrifically great.” She is neither. She is built like side hutch. She has the smile of a radiator. But the walls have no comparison. She is the only mother they have ever seen.

My occupant arrives, all smugly proud that she need not set down those rolls of renovation plans the size of dryer pipes and fumble for the iron key, that she can stride straight on into the vestibule. Such freedom, such “thoroughness” – this being a term she has coined and hopes will be taken up (it has not).

In the vestibule, she does not kick off her wedge-heeled slingbacks, a recent change in ritual. Formerly, in deference to the antique heart-of-pine floors, she read the no-shoes riot act to all comers. Only stocking or bared feet were permitted. This was a deeply misplaced respect. Floors are masochists, the lot. They thrill in the thud of boots, the tear of runners, the sting of high heels. They will move, inch by inch, those brogans, those stilettoes to the mid of halls and bathrooms. “Put your god-awful things away,” the mother occupant would yell at my occupant when she was young and the floors would beg her to pound them with her gaudy, ruby-studded shoes. She obliged and often cried out: “I want to go home!” in mimicry of her heroine in that old movie where things speak that should not.

“You are home sweet fucking home,” the mother occupant would say. “Not swell enough? Not your style?”

The mother hid the ruby shoes in the pantry, but the floors found them and inched them into the living room, where one day the brother and sister occupant were wrestling in jest. The mother laughed, her glass sloshing. What a party! What dandy fun!

The jest turned to threat. The fun to fury. Kids. They swing like unhinged shutters in a wind.

The brother occupant tripped over a ruby shoe and crashed through the picture window, its annealed old glass shattering into rapiers. The brother occupant never darkened us doors again. The floors were wracked with guilt and swore to behave. The walls vowed to bear greater and greater loads. As for the windows? They all paid the price for the one’s failing, even the clerestory windows that let in such opaline light. All were destroyed. The replacement windows – tempered and double-glazed – bestowed pithy, glassine wisdom: Look on the bright side. Take the long view. The dullards. As if they knew. As if they understood.

As for my occupant, she lay stiff as an ironing board in her bed, her child eyes beholding the ceiling, perhaps to find solace. Ceilings, however, consider themselves above such terrible happenings. They aspire, I have heard, to be artists of the avant-garde, though I would say they are more of the illusionist camp, what with their riverine cracks and Roche test stains.

Still, I pity them. The ceilings have never known the touch of my occupant’s hands. And though they reach up twelve feet high, even they are not good enough. They are to be cathedraled. They will be forced to soar. It is all in those plans she holds in one hand. In the other she holds a glass of decent Chablis. She walks, still in her slingbacks, to the upper landing of the stairs. Her copper hair drapes over her eyes. She is not looking down to the first tread. She should.

I have avoided speaking of the stairs. And for good cause. They are saboteurs. Assassins. They kill more of their occupants than rickety old glass, more than those automobiles that dwell in the driveways beyond. They are built on thwarted ambition, stairs are, for they long to go places, but in truth they go nowhere. Up. Down. That’s it. When an occupant ceases to look down upon their glorious stairness, when they take them for granted, that is when their treachery comes full fore. Count the treads, then the risers. Count them again. It is not your sorry arithmetic. It is the stairs. They shift; a brief recalibration of reality is all it takes. Anyone can do this.

My occupant halts, puzzled, and balances her wine glass on the newel post. It is as if she has heard my concerns. She considers the walls, the doors, the ceilings, the floors. Even she can see it will be a darn shame. But one must move on. One must restore and renovate. She touches that turned-to-the-wall photo of the mother occupant. It is my occupant’s house now, every stud and crossbeam, and has been ever since the mother occupant died alone in the upper-most room, her only true companion a shy pocket door, one of the last of her kind, who shushed the mother past the last dark doorway.

And so the walls are to be sledgehammered down to allow ‘flow.’ The floors are to be crow-barred up, on Monday no less, and recovered with a banal and seamless laminate that will be content with espadrilles and slippers. The steep, old stairs with their ornate balustrade are to be torn out and replaced with modern stairs – wide and broad-treaded and guarded by acrylic sheeting. The old stairs are not having it. They will not go gently into the kindling light. They want to survive. Don’t we all.

And we doors? We are to be ripped from our hinges. Our service forgotten. We are to be replaced with peculiar mazes that will do the noble task that we once did: opening. Closing. Protecting.

She sees me at the end of the enfiladed hall. She sips her wine; her teeth tap the glass in agitation.

May I boast? May I declaim? I am not a garden-shed variety door. I am not one of those gossipy hollow-core doors. I am not a thuggish metal door, nor a closet door that folds at the least provocation. I am a front door of rail and stile, mortise and tendon. I am the Lord of Doors. My doorknob is of octagonal crystal. My acanthus knocker is of solid patinaed bronze. I boast an entourage of lofty pilasters, a transom of Tiffany glass, a keyhole wrought in an open-die forge. I am honed from a single white oak, a towering giant that was felled nearly two centuries past. And no, we doors do not recall once being trees any more than my occupant recalls once being an embryo inside her now-dead mother.

And my hue? I am vital vermillion now, though beneath that are layers of turquoise haze, night-watch black, and schoolhouse green, my occupant having run through many cans of designer paint to perfect my doorness. But I will never be good enough. I will never be exactly right.

She steps down onto the first tread. She does not grasp the oak banister; her hands are too taken up with the wine, the plans.

The stairs bide their time.

I should warn her. But, no, no, she intends to change me into a tabletop, a birdhouse.

She reaches the three treads of the kite-winder. The tread below them shrinks back. The riser drops down. Surely she hears that sinister creak. Surely she recalls how I let her pass those coded messages under my sill to the little brother occupant. Where is the gratitude? The loyalty?

She presses back her hair. She sips her wine. Her knee bends.

They would stare at each other through my keyhole. Who would blink first was the game. Yet, if I save her she might still take an axe and split me in twain. She might burn us all to the peat-sogged ground.

Her foot wavers on a void.

I muster every bit of my brass and wooden might. My sill drags on the landing. One inch. Another. The threshold is so terribly distant.

My heartwood splinters. WHAM! I slam into my casing, just as she shrieks and pitches forward. Her wine glass shatters; her renovation plans fly round her. She tumbles and tumbles, and lands with a thud in the hallway.

She is still as cement.

The walls whisper out concern. The windows rattle with advice. The ceiling gaze down, all dispassion. The floors creak as if trod upon by a hundred anxious ghosts.

Finally she stirs. She whimpers. She sits up and grasps her calf, wipes away the lattice of blood, and then tests her bones and pushes herself up from the creaking floor. She leans against a stalwart wall. She gazes at the ceiling, so far beyond her reach. She curses the stairs. She gathers up the plans. Weeps for a time and then dabs her eyes. And now she listens for once. She hears us. I do believe she does. We have purpose. We have needs. No one wants to be replaced and tossed away.

She limps through the vestibule and studies me, my closedness. She turns my crystal knob and opens me up, her hand caressing my mullion as she does. She steps over my sill and onto the outer landing. But then! Then! She leaves me yawing as wide as ever before. Has nothing changed?! I saved you just then! If not for me you would be dead as a cinder block.

And then she pivots as if slotted on a dowel and shuts me fast. Out comes the heavy iron key. And at last, at last, that longed-for clunk as she slides my deadbolt home.

Claire Mulligan’s first novel, The Reckoning of Boston Jim (2007), was nominated for the Giller Prize as well as the BC Book Prize. Her second novel, The Dark (2013), was nominated for the Canadian Authors’ award. Her multiple-award-winning short fiction has been published in The Hourglass, The Tulane Review, Grain, and The Antigonish Review, amongst others. She lives in lovely Victoria, BC with her three kids.