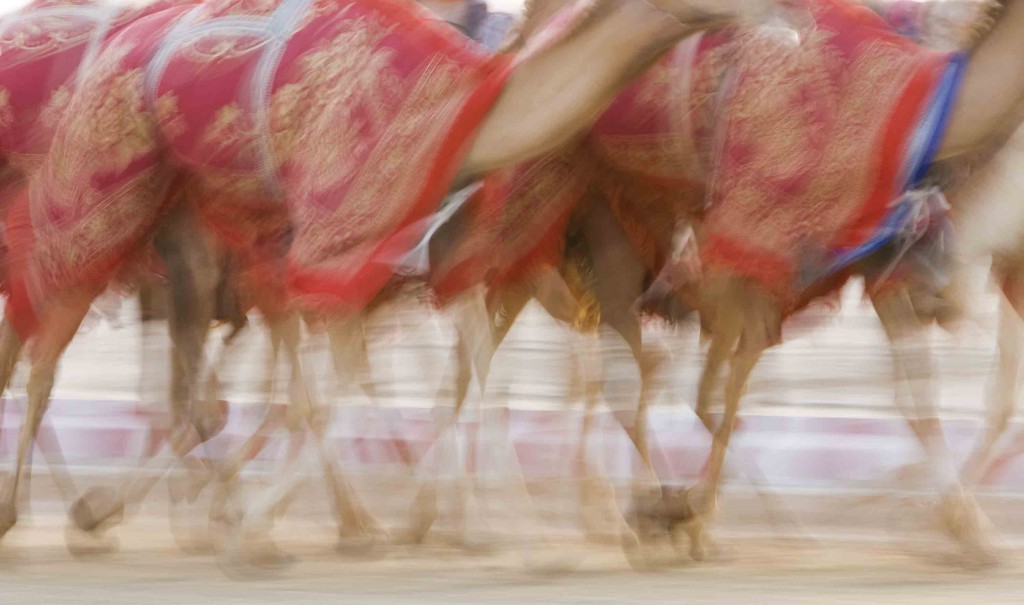 Not 10 minutes after we arrive at the camel racing club, Edie says the second wrong thing. She’s already in the wrong section, the men’s VIP viewing lounge, and surrounded by blinding tiers of Kuwaitis in white dishdashas. She insisted. I was hoping she’d behave.

Dhari gives me a look.

“You should control your woman, Daniel,” he says.

I cringe but say nothing. I don’t know whom to defend. Edie refuses to check her words even in delicate situations, a persona she’s been developing since we arrived in Kuwait a few months ago, hired by an international school to teach wealthy Arab kids. I know it’s just painted on, and there are worse places to be the say-anything-go-anywhere-I-want woman, but these oil-rich men in their impossibly clean outfits are our hosts.

The race begins with a crackle of noise from the PA system, drowning out my attempt to rebuke her. Quick decision, in the end. Dhari is the emir’s grandson, and he lets me drive his biggest, fastest, most expensive toys. Edie just pushes, pushes, pushes, even at home.

I go out a lot. No man should smoke alone, Dhari said the day he discovered me wreathed in grape-flavored shisha smoke in a gloomy neighborhood café. He was slumming it away from his palace, trying to blend in, and used me as camouflage. We met up again the next week, and the one after that, and soon enough it was every other day. Shisha became Ferraris and Bentleys, ridiculously ornate meals, expeditions on yachts, racing boats that move faster than thought. He supplies Edie and me with the bacon and booze that’s supposed to go to the embassies but sits in a government warehouse instead. We went falconing once, the raptors tracking back to the camel-hide gauntlet with prizes of raw rodent meat.

The camels raise a plume of dust, obscuring the desert behind them, and lope around the final curve toward the finish line. Robot jockeys, remote-controlled, boy-sized contraptions, whip their reins across the hides of the yawning beasts. A herd of SUVs runs just behind, drivers and controllers invisible behind tinted glass. Dhari eases his bulk from the leather viewing chair and yells at his camel, his jowls quivering. I can’t tell which animal to cheer for. You must come – these are special races, he said a few days ago, dismissing my weak refusal. I’d already been to the camel racing club on a trip arranged for the new teaching staff. Edie stayed at home that time with a headache from all the dust in the air. In the city we get dust storms. Out here they’re sandstorms, clouds of tiny pieces of shell and gritty debris that will scour the skin from your face.

She’s forgotten about politics and is cheering like the men. Up from her seat, yelling at one of the anonymous animals to get a move on, that all her dinars are riding on it, that Baby needs a new pair of shoes. That one gets me, and I rub something from my eye. The men are distracted from the race by her antics, so when the first camel crosses the line she’s the only one yelling.

“Dan, did you see it? My guy passed everyone. We fucking won!”

As though it was a big payday, even though none of our money ever touched the track. I look at Dhari and give an apologetic shrug. He makes a sucking noise behind his teeth.

“This is not how a woman should behave,” he says.

She asks, “Are there any more races? Can we bet on the next one?”

Dhari shifts, looking at her with renewed interest, as though he passed by a tarnished coin earlier and has come back to find it polished.

“Hell, yes,” she says. “This is the first interesting thing I’ve seen in months.”

We’re not married, although our employment visas say we are. She picked me up in a bar one block from the Hamilton courthouse where she finalized her divorce, one hour after I was suspended with pay pending the outcome of the school board’s investigation. We talked about teaching, other things. She listened, chose not to judge the blurred line between accusation and conviction. We moved in together a week later, then shifted our lives to Kuwait last year. The school needs bodies at the front of classrooms; they don’t background-check too thoroughly.

I’ve never seen her this excited. She was calm when we met, calm even when we saw the blue line on the pregnancy test a couple months later. Calm when she spoke about naming her stillborn daughter Lily, about the broomstick her ex-husband used on her still-swollen belly at home afterward, screaming that he wouldn’t let her kill any more babies. She was calm through our miscarriage, telling me it was better not to have met Echo, our in-utero code name for the baby. There were a few days of bleeding and expelled pieces of fetal tissue, and we tried to act as normal as possible, going out for drinks, a few meals, a movie. Later, I said, Maybe it’s my fault, maybe I hit you in my sleep. She looked at me like she could spit. It has nothing to do with you, she said. I’m the one who’s been turning off the lights and flushing bits of Echo down toilets all over town. Kuwait seemed exotic when we signed the contracts, a desert escape to a new kind of heat.

“I thought betting was haram,” I say to Dhari.

She rolls her eyes. “You and your efforts to integrate.”

Her charade prevents her from using local words and phrases, and she’s annoyed whenever I try. English is her armor, even when the effort it takes is comical. The chopped up salad with parsley and tomato and onion, she’ll say to the pained waiters. Barbecued meat, flatbread, chickpea spread. Never kebab, never schwarma, never hummus.

“Is betting really prohibited here? So many things are,” she says.

Dhari makes a waving motion with one hand, as if to say, nothing is totally forbidden.

He asks, “How much were you thinking of investing?”

“How much did we bring, Dan? Enough?”

The men have taken their seats again, and a small army of dark-skinned servers emerges from somewhere to serve refreshments. Conversation swells excitedly and we’re ignored, Edie’s misdemeanors forgotten. She refuses the food and drink and looks at the dates being dipped into camel’s milk. Shudders theatrically.

I’ve sat cross-legged with Dhari in musty Bedouin tents, so I know that the milk is warm and fresh, a desert tradition. I want to apologize again for her, but this time make Dhari hear it. I might apologize for everything, right back to when she insisted on accompanying me into the men’s lounge over my whispered protests. She just snorted. You’ll probably ask me to put on a burqa next. That was the first wrong thing she said.

Dhari slaps me on the shoulder and leans forward excitedly.

The camels are paraded in front of the viewing stand in a long line. There are no robots this time. Instead, young boys ride atop the animals on full saddles and tack, waving timidly to the grandstand. Around us, the men point and chatter at the mounts, no doubt making boasts and laying claim. The boys are no more than 4 or 5 years old, tiny things with legs like matchsticks bouncing against the flanks of their animals. Now the day makes sense, the strict security at the gate, the presence of only purebred Kuwaitis aside from Edie and me. Just a notch higher on my new friend’s list of things he loves that aren’t quite legal. I thought he was bragging when he spoke of whores and hashish, anything I want.

I hear myself saying something stupid about the legality of boy jockeys.

“Yes, but you can buy one from me, if you wish,” Dhari says. “Perhaps next time – if you bring more money.”

“I just wanted us to have a nice day away from the apartment,” I say.

The boys and the camels are led away to the start line, barely visible across a stretch of bright, hard desert. I turn toward Edie to apologize. Chattering away to Dhari about the jockeys, she doesn’t hear. She wonders aloud, her voice low and calm, how common it is to find them in private homes.

Brent van Staalduinen is the winner of the Bristol Short Story Award, the Fiddlehead Short Story Prize, and the Short Works Prize. He is the author of the novel Saints, Unexpected and his short work appears in such notable journals as The Sycamore Review, The New Quarterly, Prairie Fire, EVENT, and Litro. After a number of years abroad, he now lives with his wife and two daughters in Hamilton, Ontario, Canada and teaches in the writing program at Redeemer University College. Web: brentvans.com

Read our interview with Brent van Staalduinen about writing “Pieces of Echo.”