“Starships and Innocence” by Chad Durling was the second-place winner of our “Lesson Learned” short story contest. We hope you enjoy it.

Gary came up around the corner and saw the bubbles forming into oblong shapes as they wound around the trunk of the old tree. He had never seen anybody in the orchard before, but he knew Evan Foster would be there.

The bubbles trailed forth, all determinedly and all in a row, as Gary stalked up the old dirt road with the grass growing down the middle. His back was curved and withered, and if he wasn’t wearing a shirt it would’ve been known that his skin was scaled like a garter snake. He wasn’t working today because so much rain made the hay wet. Everybody knew you couldn’t bail wet hay.

So, he was stalking up the old dirt road instead.

He approached the trunk from a spot where he wouldn’t be noticed, and he stuck his ringed finger out to pop what he mistook for a bubble.

When Gary showed his head around the tree the boy looked up with a freckled face. Evan flung the cigarette from his mouth and then patted at the ground with his hand. He was afraid the grass would catch on fire and he’d be the cause of his father’s orchard burning down.

“Impressive smoke rings,” Gary said as he sat down on the warm ground.

“There’s an ant hill there,” Evan said. He watched the old man shuffle over. “Piss ants,” the boy added.

“I didn’t see you, Mr. Webb. I thought you were probably helping Dad with the meat.”

“I know you didn’t see me,” the old man said, smoothing the wide knuckles of his right hand with the fingers of his left. “That’s why I came up: because I knew you wouldn’t see me. I wanted to see what you were up to.”

“Just staying out of the way,” the boy said. “Nothing,” he added.

Mr. Webb put his hand on Evan’s shoulder and the boy shrunk under the weight. “Your mother catches you smoking up here she’ll make you eat them. You know that’s what your brother got – right?” he said.

“He turned out all right,” Evan said.

“There’s nothing right about that kid,” Gary said, softly curling his fingers so that they dug into the flesh of Evan’s shoulder.

Evan cringed. The cringe was mostly from Gary being right, and partly from him being other things. Nobody really knew, but everybody liked to tell stories like they did. The man had been helping Evan’s father since when the farmhouse had the porch built on the front of it. That meant he was around before the barn was even around. His face showed it too: the work he had done and the things he probably shouldn’t have done while he was supposed to be doing the work. But he was a good worker. There was something to be said about a man who could push a wheelbarrow all day. Evan didn’t know what could be said because he didn’t like to say much, but there was something to be said.

“What’re you thinking about?” Gary asked.

Mom always said that was an intimate question to be asking, the boy thought. “Nothing,” he said.

Evan plucked a dandelion from beside a rock by his thigh; he popped the head off and then put his thumb briefly in his mouth. Mr. Webb was staring in the boy’s eyes and trying to figure something out.

“I came up here to get you,” Gary said after a moment. “Your father’s coming up with the truck. He wants you helping with the meat.”

This time it was Evan staring at Mr. Webb’s eyes and trying to figure something out; that didn’t happen often.

When Evan was packed into the middle of the truck’s bench-seat he didn’t look in anybody’s eyes, and that did happen often. His father had a clenched hand on the wheel, Gary had his sleeve rolled up and his brown arm hanging out the window, and Evan just stared straight ahead – all the way to the barn. It’s always easier to just sit with your hands in your lap.

“Can’t you do something about the damn chickens always getting in the damn driveway?” Evan’s father said as he shifted the weight of the truck to the left, causing his son to slide into him and then bounce back.

“Yeah, I can fix the door if you give me the wood to do it,” Gary said. “Fox in the pasture do it for ya anyway,” he muttered under his breath.

“You know where the gun is,” Evan’s father said as he jammed the gear-shift on the steering column into park and hopped from the front seat. “Come on – Evan,” he said as he licked his dry lips and rested both his elbows on the sill of the truck’s window, looking in.

Evan contemplated running up the sloped driveway to the house, maybe even running down the horseshoe driveway and into town. That wouldn’t work in a town of five hundred and three people – give or take somebody having a kid – because somebody’d talk. If his mother knew he was at the barn with his father and Gary Webb there’d be trouble. Evan wasn’t supposed to be at the barn. Evan wasn’t even in school.

When his father opened the white door the boy stepped onto the straw-covered concrete floor of the barn and that made him in the barn. He saw the cow in front of him through its square hole where the water and hay was dumped. It looked up, chewing. The other two windows were empty. The cow was all brown except for a small white patch by its pink nose. Evan remembered some white on its belly too. It was Starship and it was sixteen months old, or in other words – tender.

The rough grain of the wooden-handled hammer slid into Evan’s hand as he stood with his palms still by his side. He didn’t look up at his father as the man chewed gum, or at Gary who was giving two chickens ‘the stare-down’ in the easternmost corner of the barn. The two men had seen it before. But then they stopped the gum-chewing and the chicken-staring and looked at the boy with the dull hammer because they hadn’t seen it all before.

“Between the eyes,” Evan’s father said. “Hit her hard. Do a baseball swing.”

Starship moved back into the darkness beyond the hole.

“Dammit, Gary. Get in there and hold her head.”

Evan watched as Mr. Webb traipsed to the back of the barn to come up behind Starship. He had his hands around her thick neck, and he faced her forward so that he eyes were directly lined with Evan’s.

Mr. Webb was nice if Evan didn’t think about it.

Starship was a friend if Evan didn’t know about it.

School would’ve been fine if Evan hadn’t talked about it.

He brought his hand to about the middle of his chest, and then the hammer slipped from the grip of his sweaty fingers. The metal head clanged on the concrete. The boy’s father sighed a deep and heavy sigh.

“Starships & Innocence” is a story about the places children wish to go and the ways they try to get there. It’s partly inspired by the many years I spent with my late grandfather on his farm. Mundane work is portrayed in the same bleak way as I once saw it, where life is lived through simple, routine tasks led by seemingly simple people. It’s a story where words like “meat” and “hammer” challenge a young imagination to create new realities and faraway locales. This is a place where people’s interiors are fabricated by hearsay and the things they do that aren’t understood – yet people attempt to understand anyway. The boy, Evan, seeks to live a life twice removed from reality during an onslaught of responsibility. Life and destinations can be shattered just as they are created. 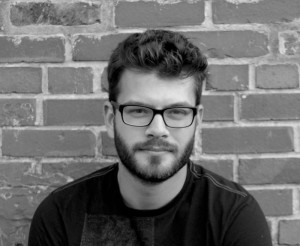 Chad Durling was born in the quiet Annapolis Valley of Nova Scotia, Canada. His earliest memory of writing is grade two, in which he recalls his teacher saying the words “came straight from his head, down his arm, and out his pen.” Thinking back, he thinks (sarcastically) that that’s an awfully simplified way of summing things up. Chad was the third place winner of Grain Magazine’s 26th annual contest. In 2013, one of his short stories garnered an honorable mention in Polar Expression’s national contest. He also has five short stories published by Polar Expressions Publishing in three separate anthologies.