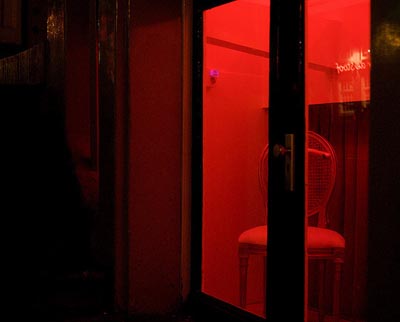 “A gentleman is only a wolf with patience.” Werner stood to the side and with a sweep of his arm, let the girl start up the stairs before him. His cavalier stance belied the pounding in his chest. Scanning the parlor, he noted the walnut furniture, rich brocade and etched glass lamps – all signifiers of a nobler past, before a red light bulb found its place in the street-level window. Another man sat on a divan across the room, legs splayed carelessly, knee bobbing. One hand covered his eyes, kneading his forehead, his whole body preoccupied with waiting for a night in a whorehouse.

Werner’s practiced disinterest returned to the girl in the skimpy dress, wrong for the late September chill. He followed her up the staircase where an old brown dog and an older woman, faded like the end of autumn, looked down at them. The girl turned back to him.

“You don’t have to be any kind of gentleman with me, captain,” she offered, leaning her full bosom in his direction, even as her eyes skittered away. Werner nodded upward and she continued ahead of him, stopping only to accept a towel and room key from the old woman.

“I’m not going to be in a hurry,” Werner said to the old woman as much as to the girl.

“You’re paying,” said the girl, flouncing into the room at the end of the dim hall.

“Yes, I am, and I’ll be paying all night.” Werner glanced at the alley below the window as the girl closed the door. “I told the Fraulein downstairs I wanted the best. I gave her extra not to have to hurry. What makes you the best?”

“We could talk about it, or I could show you,” she said, impertinence replacing her earlier hesitation. She drew the loose strap of her dress down over her shoulder, the mound of an ample breast revealed.

Werner stood still, only the glint in his eyes signaling desire, but it was enough. The girl approached. He pushed her thick blonde mane back and drew his finger down the milky skin of her neck, over the exposed top of her chest. He hadn’t expected to enjoy the time he’d needed to buy.

“You’re new. I haven’t seen you here before,” said the girl, as she unbuttoned his coat. “They aren’t sending many new soldiers here anymore.”

“And you don’t sound like you’re from around here at all,” he replied, turning her around, his lips grazing her neck, his hands cupping her breasts from behind. Stuttgart he guessed. Get her talking. Work her up at the same time…slowly. His gun was strapped around his chest to the side. He needed to remove it, place it strategically.

“I’m from here now. That’s all that matters, isn’t it captain.” She was smart and confident and careful, all with siren subtlety.

A German officer wouldn’t say more. Werner was silent as he expertly slipped the dress off the girl. Boots scuffed down the hall and entered a room across the hall. The restive boy from the parlor. Karl listened as he kissed.

The girl swiveled her hips against him and he exhaled the quietest of groans. Holding her close with one hand, he used the other to shed his coat. With a quick twist the strap of his holster slid off his shoulder, and turning from the girl he draped the coat expertly over the gun and lowered it to the floor. He drew the girl to the bed.

In an hour he lay damp next to the girl, his listening compromised by the sound of blood racing through his own veins and the hard breathing sighs beside him. The best of the house was an expert and interesting lover. He’d gotten what he’d paid for. He was hungry, and thought he’d made the girl hungry too. Drawing the bed cover around his waist, he unlocked the door and called to the old woman down the hall.

“Bring us some wurst or whatever there is here to eat. Beer if you can find it. Leave it at the door and knock.” He turned back into the room, locked the door and retrieved a cigarette from his pants. He’d been careful to bring only the lousy Dutch Reemtsma cigarettes, even though there seemed to be Lucky Strikes everywhere among the German officers.

The girl lay on the bed, almost relaxed, he thought. Her eyes opened and before she could speak he said softly, “Sleep a while. We have a long night together.” Seemingly satisfied, she closed her eyes and a small smile settled over her features.

Sophia! A stab of recognition caused Werner to inhale sharply, acrid cigarette smoke stinging his lungs. This girl resembled his parents’ former housemaid, who had been his sexual tutor. Always aroused as a young adolescent, Werner had learned early the privileges of male members of their bourgeois household. Sophia had been respectful but assertive, drawing him in without making any demands. Hours with her had given him generous escape from the mounting disaster in Germany that eventually forced Sophia to leave, and Werner’s family to escape Germany. In one brief year, she had taught him to freely enjoy himself, while artfully giving pleasure to a woman.

He was vigilant, just as he’d been in those days, listening for noises that signaled interruption, danger. Then it had been his parents returning from the opera. And now…

Food, surprisingly good homemade beer, another languorous episode with the girl in bed and, dangerously, a brief plummet into sleep brought Karl Werner to the lonely center of the starless night. The girl was snoring in earnest now, curled along his body.

In the silent dark, Werner summoned scenes of the previous thirty-six hours. At first, all had gone perfectly. He’d parachuted directly on target, five miles behind German lines. With his native tongue, and officer’s uniform, he’d extracted from a forest warden the location of the antiaircraft bunkers that were downing American planes. Then, he’d entered a camp as though he owned it, introduced himself with false papers and orders and from conversations at dinner in the officer’s mess, he’d memorized details of a planned pullback in response to American pressure from across the Rhine. The talk was interrupted by a burst of agitation when a messenger brought news that a spy was likely nearby. A local farmer, plowing corn stalks into his field, had found a buried parachute.

Werner had listened long enough to hear what was known about the spy: nothing beyond the parachute. The officers resumed their conversation and Werner stayed long enough to make his departure unremarkable. Rendezvous was still twenty hours away. He had all the information on troop strength and artillery placement that he’d come to ascertain, stored in the same clever mind that had been useless to him in school. He wanted to run, swim and disappear across the Rhine right now, but they’d be looking for the spy everywhere. He needed to buy a night and a day.

Of course. What had he learned early in counter-intelligence training? Use what you know from your former life to hide in plain sight. Where there were soldiers in a town, there were women to be had. He carried only the papers of a dead German intelligence officer named Karl Werner. That and a small roll of German marks would buy a night.

The girl stirred. Her hand moved across his hard belly but he caught it and pulled it behind her, rolling her onto her back. He leaned over her and buried his face in her generous bosom, chuckling as she became aroused. Then the ghost of a sound, the barest sigh of a scrape on a floorboard stopped him. He clamped his hand on the girl’s mouth and put his finger to his lips. He motioned her to the far side of the bed, noiselessly gesturing for her to disappear into the space between the bed and the cupboard. As though she’d done it silently a hundred times, she was gone.

A soldier was in the room and shot before another moment passed, the broken door swinging on a single hinge. Werner charged into the hall and, finding it deserted, turned back into the room, dressed and ordered the girl to help him. American dollars appeared from a false pocket under his officer’s insignia.

Her shocked expression held a spark of interest. “Where are you from?” she asked as she pulled on her dress.

An hour later, Werner Rosenfeld slipped into the icy waters of the Rhine.

ABOUT THE AUTHOR, BARBARA STARK-NEMON 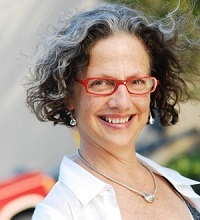 BARBARA STARK-NEMON grew up in Michigan, where her family listening to family stories about life back in Germany. The stories became the inspiration for her first novel Even in Darkness. She lives, writes and does fiber art and photography in Ann Arbor and Northport, Michigan. “’A Wolf With Patience’ hinges on a heightened sense of time and danger,” says Stark-Nemon. “I found I had to return to every sentence, every word, until the writing was as taut as the character’s vigilance.”

“This story very successfully follows the suggestion that it be concerned with ‘duplicitous acts, binary oppositions, communication with the “other side,” double indemnity.’ I felt I was in the hands of a stylish writer. I was taken with the phrase ‘an older woman, faded like the end of autumn.’ The character Karl Werner lives in the ‘lonely center of the starless night.’ It really is a story about a man hiding in plain sight. The ending is ambiguous – and perhaps a little rushed.”

Click here to read the 3rd place story, “Good for the Soul” by Brenda Sinclair Sutton.