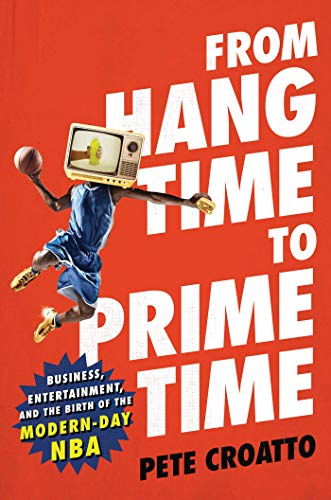 Next month, my first book, From Hang Time to Prime Time, comes out. I had dreamt of writing a book in the way some folks dream of traveling to the moon or winning Powerball. It would be nice to be in that position, sure, but getting there seemed incomprehensible, too foolish to consider.

Yet here I am. And you can be here, too. Really. Now that I have some distance, I can see that writing this book was a lot like pitching an article. The difference: It took a lot more time – seven years – to go from hazy idea to tangible object.

This is how I did it.

I found a larger theme in a smaller story.

In February 2013, I wrote a feature on Marvin Gaye’s rendition of the national anthem at the NBA’s 1983 All-Star Game for Grantland, ESPN’s now-defunct pop culture and sports website. I was pleased with the story, but a larger element remained unexplored. The anthem – unapologetically Black, unabashedly nontraditional – felt like the turning point in the NBA’s evolution into the world’s cool sport. I wanted to know what happened before and after.

I filed that idea away. When I swapped texts with a source who advised that what I had in mind sounded like a book, I felt galvanized.

I built a foundation – and got paid for it.

My journalism professor at the College of New Jersey, the late Bob Cole, said that clips were like checks you can cash in. In 2013, sports-related clips at Grantland, The New York Times, and Philadelphia Magazine allowed me entrée to write stories elsewhere that doubled as research for the book.

For SLAM, I wrote about the 1984 Slam Dunk Contest and the Old-Timers Game, two events that figured prominently in the NBA’s rise in popularity. For RollingStone.com, a gigantic oral history on Salem Sportswear provided insight into how the NBA used apparel as marketing. These and other stories yielded future material for the book and, more importantly, sources who trusted me.

I realized that no book had covered what I wanted to explore.

There is zero downside to reading. You learn about style, squirrel away unplumbed facts that deserve intense treatment, and walk away with knowledge that has unanticipated benefits.

Also, if you read enough books on a subject you love, you have a wonderful idea of the marketplace. I had read basketball books for decades. The topic clinging to my brain had never been addressed completely. That gave me additional confidence that this book could work.

I honed my pitch.

Mark Rotella, a friend and my longtime editor, loved the idea and encouraged me to write a proposal. I set aside two weeks to get that down.

I asked for assistance.

Sometimes you need help to tweak a pitch or to find that right outlet. That applied doubly here: I had no idea what I was doing. Mark, a veteran author, reviewed the proposal and made suggestions. Jeff Pearlman, the bestselling sports biographer, passed along one of his proposals to help me out. Later on, Jonathan Eig, the author of Luckiest Man, advised me on how to write a sample chapter.

I expanded my network.

A freelance writer is only as good as their streams. The writer who only fishes for jobs on job boards will starve. Places such as Study Hall and Freelance Success provide a wealth of leads, advice, articles, and good, old-fashioned camaraderie to satiate the freelance writer. Sonia Weiser’s freelance newsletter is another wonderful roundup of leads resurrected from Twitter feeds far and wide.

Thankfully, I became a member of the American Society of Journalists and Authors in late 2016. It’s something like $350 a year, which provided me the perfect opportunity to sell my book.

I didn’t get hung up on one possibility.

Rotella’s agent had originally expressed an interest in my proposal, but after months of zero communication, I was fed up. I wanted someone who cared about this book as much as I did. Or who, at the very least, wouldn’t take months to return an email.

May 2017. I attended ASJA’s annual conference in New York City. My intention was to get representation. I set up meetings with two agents and attended a morning of agent roundtables. Before I departed, I prepared a synopsis of the book that I printed out – and to which I stapled my business card. I honed my two-minute pitch, ready to release it at the sound of, “So, what’s your book about?” Agents and writers loved the book idea. I was fueled by passion, preparedness, and confidence. For the first time in my life, I was in the zone. A fellow writer and pretentious dipshit had the gall to question the book’s strengths during one of the roundtables. I powered through like a tank through a pillow fort. John Bowers, the agent, keep listening and asking questions.

About a month later, I signed with The Bent Agency.

John left, but Louise Fury swept in. Not only was she experienced in the negotiating process, but also her husband, Shawn, had written two sports books. Whatever they said to do, I did. Revise the proposal and write a sample chapter? Sure! Hold out for a better deal? Gotcha!

On Jan. 20, 2018, I landed my book deal from Atria Books, an imprint of Simon & Schuster, nearly five years from when the idea hatched – and infested my brain.

—Ithaca-based Pete Croatto is a veteran freelance writer who has written for The New York Times, The Christian Science Monitor, Publishers Weekly, Columbia Journalism Review, and many other publications. Twitter: @PeteCroatto

Add to FavoritesYou have dreamed of being a self-published author. Hooray! But finding the way forward in the massive world of self-publishing can be daunting, … END_OF_DOCUMENT_TOKEN_TO_BE_REPLACED