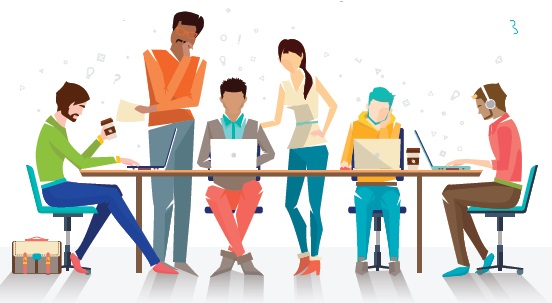 You’re getting ready to call a source crucial to a story you’re working on. First, you scan the area: The dog is contently sleeping, the neighborhood kids aren’t clustered at the end of your driveway and there’s no sign of your neighbor firing up his lawnmower. Soon you’re engaged in an informative conversation when a truck lumbers up your driveway. Your landscaper arrives, weedwacker in tow, a day early.

While working at home is more frequently a perk than a burden, it does present the occasional, unavoidable interruption. Many independent contractors have found refuge in renting shared work space – public places where you pay for office space by the day, month or longer.

“We see a lot of writers, from those freelancing on different projects, to someone writing a children’s book. It really varies,” says Devin Cole, director of business development at WorkBar, with locations in Boston and Cambridge, Massachusetts.

Gaining popularity among writers in small towns and bustling cities, these spaces range from a simple cube to a private office to a full conference room suitable for impressing clients. Some offer an open floor plan with unassigned seating, encouraging workers to move about. Many boast amenities such as lockers for overnight storage, a fitness center, a roof garden, mailing services, a kitchen or catering. 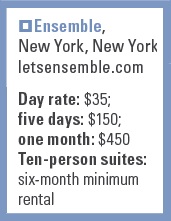 Washington, D.C.-area freelance writer Matt Mossman turned to a co-working space when his newborn presented a temporary interruption into his usual bedroom work space. After looking around in his area,  he chose a location that gave him a casual feeling over an option with a full kitchen.

“I really just wanted a good place to pull up a chair and flexible part-time hours,” he says, adding that while he was open to the potential camaraderie of a communal work area, he didn’t want to feel forced. 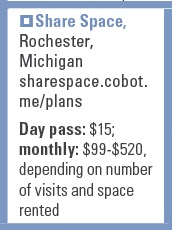 “I liked the folks I worked with, and there’s been a little bit of networking,” he says. “The owner and I took to each other, and are now friends and have networked through each other.”

While Mossman is back to working at home, he views his time in the co-working space as a positive experience. In addition to the new connections, he enjoyed being out of the house more than usual.

Enrichment opportunities are another common perk of many co-working spaces; a full calendar of professional development sessions and social events is common. Facilitators are both outside professionals and members showcasing their own skills. 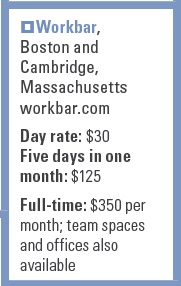 Long Island, New York, freelance writer Iyna Caruso thought a co-working space would create a useful home base during trips to Manhattan for meetings or press events. After looking around, she chose In Good Company, a space dedicated to women entrepreneurs.

“In addition to desk space, it has a full schedule of networking events and classes, and it gives members the opportunity to offer workshops and programs of their own,” she says.

Caruso used that as a chance to try out a new idea she’d been planning.

“I wanted to roll out a new creative audit service for small businesses, in which I review their marketing tactics and strategies to help improve their branding,” she explains. After announcing her services in the space’s 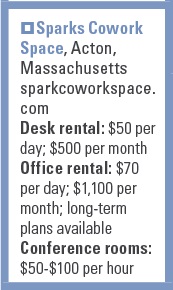 newsletter – offering a free session to the first few responders – she had some test clients.

Caruso also participated in an organized one-to-one program set up by the space, during which she introduced her services to members and heard about other members’ needs.

In addition to a quiet spot at which to work while on the road, Caruso came away from the experience with a head start on her new service: “I got great feedback – plus a couple of new clients.”

While memberships and floor plans vary, most co-working spaces are uniform in their goal to give the solo worker a place to work, plus access to a larger community.

“The underlying feel is that you’re in a room full of smart, helpful people,” says Cole, observing that workers tend to embrace the chance to talk and meet new people.

Most spaces respect the independent nature of the self-employed by offering flexible scheduling and varying membership plans. Many are pet-friendly, a bonus for work-at-home types used to catering to Fido’s daily needs.

Whether you need a quiet place to work, a change of scenery to boost your creativity or you’ve just been itching for contact with like-minded individuals, exploring co-working spaces can be a great way to revitalize your work style.

Tips to help you avoid being hacked