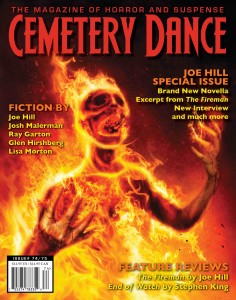 Search for Cemetery Dance on Twitter, and among the glossy photos of newly released novels from the specialty press, you’ll find authors eager to share news of publication in the related magazine. Writer Annie Neugebauer captures the thrill with this post from June 21st, 2017:

“I can finally share my latest news! My short story ‘White Paint’ will appear in @CemeteryDance Magazine! Cross one off the bucket list!”

In short, if editors accept your story for publication in one of the oldest horror-themed publications in the country, you have arrived.

In 1988, author Richard Chizmar founded Cemetery Dance Magazine to showcase horror, dark mystery, and suspense stories. Four years later, he began to publish books. The World Fantasy Award-winning magazine even bears this blessing from Stephen King on its website: “Cemetery Dance is one of the best…I read it as soon as it comes in. Great stuff!”

Potential contributors can explore the website, which includes a selection of columns and author interviews, as well as a section titled “Free Fiction.” There, you’ll find stories including Damien Angelica Walters’ “The Hands That Hold, the Lies That Bind,” which begins:

“The thorn breaks through Callie’s skin, rising from her left shoulder like a small, jagged periscope. There’s no pain, no blood, only a strange sensation creeping the length of her spine.”

“I don’t need a breaking-new-ground kind of story,” Chizmar says. “I look at character first, then mood, and then plot. Horror is an emotion. I’ve never fallen on the side of the slasher stuff. I’m more interested in character, atmosphere, and mood.”

He and other editors have published stories that could be classified as horror but also as crime and mystery. “Some of our stories could absolutely fit in Ellery Queen’s Mystery Magazine,” he says. “Horror, for me, is about examining the shadow in the corner as opposed to the sunny, cheerful stories out there.”

He and fellow editors search for stories that remain memorable for decades. One of these is “Voice C,” by the late Tom Piccirilli, in issue #42. “It’s a scary story that works on a couple of different levels,” Chizmar explains. “On one level, it’s a paranormal horror story about an investigator looking into a murder, but it also makes you think about the house that you live in and the former inhabitants. What is left over of us when we’re gone?”

“Hill’s story is about a young man who finds a camera that takes pictures that aren’t necessarily of this world. The owner of the camera, who is not a good guy, comes after him to get it back,” Chizmar says. “It’s an amazing piece, and we published its first world appearance.”

Whenever Chizmar attends a convention and finds himself sitting across the table from writers, he urges them to write the stories that are more meaningful to them. “I’m not always successful with my stories,” he says, “but I have to write the story that’s tucked into my brain, no matter how small the character or place or occurrence. All my heart is in that story. I always tell folks sitting across table to learn to embrace the process.”

Writers interested in learning more about Cemetery Dance can purchase a six-issue subscription or single back issues on the website. The open call for submissions generates thousands of stories, and competition for publication is steep.

“Very few people succeed right out of the gate,” Chizmar says. “You have to learn to embrace that and take those challenges like a badge of honor, and keep going. There are writers who’ve submitted over and over again, and there have been a couple of very happy occurrences when I got to write that acceptance letter that made their day and my own.”

“The world’s top authors in the genre are published within our pages, but Cemetery Dance is also the place to look for glimpses of the future.”

Contributing editor Melissa Hart is the author of two published memoirs and the YA novel Avenging the Owl (Sky Pony, 2016). She’s an editor/consultant for Creator & Collector Services. Web: creatorcollector.com.