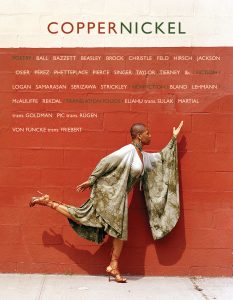 In 2002, poet Jake Adam York founded Copper Nickel at the University of Colorado Denver. He died 10 years later at age 40, and the magazine went on hiatus until poet and professor Wayne Miller relaunched it in 2014. The biannual print publication – which includes selected works on its website – features fiction and nonfiction, poetry, and writing in translation.

“Translation folios distinguish us from other magazines,” Miller says, referring to the editors’ inclusion of three to five poems by a single poet and translator. “I’m frustrated when I find a single poem by a Lebanese poet in a magazine surrounded by American poets. I don’t know how to contextualize that poet because she’s writing in a totally different literary tradition, with a different national history.”

Miller asks translators publishing in Copper Nickel to write a contextual preface in the form of historical commentary, or observations on the national literary tradition, or the difficulty of translating a particular language – “something to give our primarily American readership an access point,” he explains.

Editors particularly appreciate writing with a historical and/or sociocultural theme. Jacob Rogers translated Spanish/Galician writer Xavier Queipo’s story “Uncle Filipe” for the September 2019 issue. Rogers begins his introduction noting that the piece “is many things at once: a tragic story of a suicide, a reckoning with the harsh years of Spain’s fascist dictatorship, and a treatise on memory, both individual and collective.”

Queipo tells the story in two parts – from the point of view of an uncle who commits suicide and from his niece. “The story is about the complexity of memory,” Miller explains, “and it also functions as a metaphor for the way in which atrocities committed against Galicians under Franco have not yet been accounted for. We often talk about domestic and public narrative fiction. I love that this story does both at once.”

Past contributors include fiction writers V.V. Ganeshananthan, Maria Kuznetsova, and Farah Ali, and poets Kaveh Bassiri, Natasha Sajé, and Samantha Lê. Work in the magazine has appeared in Pushcart Prize and Best of anthologies. Many writers make their debut in Copper Nickel alongside well-published, award-winning authors and poets and translators.

Miller points to Justin Jannise’s poem “Leather Jacket” (Sept. 2019) as the type of work that captivates him. It’s a narrative piece about a jacket the speaker purchases at a vintage store and takes home to his working-class father, who’s skeptical of such a splurge until his son reveals that he’d switched the price tag for a lower price.

“The poem is really about class difference between children and parents,” Miller says. “The speaker is over-educated, and the jacket becomes an object for thinking about this difference. I love the astonishing turn that happens at the end. You expect the parents’ disapproval, but when we realize he’s basically stolen the jacket, they approve of that.”

“She uses it as a thread to think about body dysmorphia and sexual harassment; it’s a very feminist piece and interesting because she’s thinking about these topics through the lens of a male singer,” Miller says. “The piece looks at the ways in which popular culture informs and shapes and complicates our personal narrative.”

Copper Nickel editors receive thousands of submissions a year. They prefer very brief cover letters to accompany polished work. “A perfect cover states your name, what you’re submitting, a mention of three to five previous publications if you have them, and a thank you,” Miller says.

As poetry editor, he appreciates work that shows careful attention to tools such as image, line breaks, stanzas, and rhythm. “If I’m reading through a submission of two or three poems, and I can’t articulate what tools the poet’s really leaning on, I’m going to reject the work,” he says.

The magazine’s fiction editors look for first pages that interweave context and conflict, characterization and setting with the sense that the story’s been pulled out of a larger world. “A great sketch artist can make six lines on a piece of paper, and all of a sudden, a face emerges,” Miller says. “The artist knows what to include, what not to include, and how a small mark can do a lot of work. The best short fiction we receive does the same thing. A single sentence points to something much larger, but the sentence is also doing its own work.”

Nonfiction submissions, if narrative, need to function as an entry point toward a larger question as in Lehmann’s essay about Tom Petty. “We’re excited about work that uses experience but also research and associative logic and lyrical writing to deepen a question which doesn’t necessarily have to be solved,” Miller says.

Contributing editor Melissa Hart is the author of Better with Books: 500 Diverse Books to Ignite Empathy and Encourage Self-Acceptance in Tweens and Teens (Sasquatch, 2019). Twitter/Instagram: @WildMelissaHart.

“The market’s a lot bigger now than it was in the 19th century and the mid-20th century.”