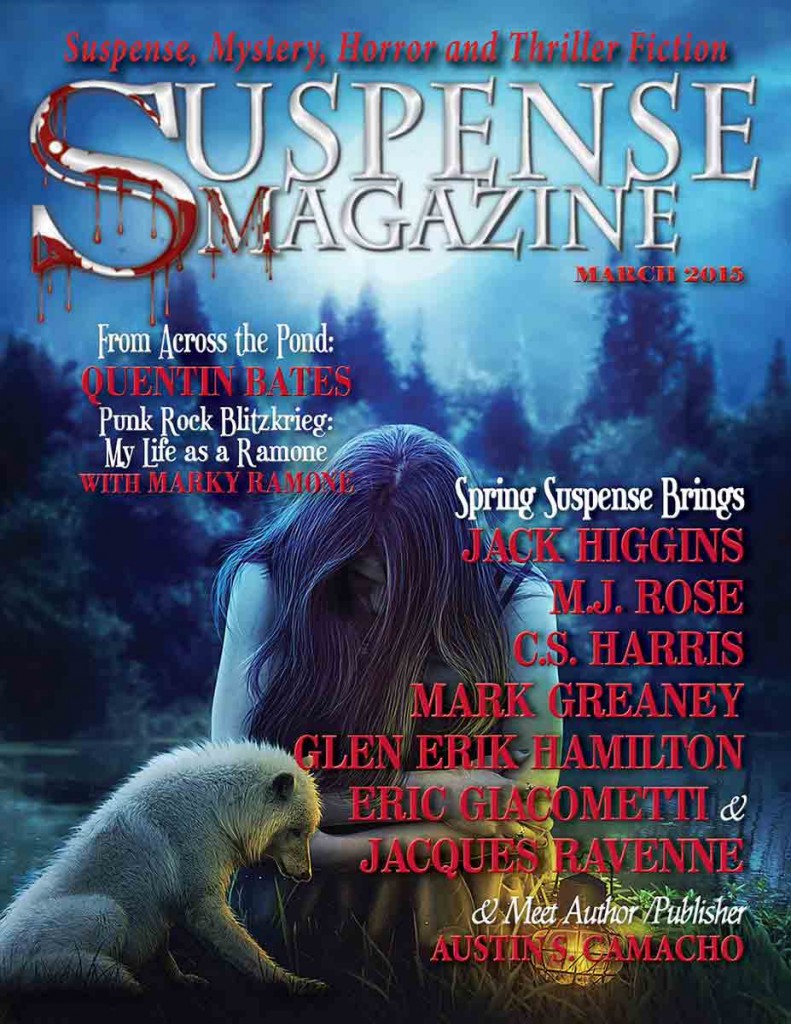 The website for Suspense drips with blood – on the logo, splashed across tab titles, pooling in the paragraphs of short fiction and nonfiction. In 2007, John and Shannon Raab launched the magazine to showcase emerging writers and share craft advice from established authors. Even each issue’s “From the Editor” column offers lessons on how to keep readers engaged. In the May 2015 issue, John writes about what writers can learn from successful movie and TV show endings, or what he calls “the next day’s conversation piece.

While Shannon works in the living room as publisher and art director, John hunkers down in his self-proclaimed man cave surrounded by cassette tapes, CDs and comic books. “It’s a labor of love,” he says of his work as Suspense editor and ebook publisher. He relates with delight that best-selling author Gigi Pandian received a two-book deal from her own publisher because Suspense named her mystery novel Artifact a “Best of 2012” debut novel. “She came up to us at ThrillerFest,” John Raab says, “and gave us a big hug.”

The Raabs publish author interviews, book reviews, nonfiction articles and fiction up to 1,500 words in the suspense, horror, thriller and mystery genres. A recent issue includes an article on how medical professionals would treat an overdose of codeine, plus an article with Marky Ramone about his new biography, Punk Rock Blitzkrieg: My Life as a Ramone, and former firefighter Patrick Kendrick’s mystery story, “John’s Lament.” Here’s a paragraph from Kendrick’s story.

I watched Woo falling asleep, complacent, and wondered where Shunna was right now. Was she already in that grave, her lovely lips parted slightly, ready to catch the earth that oozed through the openings of a cheap casket? Her pale skin would be even whiter, the flush of her skin I so admired forever halted, the blood vessels filled with formaldehyde. Her shining red hair dulled in death.

Suspense editors are fine with graphic medical and death descriptions. However, they stay away from stories involving child abuse, rape and animal cruelty. They also suggest submitting steamy romances elsewhere. “You can mention a sex scene,” John Raab says, “but we don’t publish anything graphic. We leave that to Harlequin.”

The Raabs launched their magazine to offer a publication in which all writers could have a voice “to showcase their work,” John says, “regardless of sales and stature in the community.” They’re delighted to publish work by debut authors such as Neil Griffin, a 25-year police veteran whose novel Benefit of the Doubt appeared in May.

They were equally thrilled to publish “The Hunter” by Jack Kappelhof, a story about an army corporal being hunted in the woods. “It’s detailed, with great scenery,” John says. “You wonder what the heck’s going on. It keeps you engaged the whole time.”

While John describes suspense writing as a male-dominated genre, he’s seen an increase in publications by female authors. Suspense Magazine has featured Patricia Cornwell, Janet Evanovich, Allison Brennan and Heather Graham. “Many of them wrote romance first,” he says, “and then they did some murder, and then romantic suspense.”

Lisa Gardner’s work appears often in the magazine. The February 2015 issue ran an excerpt of her novel Crash and Burn. She and fellow author M.J. Rose offer literary advice in the March 2014 issue. “Suspense writing is lean,” Gardner says, “and if you do your job correctly, there’s no need for an adverb. And there’s no need to use a verb other than said . . . the scene and dialogue should do the work for you.”

Writers interested in mystery, horror, thriller and suspense writing will find a wealth of information on the genre itself in Suspense, as well as examples of editorial style and preference. The Raabs will consider as many stories as a writer cares to submit. However, John urges potential contributors to show work to beta readers and professional editors before emailing them to him.

“Get people you don’t know to give you honest criticism,” he says. “For our Halloween issue in particular, we get things that aren’t edited. That’s our horror story.”

Writing teacher Melissa Hart is the author of the memoir Wild Within: How Rescuing Owls Inspired a Family.

Submission format: In the body of an email to [email protected] – no attachments

Download our free guide to finding a literary agent, with the contact information and submission preferences for more than 80 agencies. Originally Published October 31, 2016

Add to Favorites Advertisement First, before diving into tips and advice on helping your work stand out, I want to address the term “slush pile.” … END_OF_DOCUMENT_TOKEN_TO_BE_REPLACED