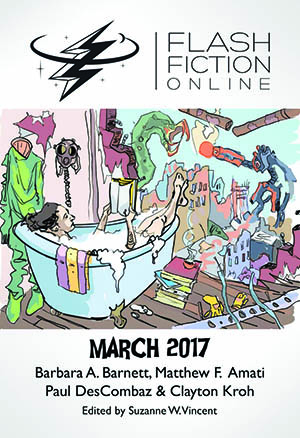 “Smooth and delicious,” she says of the pieces that delight her. “I have three top things I want to see in a story. I want it to make me feel something. I want the writing to sparkle and take my breath away. And I want to see a complete story.”

For the past decade, Vincent and publisher Anna Yeatts have been showcasing the best flash fiction they can find in an online magazine available to subscribers in e-reader format or online as individual downloadable stories for free.

Editors consider fantasy and science fiction stories, as well as mainstream and literary submissions, horror and crime pieces, and slipstream fiction, which they define as “a relatively new subgenre that ‘slips’ smoothly between speculative genres, combining, for example, horror and high fantasy, or science fiction and steampunk.”

They gravitate toward stories from writers of various races and ethnicities, religions, abilities, genders, sexual orientations, and nationalities. In July 2017, they published “Elsewhere,” by Meera Jhala, former professor of theoretical physics.

Subscribe today to The Writer magazine for tips, industry news, reviews, and more.

It begins: “Mrs. Bhatia was five when the first colony began on Mathuria. On her birthday, her father started a savings account in her name and began working nights and weekends to fund it. She was sixteen when he got lung cancer, the year before the government mandated the use of respirators outdoors.”

“It’s a sort of science fantasy story with vocabulary set in India,” Yeatts says. “It’s about an older woman trying to travel to be with her son, and she saves her money all of her life to get to space to meet him. It’s heartbreaking. I could taste it, feel this world just breathing.”

In 2015, Matthew F. Amati published “The Cratch, Thy Keeper” in Flash Fiction Online. The independent film company Fancy Rhino bought the rights to make it into a short horror film.

Aimee Picchi’s horror story “Errata to The Fugue of the Undreamable Abyss” appears in the July 2017 issue. “It’s a romance and a horror story with an element of dark speculative fiction,” Yeatts says. “I cared about the character, and the writing is stunning and evocative and lyrical. It’s not like anything I’ve ever read before.”

“Her writing is impeccable,” Vincent adds. “Every word counts. Every word is important, which not only adds to the story but adds to the artistry of the piece.”

That same issue also includes “Brujitas” by Shara Concepción, who writes, “We stand by the bird till the old witch sighs and closes her window; till the sun dips out behind the fence, tinging the sky with blood and gold; till orbs of jaundiced light undulate from streetlamps; till our grandmothers shout our names from behind their gated windows, and our stomachs coil like chains on bikes we do not have. We place our last Cheetos near the bird’s gaping beak, wipe neon-orange residue onto our jeans before we run.”

“She’s created a really interesting magic system that we don’t see every day,” Yeatts explains of “Brujitas.” “Fantasy stories are not all elves and dragons.” 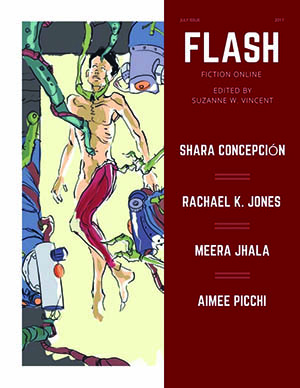 Editors at Flash Fiction Online don’t publish novel excerpts or stories with graphic sex or gratuitous violence. Yeatts looks for beautifully written pieces that make her care about the characters. “We don’t accept character sketches or slice-of-life vignettes,” she says. “We want a fully developed character arc and plotline. Think about a powerful, tiny moment that’s really going to affect readers. Then show a powerful change in a character.”

“Think about a powerful, tiny moment that’s really going to affect readers. Then show a powerful change in a character.”

“It breaks my heart when someone ends up summarizing instead of telling a story,” Vincent adds. “Simplify your plot and conflict. Simplify the number of characters and the complexity of the characters so that you’re not trying to cram a 3,000-word story into 1,000 words.”

She tells writers to keep learning and improving, whether they’re emerging or have 20 books to their name. The editors maintain a YouTube channel with short videos that define flash fiction, teach writers to avoid story clichés, and explain how to approach publishers professionally with a short piece.

“A writer who quits studying is going to stagnate very quickly,” Vincent cautions. “Visit writing websites and participate in critique groups. Too many authors isolate themselves. They’re writing in this little box, and they don’t reach out or get support from other writers. It’s very valuable.”

Contributing editor Melissa Hart is the author of Avenging the Owl (Sky Pony, 2016) and a consultant for Creator & Collector Services. Web: melissahart.com.

Want more profiles of literary journals like this one?

Audio fiction, cine poetry, and multimedia narrative are just a few of the tech innovations embraced by online journals in the modern era. Here’s how you can think beyond the printed word in 2022.

This Instagram journal is devoted to sharing “stories of the things we keep to keep our dear dead with us.”