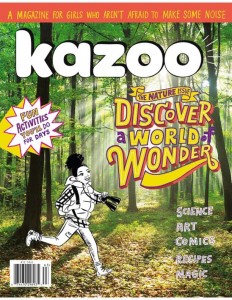 Girl scientists, inventors, comedians, magicians, artists, and writers between the ages of 5 and 10 have a new place in which to publish their creative projects. Kazoo, launched in the summer of 2016, encourages readers to post pictures of their work on the magazine’s Facebook and Instagram pages, as well as on its regular “Share” page in each issue.

“We call it ‘a magazine for girls not afraid to make some noise,’” says Editor-in-Chief Erin Bried, who has two young daughters and a 20-year history as an editor for magazines including Self and Glamour. “I thought it was important to claim space for girls. They’re so underrepresented in so many areas of our popular culture.”

The debut issue of Kazoo, funded by a Kickstarter campaign, sold out immediately. Bried added eight more pages of content to the fall 2016 issue. The entire magazine is ad-free; it’s also devoid of pictures of girls so readers aren’t tempted to compare themselves with magazine models.

“I have such high expectations for myself and my very small team,” Bried says. “We’re getting such positive response from our readers. I want to do right by each and every one.”

The tone of Kazoo is creative, witty, and empowering. Along with art projects and recipes, mazes and science experiments, readers will find stories about highly successful women. “Every story in Kazoo is developed or inspired by a top woman in her field—a chef or artist or scientist or athlete,” says Bried. “Our aim is to reinforce in girls what they already know about themselves. They can be loud, they can be strong and smart and silly and athletic and fast and anything they want to be. What we want is to find a place where girls can be completely true to themselves.”

Regular features in the quarterly magazine include short stories, comics, interviews, jokes, search-and-finds, secret codes, and drawing tutorials, such as one by graphic novelist and MacArthur Fellow Alison Bechdel titled “How to Draw a Cat” (summer 2016).

Kazoo is thematic; the theme of the fall 2016 issue is “interconnectedness.” Bried is particularly excited about a story on pinhole photography, featuring tips from renowned photographer Catherine Opie. “She gives advice on how to be a great photographer, how to think about photography and inspiration,” Bried says. “Readers get to build their own pinhole camera out of a juice box.”

The fall 2016 issue also includes illustrator Annika de Korte’s maze, which highlights the work of Jane Goodall. The maze is one of Bried’s favorite pages because it features a woman of historical importance getting to her destination.

“This maze looks at Jane and her major discoveries, and how she’s sought to make a difference from the very early age of 26 with no scientific training and just her notebook,” Bried says. “It just blows my mind how bold and brave she was.”

Other contributors include Chef Melba Wilson, physicist Whitney Ingram, and National Book Award winner Polly Horvath, who wrote a story about going to visit her grandmother in the temperate rainforest of British Columbia on a quest to find a Kermode “spirit” bear.

Bried would love to hear from top women in the field interested in contributing to Kazoo. “I’ve gotten emails from an Egyptologist, a volcanologist, an engineer at NASA,” she says. “I’m so humbled by the faith that all of these amazing women have put in me and in the magazine.”

Young readers are welcome to send in their artwork and creative writing to Kazoo as well. Bried particularly appreciates the fan mail she receives from readers, regardless of their age. One of her most treasured letters comes from a 15-year old girl who explained that she’d been bullied throughout elementary school. “She wrote to tell me how much she would have loved Kazoo as a child, how it would have helped her through those difficult years,” Bried says. “It was really moving to read.”

Contributing editor Melissa Hart is the author of the middle-grade novel Avenging the Owl (Sky Pony, 2016) and an editor/consultant at Creator & Collector Services. Web: melissahart.com.