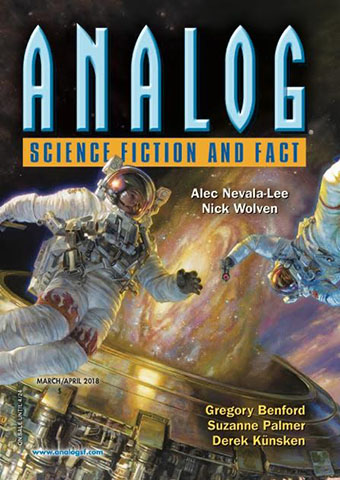 Analog Science Fiction and FactBrooklyn-based writer and cartoonist Alison Wilgus immersed herself for a year in the minute details of space exploration and crafted a short story, “A Barrow for the Living,” about three people just barely surviving on a Mars base when they receive a shipment from Earth. Editor Trevor Quachri read her story and immediately felt it was perfect for Analog Science Fiction and Fact. The protagonist is female – Wilgus believes strongly in featuring women and people who identify as lesbian, gay, bisexual, or transgender within her stories – and there’s plenty of scientific research to back up her conflict-heavy narrative about Mars colonization.

“She did the research and approached the piece with a different voice and angle,” Quachri explains. “You want to keep people on their toes, keep them interested. When I can find a story that embodies what the magazine is, with an unusual angle, that’s very valuable.”

Sign up for our weekly newsletter, full of tips, reviews, and more.

The print and digital bimonthly magazine bears little resemblance to its 1930 origin as a pulp publication with “men punching beetle aliens in the face,” Quachri explains. In the latter part of the ’30s, then-editor John Campbell focused on the science that informed science fiction, with stories that explored physics and astrophysics in the context of the space race.

These days, Quachri looks for stories that center around physical, sociological, and psychological science. “We’re a very fact-oriented magazine, and there’s almost always a scientific core in our stories,” he says. “I’d like to see more chemistry, biology, and geology in stories from diverse voices.”

He’s particularly interested in fiction that takes on trends in real-world technology that’s of relevance to readers. “For instance, I’ve had a few interesting stories – some humorous, and some darker – about the various perils of self-driving cars,” he explains.

Often, he can trace submissions as having been inspired from articles in Popular Science. Writers spin the research into fictional explorations of biotechnological breakthroughs and newly discovered planets. “Trends in science often lead to trends in science fiction,” he explains of the glut of narratives he occasionally receives on the same topic.

Quachri is particularly excited to launch Effie Seiberg’s story “Optimizing the Verified Good” (Sept./Oct. 2018), about a group of robots who transcend their programming limitations with menacing results. He’s also eager to showcase G. David Nordley’s “The Empress of Starlight” (Nov./Dec. 2018), about a crew far from Earth investigating the disappearance of stars. “It’s a great bit of hard space opera,” Quachri says, referring to the subgenre of science fiction that focuses on chivalry, melodrama, and interplanetary warfare.

Aerospace engineer Tom Jolly has published several stories in Analog. Artist and writer Frank Wu, with a Ph.D. in bacterial genetics, has published here; Quachri admires Wu’s ability to blend humor and pathos in relatable characters and his solid scientific grounding. “He takes it that extra step from a general fiction story to a specifically Analog story,” Quachri explains.

Minnesota writer Marissa Lingen has a piece in the July/Aug. 2018 issue titled “Left to Take the Lead,” about a young woman who becomes a farmworker on Earth and earns money for college tuition after a disaster in the Oort Cloud leaves her family destitute. She begins:

“The day I found out my uncle Will was still alive, I had been out spraying the crops in a full crinkly hazmat suit. The Earthers I was working for were nice people, but they always whined about the suits. To me they seemed light and airy, hardly even an annoyance compared to a vacuum suit, so I was the one who would get sent out first with the sprayer when the blight warnings came in from the provincial capital in Edmonton.”

Quachri sees perhaps a few too many submissions that start with the protagonist waking up from suspended animation, cryosleep, or death. Sometimes stories also lack the scientific research critical to the type of fiction Analog publishes.

“Sometimes, it’s a very good story, and it’s simply missing the science or the ending just doesn’t come together,” he explains. In that case, he’s sometimes willing to work with writers to perfect a final draft of the piece.

“At the end of the day, I’m looking for submissions that include all the things you could want from a traditional short story,” he says. “With the added challenge of making the science accurate and relevant.”