Chestnut Review takes its name from the stumps of the chestnut trees decimated by blight in North America – stumps that continue to send up baby tree shoots. “Sustaining a creative practice requires that level of tenacity,” editors note on the 3-year-old magazine’s website. They urge writers to submit their best work and to keep submitting until they find the perfect publication for their poetry and prose.

Dedicated to supporting writers, the editors at Chestnut Review respond to submissions within 30 days, and they pay for the pieces they publish. They also promote their contributors’ work on various online channels and host quarterly open mic readings to coincide with the publication of each digital issue.

Managing editor Maria S. Picone and her staff aren’t interested in pieces that express hatred for a particular demographic, and they’re leery of stories in which a writer centers a story around white people with minority characters or locations as an exotic backdrop. “We receive a lot of stories and essays like that and even poems. It can get a little bit tiring,” she says.

The editors aren’t interested in stories about protagonists observing someone in a situation where they might be a victim. “We receive a lot of stories about encountering homeless people or mental patients in facilities or people in nursing homes – people who can’t tell their own stories,” Picone explains. “Not only is this bad representation, because it often reduces these characters to some sort of literary trope, but it doesn’t give that character the opportunity to be a person either on the page or in their story.”

She’s much more devoted to publishing smart, pop culture-forward pieces such as Chelsea Stickle’s “AITA for falling apart at a dinner party,” a spoof on the popular Reddit community titled “Am I the Asshole?” in which users offer up a specific personal anecdote and then ask if they’ve behaved inappropriately. “So many readers called it a fresh breath of humor, a piece that takes everyday life tropes and makes them literary and super relatable,” Picone says.

She calls the piece, informed by pandemic worries about forgetting how to socialize properly, both humorous and apt. “Stickle uses the Reddit tropes to really talk about our social media era and how FOMO [fear of missing out] has become so pervasive among people that we always have to pretend that everything in our lives is super great,” Picone says.

“I’m hungry for stories that take these conventions that we’re all really familiar with from fantasy, sci-fi, magical realism, etc., and turn them on their head in some way with really good writing.”

She and the other editors look for stories that break genre conventions; they have a special fondness for literary genre fiction. She points to Joshua Beggs’ story “Off Planet” as an example of the tone and content she enjoys.

“It’s a story about an alien abduction, but it’s actually about a woman who has dementia, and she has misinterpreted the situation as being abducted, probed, and tested by aliens,” Picone explains. “I’m hungry for stories that take these conventions that we’re all really familiar with from fantasy, sci-fi, magical realism, etc., and turn them on their head in some way with really good writing.” 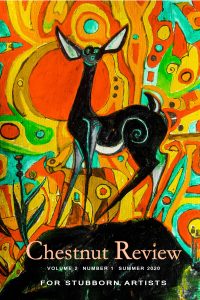 Cathy Ulrich’s short story “The Empty Above” appears in issue two, volume two of Chestnut Review. In it, the protagonist reflects on the death of her sister. It begins:

They tell you that your sister has died, and you are lying in the bottom half of the bunkbed and looking up at the empty space above you and thinking I know, I know, I know.

Your sister was born twelve minutes before you were. She has always existed in this world before you. You feel the minutes stretching out between you, the hours, the days. You feel yourself growing older, older, older than she ever will.

“There’s so much in this short flash that, really, people are still talking about,” Picone says. “It’s resonated with a lot of people in various ways because of a connection to sisterhood or motherhood or grief or family legacy. It’s a powerful existential piece. You can feel how everything expands from this situation, and repetition of words combined with the actions on the page are just so gorgeous.”

She also points to Kolbe Riney’s prose poem “Particles” as the type of work she likes to publish. “It’s a poem about physicality and about skin, which is the largest organ on the human body, but it’s so often kind of neglected because it’s just our surface,” she explains. “I love the way that the writer takes this idea of skin particles and really delves into this concept in a really beautiful way.”

She also appreciates Luke Wortley’s prose poem titled “The Early Days.” “It’s about life and fatherhood and a little bit about politics and consumption, all encapsulated in these poetic musings around the idea of milk, which was just a really fantastic, really wonderful way to kind of talk about them,” Picone says.

Picone reminds potential contributors that Chestnut Review’s tagline is “a literary home for stubborn artists and writers.” Part of being stubborn, she points out, is submitting again and again to the editors you most want to work with.

New York writer and attorney Joy Guo submitted several pieces to Chestnut Review before editors accepted her short story “Cicada Month” (3:3). She writes about Brood X, the cicadas that emerge every 17 years, in a piece about family cycles of addiction.

“It uses this idea of cycles to tell a relatable story about the things that addicts do when they’re desperate for a fix,” Picone explains. “It’s realistic, and it captures a moment that’s super important for the protagonist, who’s going through so much. This piece is gorgeous.”

Chestnut Review at a glance

“We are drawn to beautiful language, resonant images, and we crave narrative.”