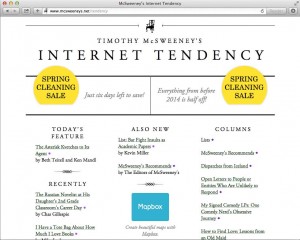 Walking to campus after the Disneyland measles outbreak last winter, Oregon State University instructor George Estreich thought of how funny it would be to ask if Cinderella were current on her shots. At home later, he wrote a piece that became “Immunization Status of Magic Kingdom Celebrities,” published in McSweeney’s Internet Tendency in February.

Internet Tendency, the literature website affiliated with McSweeney’s Publishing in San Francisco, features short conceptual humor on topics both relevant and just plain weird. A selection of recent titles gives a sense of content and tone. “Amazing Trivia about Every U.S. President Almost Too Unbelievable to Be True.”  “Reasons You Were Not Promoted that Are Totally Unrelated to Gender.”  “What a Straight Man’s Favorite Musical Says about Him.”

“Given that we’re on the web,” says editor Christopher Monks, “we want to draw you in quickly with a funny title and an easy-to-latch-onto concept, and a thousand words later, we’re done.”

Estreich crafted his piece on immunization and Disney characters like a list, including descriptions of Snow White, the Little Mermaid, Goofy, Sleeping Beauty and Cinderella. “Cinderella was not vaccinated,” he writes. “Though her stepmother feared the loss of valuable services to avoidable disease, Cinderella never left the house, so her risk was considered low. (‘Herd immunity? We’re your herd. Get back to work.’)”

Monks has a litmus test by which he evaluates submissions: “Everything you see up on the site has made me laugh.” He looks for a mixture of lowbrow and highbrow humor, with references to pop culture and current events. One of Tendency’s most popular pieces is a first-person essay about decorative gourds juxtaposed with a barrage of bawdy language.

“It made me laugh instantly,” Monks says. “I’m sort of a sucker for smart, well-placed curse words.”

Writer and actor Mara Wilson wrote “What a Straight Man’s Favorite Musical Says about Him,” a list which resonated with core followers of Tendency.

“It was really funny and smart and sharp,” Monks says. “The straight man thing is clever because of the cliché that only gay guys like musicals. The whole idea of ‘what blank says about you’ is something people respond to right away.”

Karen Linton’s “How Not to Get a Work Visa” appealed to him for its quick and witty narrative about falling in love. While Tendency doesn’t publish short fiction per se, “Work Visa” tells a hyperbolic tale from the point of view of an American woman in France who is accidentally accused of prostitution. It’s loosely about the pursuit of romantic love; Monks ran it just before Valentine’s Day.

“So when the date started – I mean, ‘meeting,’” Linton writes, “I took all his winking to mean something other than flirting. I mean, winking in France could mean pass the croissant for all I know, like honking in Norway apparently means hello.”

Monks urges potential contributors to keep pieces short – about 1,000 words – and to send them in the body of an email. Tendency’s submission guidelines page also reads like short conceptual humor. Under “PAYMENT,” you’ll find, “There will likely be none. If there is any, it may come very late or in unusual currency.”

Writers don’t get rich writing for Tendency; however, they often find their work reprinted on other literary websites. Estreich’s Disney characters vaccination piece ended up on Bustle.com and inspired more than 800 “likes” on Facebook.

Estreich visits Tendency weekly to read pieces such as “Excerpts from
My Rejected Script: Alien vs. Predator Save Christmas.”  “I like it because it’s razor sharp,” he says, “but funny without being nasty. It tends to be more absurdist, and its targets (media stereotypes, pretentious people) seem to generally deserve it.”

Melissa Hart is the author of the memoir Wild Within: How Rescuing Owls Inspired a Family. She teaches at the School of Journalism and Communication, University of Oregon.