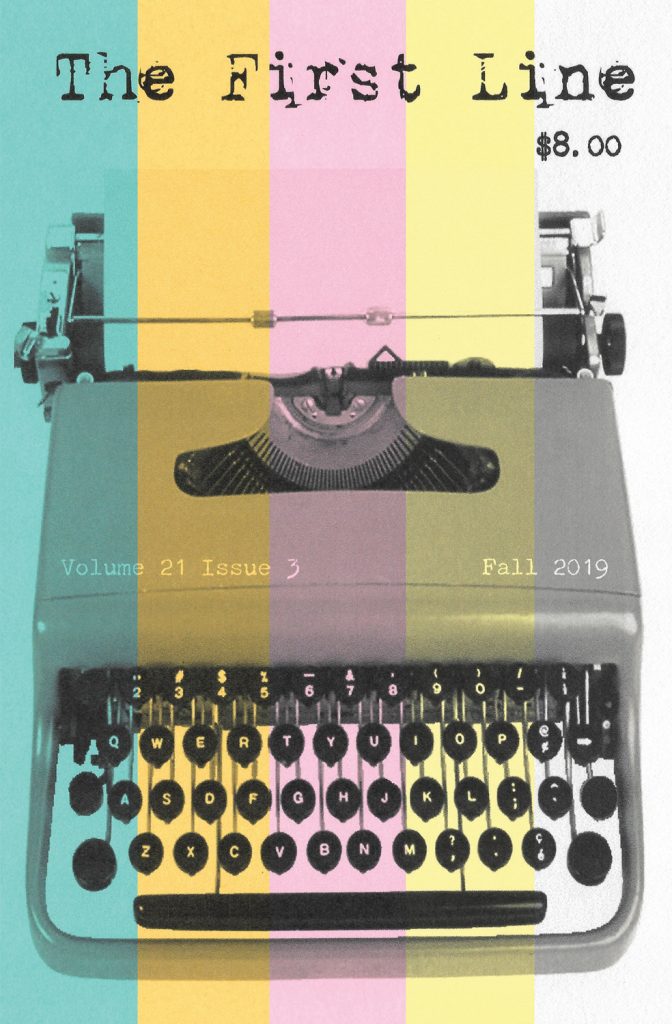 The door was locked.

The Simmons public library was a melting pot of the haves and have-nots, a mixture of homeless people and the wealthy older residents of the nearby neighborhood.

Loud music filled the room, making it hard to hear anything else.

All prose and poetry submissions to The First Line in 2020 must begin with one of these three sentences. David LaBounty is founder and editor of this 20-year-old international literary quarterly with his wife, Robin, who coordinates manuscripts. They’re fascinated by how a mandatory first line showcases the variety of stories that emerge from a single common sentence, and how the restriction inspires creativity when writers sit down to a blank page.

“I suffer from writer’s block,” he admits. “I have three projects of my own sitting on my desk staring at me, ugly. I’m not motivated enough to finish them. If writers have a book or two sitting around and they can’t get back into them, often they’ll stumble across us and write something that will get them back into their own words.”

In addition to stories and poems, The First Line includes short nonfiction essays by writers reflecting on their favorite first lines in published literature.

LaBounty notes that after two decades, he sees few submissions on topics that strike him as “new.” That’s not a problem. “Someone may have written about a topic 20 years ago, but new writers can write about similar topics because they bring truth and power to an experience that will resonate with readers today,” he explains. “There can still be truth in a story about someone with Alzheimer’s even if, as an editor, you’ve read that story 1,000 times. That story may impact someone else who’s never read a story about someone with Alzheimer’s.”

He recalls an editor he knew who refused to read submissions involving zombies. “I thought, well, there are a lot of zombie stories out there, but that doesn’t mean that you’re not going to get a zombie story that absolutely knocks your socks off. As an editor, you have to be open to everything.”

He tells potential contributors to write what they want to read, not what they think he wants to read. “But be wary of writing about anger or disappointment with current events,” he cautions. “People try and write out their feelings in a story, which is fine, but because an event has happened so recently, you don’t always have the perspective to write about it. Some people can do art from pain that’s current, but it’s better to wait a little bit.”

“I got lost in the first page and forgot I was an editor,” LaBounty says, and points to two other stories in particular that continue to “enchant and delight.” One is Ryan Molen’s “Problem Solving Exercises,” published in Fall 2016, which begins:

Mrs. Morrison was too busy to die. On an average week in the office, Stephanie Morrison interacted with 39.4 people. These interactions were broken down into 11 meetings, 51 calls, and 62 emails. (The average is given without counting absences; she had none for the past 11 years).

The other is Gabrielle Friesen’s “Crocodiles in Wake” from the Spring 2015 issue. It begins:

Fairy tales hardly ever come true for quiet girls. Chime was a quiet girl. She hadn’t spoken in close to two years, not since the move. In the absence of mountains, words had become meaningless. The marsh and its buzzing, chirring, slurring miasma made her silent.

Advice for potential contributors to The First Line

It may seem minor, LaBounty says, but he urges writers who’ve had their stories workshopped with a “track changes” feature online to accept all changes and delete all comments before they submit them to editors.

Writers may not alter the first line in any way, nor may they submit stories with the quarterly’s first lines to other journals or post them online on public sites until after the print journal has been published.

Contributors are invited to write and submit as a package a four-part story using spring, summer, fall, and winter sentences posted on the journal’s website. “They have to arrive in February,” La Bounty says. “We rarely publish all four, but sometimes we’ll publish one or two of the four if they’re not completely tied together and can stand alone.”

Six years ago, LaBounty and his wife started The Last Line, which comes out once a year. “As you would expect, all the stories have to end up with the same last line,” he says. “It is just as difficult as it sounds.”

The First Line at a glance 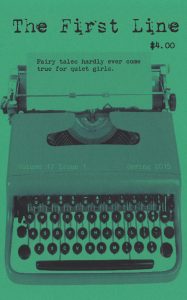 “An exercise in creativity for writers and a chance for readers to see how many different directions we can take when we start from the same place.”

—Contributing editor Melissa Hart is the author of Better with Books: 500 Diverse Books to Ignite Empathy and Encourage Self-Acceptance in Tweens and Teens (Sasquatch, 2019). Twitter/Instagram: @WildMelissaHart