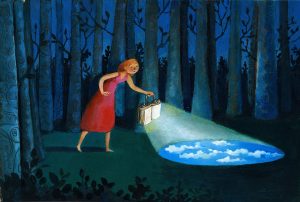 The salamander, in ancient Greek and Roman mythology, can live in fire. When Jennifer Barber decided to start a literary magazine in 1992, she found the animal’s rumored resilience appealing. “I thought it was a good metaphor for what writers do, how they deal with their difficult experiences and transform them into art,” she says.

Barber and her staff look for highly accomplished work from writers who might not yet be household names but who deserve a wider audience. From the first issue, they’ve had a strong commitment to publishing female writers.

“When I started the journal such a long time ago, there weren’t very many literary journals with women editors,” Barber says. “And I wanted to make sure we had a great representation of women writers.” 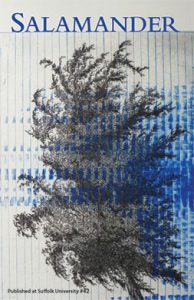 Salamander’s guidelines indicate editorial interest in literary works with the power to transform. “Transformative,” Barber explains, “in the sense that you read a piece and feel changed by it, and it stays in your mind.”

She points to a story in the June issue of Salamander as an example. Titled “My Father’s Teeth,” it’s Marsha Pomerantz’s memoir piece exploring the intersection between her father’s life as an immigrant and her own life. Pomerantz begins:

“My father saved his teeth by lying through them. Somewhere on the border between Russia and Poland, pines and rifles, in the nineteen-teens, he went off to the woods with two other boys to visit the village horses hidden there from soldiers, who would commandeer anything from anybody, but especially from Jews.”

“It’s a personal history, but it has a larger historical background of leaving the old country and starting a new life, having to acquire a language,” Barber says. “It made me think a lot about father-daughter relationships – the ways they succeed, the ways they fail. It uses the teeth as a metaphor for a lot of different things.”

Past contributors to Salamander include Afaa Michael Weaver, Yiyun Li, Naira Kuzmich, Sonya Larson, Carys Davies, Siobhan Fallon, Chase Twichell, and Maura Stanton. James Winter has a short story called “The Watchers” in the June issue. It follows the life of a teenager in Ahmedabad, India, surviving with his girlfriend in a slum shanty, without money for food. The main character is haunted by the thought that men are going in search of vulnerable people and stealing their organs for science.

“The story is beautifully done,” Barber says, “because you can never tell if this is a reasonable fear based on reality or based on rumors that he’s heard. It’s a very intense piece.”

The same issue contains a short story by Mary Crawford. Titled “Vibiana in the Half-Court Set,” it’s about a girl and her best friend – eighth graders on a Los Angeles-area high school basketball team in 1987. “Much more than that, it’s about the families of the two girls,” Barber says. “The main character is the daughter of Irish immigrants. Her best friend is the daughter of an African-American father and a Korean mother. It’s a really wonderful piece on a lot of levels, with an awful lot going on in it that makes you stop and think.”

She notes that when we talk as a society about identity, we often discuss a particular ethnicity or race as if each category were entirely separate. She appreciates the intersectionality that informs Crawford’s story. “If your mother’s Korean and your father’s African American, your identity is going to be complex,” she says, “and your best friend trying to understand your identity will have a more layered appreciation of it.”

Barber believes memoir, in particular, presents structural challenges because authors are drawing directly on their own experiences. “It’s difficult to know where to start and where to end, and what kind of structure you’re going to apply to the piece,” she explains. “Successful memoir is very highly shaped and structured. It needs to have all of the artistic qualities of a poem, say, or a short story. Everything that’s there is completely necessary to the overall design.”

She suggests that writers show their work to trusted friends or writing colleagues and solicit feedback before they submit. “Each work has its own timeline, and it can be very hard for the writer to judge when a piece is finished,” she says. “Usually, it’s helpful to let a little time go on between when you think a piece is finished and when you send it.”