When author and editor Stephen Parrish moved to Germany from the U.S., he found it challenging to participate in the greater literary community. He decided to join in digitally, co-founding the online literary magazine The Lascaux Review.

“The Lascaux cave paintings, although not writing per se, are the oldest extant samples of human communication. Artists told stories 15,000 years ago using iron oxide pigments and even signed their work with hand stencils,” he explains. “We carry on the storytelling tradition today and illustrate the journal generously with classical works of art.” 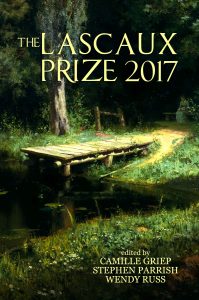 Editors at Lascaux seek what they describe as accessible literature. “I think everybody knows what accessible means, but there’s a lot of disagreement about what literature is,” Parrish explains. “We’re looking for writing that venerates the language and speaks to the human condition. We want a good story, and we want it to be told very well. If it’s funny, great. If it’s sad, great. We just want it to move us emotionally.”

He and his fellow editors appreciate submissions that show style, skill, and story-promise in the first 100 words. He points to Jordana Jacobs’ flash fiction piece “Jacob,” which begins: “Whether or not my husband was killed in the Holocaust is disputable on a technicality. He was not yet, and never would be, born.”

“That kind of beginning grabs you right away,” Parrish says. “You want to keep reading and find out what the hell is going on.”

Past contributors include Philip Appleman, Hélène Cardona, Joseph Fasano, Lee Martin, Maggie Smith, and Robley Wilson. Alexander Weinsten’s science fiction piece “Rocket Night” particularly resonated with readers. Written in the style of Shirley Jackson’s story “The Lottery,” it’s about a society that chooses a child and puts him in a rocket ship and shoots him off into space. “The premise is funny,” Parrish says, “but it’s deadly serious as well as poignant.”

He cites two other pieces as representative of the work he and other Lascaux editors like to publish. The first is Neil McCarthy’s poem “This Isn’t Silver Lake Anymore,” which ends:

In a different life I would run away with you,
into the tattoo-blue of early evening, cover our tracks
and burn every single one of those maps.

“That last stanza leaves me breathless, especially as I’m not quite sure what the poet is trying to say,” he explains. “With creative nonfiction, you want to understand what the piece is about. With fiction, you want to be able to discern the theme. But with a poem, I just want to come away with a feeling.”

Parrish also admires Tony Hoagland’s poem “Give Me Your Wife,” which begins:

because
I like her. I like
the signs of wear on her;
the way her breasts have dropped a little with the years;
the weathered evidence of joy around her eyes.

“On the surface, it’s literally one man asking another man to give him his wife if he’s done with her,” Parrish says. “On a deeper level, it’s a compliment to women who perhaps have a few years on them. It’s one of my all-time favorite poems.”

Parrish has long been conducting a subtle experiment to determine whether potential contributors to Lascaux Review have read the website’s submission guidelines. He estimates that one in 15 writers takes the time to familiarize themselves with what he and other Review editors are looking for. “For instance, we ask for poetry to be formatted conventionally – no ‘sculpture’ poetry with words around the page to shape something,” he explains. “However, we receive experimental poetry like this every day. Read submission guidelines.”

The Review runs a series of contests over each year with cash prizes. “Some have told me a Lascaux acceptance or award has altered their careers,” Parrish notes. “A couple of them were ready to give up. One contest winner told me her piece, one we paid $1,000 to publish, had been rejected 45 times. I tell them to keep writing, keep submitting, and remain true to themselves. Someone out there – maybe me – will hear them and get it.”

He urges writers to remember that even when they begin to publish regularly, they need to keep learning. “There’s a tendency to stop developing as a writer,” he says. “There’s that old saying, ‘If it ain’t broke, don’t fix it.’ But when you’re in the business of creating, it’s always broke, and it always needs to be fixed. I don’t care if they just handed you a Pulitzer Prize. Your dialogue, your description can always improve. There’s always a next level to reach for.”

Contributing editor Melissa Hart is the author of Better with Books: 500 Diverse Books to Ignite Empathy and Encourage Self-Acceptance in Tweens and Teens (Sasquatch, 2019).Twitter/Instagram @WildMelissaHart.