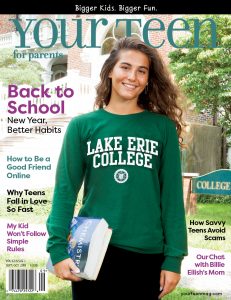 “The Sweet Valley High Books Made Middle School Easier for Me.”

“My Daughter’s a New Driver and I’m Learning How to Let Go.”

“Bonding with My Kids at AnimeCon.”

These are all titles of essays you’ll find at Your Teen for Parents, a print and online magazine for parents of middle and high school students. Managing editor Sharon Holbrook looks for optimistic, inclusive pieces that engage readers with excellent reporting, as well as compelling personal essays about parenting or about the experience of being a pre-teen or teen from adolescent writers themselves.

Essays for Your Teen should offer insight into a particular topic, along with a sense of what authors have learned from the experiences they’re relating. “We accept essays that are a bit more lyrical, employing the use of metaphors, as well as essays that are a bit lighter and simply observational,” Holbrook says.

The magazine also includes various sections devoted to reported pieces that incorporate information from experts. Two sections ask a parent and teen to write side by side about a topic with an expert who weighs in on what other parents might do when faced with a similar situation.

“This might be a lighthearted discussion about how to get out of the house in the morning,” Holbrook says. The discussion may also be much more serious, as in the online piece “My Teen’s Bipolar Disorder Problems Nearly Destroyed Our Family” which pairs an essay from an author who developed bipolar disorder as a teen with an essay from her mother telling readers what it was like trying to help her daughter through that time.

One Your Teen department, titled “Snapshot,” is a vignette or story written by a parent, about life parenting teenagers. “It can be light, poignant, or serious, from any number of different angles,” Holbrook says. It can also be written by teens themselves.

In the September/October 2019 issue, 17-year-old Lilly Dickman wrote an essay titled “What a Time to Be Alive,” about her experience of growing up in the midst of gun violence in schools, compared to the relative calm of her parents’ and grandparents’ adolescence. It begins:

“The fire alarm went off during my psychology class on the fourth
floor. I saw the flash of terror on Mrs. S.’s face – she masked it in
seconds, but I caught it, and my heart dropped into my stomach.
My peers went suddenly rigid, nobody standing to line up at the
door, all eyes on Mrs. S. in hopes of direction.”

“The essay demonstrates what it feels like to be a teen in high school,” Holbrook says of Dickman’s piece. “It’s really remarkable. I was proud to include it.”

Writer and parent advocate Hannah Grieco’s essay “A Path Between Us Paved in Stories” appeared in the July/August 2019 issue. It’s about how Grieco bonded with her autistic son by writing short stories that feature protagonists like him. She writes:

“Despite my growth as a listener and mother, I yearn for a connection
with him through fiction. I want to share what I love, too. I don’t need a
highway. Just a path – a small, one-lane country road that allows for
thoughtful, quiet travel in both directions. So I write a tiny story. One
page, which stretches to two as I fall in love with the characters.”

“It’s a beautiful expression of that connection that parents search for with their children – a connection which becomes more challenging when there are major differences between parent and child,” Holbrook says.

Your Teen ran Auden Schendler’s essay “My Daughter Has No Friends at School. What to Do When a Teen Just Doesn’t Fit In,” about feeling hurt because his eighth-grade daughter had a difficult time finding friendship and connecting with her peers. “The piece resonated with our readers,” Holbrook says. “They read it and shared it with comments like ‘I understand what that dad is going through.’ We do like a personal touch in our essays,” she adds.

In the December issue, she’ll publish Jacqueline Miller’s “It’s Just a Hot Chocolate,” about how the writer’s teenage son taught her a lesson when he reached out to a man who was homeless. “It’s about how as adults we get into ruts and sometimes forget simple things like human kindness. Our kids, who get a bad rap sometimes, can teach us so much. The essay is perfect for the holidays – warm-hearted and sweet.”

Holbrook asks potential contributors to study the articles and essays in Your Teen online and in print. “Any prospective writer can always email me and request a couple of recent PDFs of the magazine,” she says. Readers will note that many pieces begin with an anecdote, and many readers use humor even as they craft poignant essays and articles on difficult topics.

Once you get a sense of the magazine’s style, pitch your most polished essays rooted in personal experience. “Instead of sending us a pitch for reported work or personal essays, we often get hybrid or opinion pieces,” Holbrook says. “We don’t want opinion pieces. We want stories about what happened to you and how you worked through it.”

Contributing editor Melissa Hart is the author of Better with Books: 500 Diverse Books to Ignite Empathy and Encourage Self-Acceptance in Tweens and Teens (Sasquatch, 2019). Twitter/Instagram @WildMelissaHart

Add to FavoritesYou have dreamed of being a self-published author. Hooray! But finding the way forward in the massive world of self-publishing can be daunting, … END_OF_DOCUMENT_TOKEN_TO_BE_REPLACED