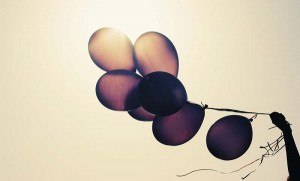 Hundreds of book lovers crowd a concert hall in Eugene, Oregon. Some grin over the top of two-foot stuffed lion and tiger toys clutched in their arms, prizes for being among the first 50 people to arrive on this chilly October evening. Onstage, three authors in pajamas and slippers read from their novels and short fiction, pausing periodically to launch a plastic hand or lighted beach ball into the audience. This is Bedtime Stories for Grown-Ups with Portland authors Chuck Palahniuk, Lidia Yuknavitch and Chelsea Cain – a literary event that rebels against the traditional bookstore reading.

“Bedtime Stories for Grown-Ups was the brainchild of Chuck,” Yuknavitch explains. “He wanted to reinvent the magical childhood feeling of stories before bedtime, but also torque it for adults by making material edgy enough that it would explode polite podium reading. We stage events to support each other’s new books, but we also stage them to bring sexy and fun back to literary readings. Like micro rock concerts. Because books rock.”

More and more, authors are learning from the disappointment of performing to a bookstore audience of one that they’ve got to step up their game and offer a creative and informative event that bears little resemblance to the old-school model of merely reading from one’s new book behind a podium. Ultimately, this is great news for authors who have risen to the challenge of attracting audiences to their events by offering slide shows and cooking demonstrations or eschewing the bookstore altogether in favor of community hikes and panel discussions at the local watering hole.

Teri Coyne, author of The Last Bridge, believes that the biggest mistake authors make when setting up events is to focus on selling books. “Think instead,” she advises, “about what would be fun for readers to experience.”

To that end, she gathered a group of women authors to present an evening of reading and discussion at KGB Bar on a January evening in New York City. The promotional poster shows the silhouette of a caped woman standing atop a mountain, along with the tagline: Ordinary Women: Extraordinary Heroines – A new paradigm for the modern heroine.

“One of my intentions in pulling this evening together,” she explains, “was to make hearing writing exciting.”

A video recording of the event shows a crowd of people listening intently to each author, beer bottles close at hand.  “We got a really good turnout,” Coyne says. “We made the event interactive; people in the audience started asking questions and having conversations, and people who came to see one author on the panel ended up buying other authors’ books, as well.” 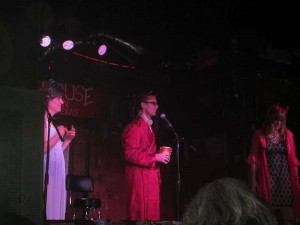 Another New Yorker, Ava Chin (aka The Urban Forager), wanted readers to experience her food memoir Eating Wildly: Foraging for Life, Love, and the Perfect Meal on a visceral level. She asked people to wear comfortable shoes and led them on a walk that focused on late spring/early summer edibles in the Fort Greene neighborhood of Brooklyn. They brought small plastic bags for collection of items such as wineberries and concluded their journey at Greenlight Bookstore.

Since then, Chin has led several walks in conjunction with readings at independent bookstores. “At my readings where I can’t do a foraging tour,” she says, “I read a tiny section from the book, then engage the audience with a ‘virtual foraging’ slideshow presentation of seasonal wild edibles. The events have been fully attended with lots of discussion afterwards.”

Dana Kaye, owner of a boutique PR company that specializes in publishing and entertainment, believes only a small fraction of the reading population wants to sit in a bookstore and listen to people read. “Instead,” she says, “they want to attend an event.” She and her team look at the novels they’re publicizing with an eye for innovative ways to reach the audience outside of the bookstore.

One example is novelist Laura Caldwell. The author of The Dog, she is holding her book launch party at a day care facility for dogs.

“My dog, Shafer, a mini goldendoodle, inspired the book,” Caldwell explains, “so we knew the launch needed to be not just pup-friendly but all out canine fun. The venue, Dog-A-Holics, is a dog boutique and day care in Chicago. Along with beverages and books, treats and a bakery will be waiting for guests who bring their own furry friends.”

Connect with a hot news topic.

Dogs offer evergreen appeal.  But what if your topic is more time-sensitive?  Walter G. Meyer’s novel Rounding Third appeared on shelves just before the bullying crisis became a major topic of conversation. A passionate anti-bullying advocate, he created a slideshow and lecture with concrete advice on how to handle bullying. He sells most of his books when he is speaking at colleges, libraries and community centers. “Tie your book into a hot topic that’s already in the news,” he suggests. “And if you want people to attend your event, have something of value to offer in addition to the book itself.”

When prepping the tour to promote my memoir Wild Within: How Rescuing Owls Inspired a Family, I kept Meyer’s suggestions in mind. Issues surrounding adoption and environmental conservation (both themes in my book) appear frequently in the news. Some of my events include a comic lecture and slide show. Some include other environmental writers, and some include adoptive families and social workers. Still others include birds of prey from local wildlife rehabilitation centers to illustrate a lively educational presentation.

Read with a friend. 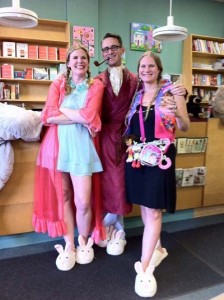 Author event coordinator Laura White at the University of Oregon Duck Store used to regard with skepticism authors who read together; they seemed worried about being able to attract an audience as the sole focus. “I’m over that now,” she laughs. “There’s something really cool about two authors reading together. They’re both so invested; I love it when they interact with one another.”

She recalls a particularly successful event earlier this year featuring Northwest authors Willy Vlautin and Peter Brown Hoffmeister. “Peter read, and then told this awesome story about the first time he met Willy, and they went back and forth reading different parts of their book. The Q and A was really interesting. They’re both such great storytellers. It was like sitting around at a party and listening to people talking back and forth.”

Kerry Dunn, author of Joe Peace, found himself reading not with other authors, but alongside a local burlesque queen. “As an avid reader,” he says, “I can imagine no greater experience than seeing one of my favorite writers share their words to an enthusiastic crowd in a bookstore…Also, as an avid reader, hitting the bookstore to hear a writer like me (i.e. unknown) means, well, what’s on the television? Maybe I’ll catch that author next time.”

When his publicist got him a reading at an Austin Barnes & Noble, he envisioned empty chairs. Not so, thanks to clever publicity. The burlesque queen read passages with him in a space decorated with police tape and handcuffs and “other subliminal items that meant this cat writes some serious noir.” The manager had to find extra chairs for the crowd.

Pause and have fun.

An author event at a bookstore can still attract a crowd and result in increased readership, publicity and sales, but authors must be prepared to do preliminary legwork. White loves it when writers contact her with a specific event idea in mind and send out press releases themselves. She suggests, too, that writers get in touch with local organizations that might be interested in the topic of their book and let them know about an upcoming event. 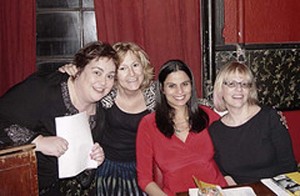 Plenty of authors who visit her store still read behind a podium. She finds that the most successful of them are performers, skilled in choosing excerpts that inspire people to buy the book. “Bill Sullivan is really good at knowing what to read,” she says of William L. Sullivan, a Eugene-based writer who’s been wildly successful at self-publishing. “He reads from a new novel and ends at a suspenseful point. You want to know what’s going to happen.”

She suggests that authors include a short break during a reading. “It’s nice,” she says, “to stop a little way in to see if people have questions. If they don’t, it’s good to be prepared with a couple yourself. You can start, ‘A lot of people want to know,’ and go from there.”

She cites as an example best-selling author Jonathan Evison, who read last spring from The Revised Fundamentals of Caregiving at the Duck Store, surrounded by tables laden with appetizers, wine and microbrews and presided over by mannequins wearing shirts that read simply, “Beer.”

He read a comic chapter of his book, paused to allow the audience to refill glasses and plates, read a little more, then stopped to lead a discussion that ranged from treatment of physically disabled people to how he works on three books at once.

“Fun” is a word White uses often to describe particularly successful author events like the one featuring Evison and Bedtime Stories for Grown-Ups. “We had a lot of enthusiastic people for that one,” she says of the latter. “One young man told me it was the best night of his life.”

Another man – a longtime English professor – showed equal delight. “Think of all the literary events he has gone to in his lifetime,” White says.  “Most of them are pretty similar. Having something a little different for people made it exciting.”

Melissa Hart is the author of Wild Within: How Rescuing Owls Inspired a Family.