Novelist Jenna Blum is no stranger to ambitious marketing plans. For her first book, she visited more than 800 book clubs in the Boston area alone. To promote her second novel, The Stormchasers, she undertook a driving tour of every Midwestern city with a bookstore, chasing storms and posting on social media along the way.

She’s now in the throes of publicity for her latest project, Grand Central: Original Stories of Postwar Love and Reunion. But this time she has help.

The book is a collaborative effort by 10 novelists, each of whom contributed a story set at Grand Central Station just after World War II. Together, the coauthors are dividing and conquering the publicity beast.

The campaign began with a one-of-a-kind book launch, held earlier this month at Posman Books, an independent bookstore located in the heart of Grand Central. Seven of the authors flew in from around the country and channeled their fictional characters with 1940s-inspired outfits and hairdos.

“This differed from any singular promotion in that we were cheering for each other, for a collective force bigger than ourselves,” coauthor Sarah McCoy says. “Thus we were free of any of the writer insecurities that often plague an author asked to stand before a crowd and champion her work. We had a sister squad.”

The promotion process continues to be as collaborative as the book, with each author taking charge in her area of expertise. Blum built and launched the book’s Facebook page, where the coauthors share news and photos about the launch, tour and individual writers. The women also promote the book on their personal social media accounts and author websites. On Twitter, the women take advantage of the hashtags #WW (Writer Wednesday) and #FF (Follow Friday) to suggest books and connect with Twitter followers. 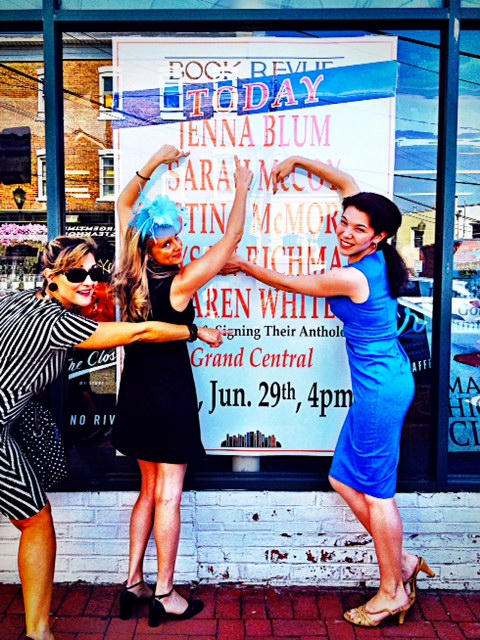 The coauthors also promote the book through scheduled Google Hangouts, which allows the authors to video chat with readers around the world. Others have used blogrolls, generating conversation by linking readers to the other authors’ websites. The writers also build their fan base through book giveaways on social media. To enter, readers often have to “like” and share posts on their personal pages, spreading the word about the publication.

“I am spoiled for life,” says coauthor Erika Robuck. “Having the expertise and ideas of so many successful, talented, giving authors at all times in this process—especially during promotion—has taught me so much.”

Ready to tackle your own book publicity? Remember this advice from five of the Grand Central authors:

1. It is never too early to plan promotion. Never. —Erika Robuck

2. Become happily reconciled to the fact that you will do a lot of the promotion yourself. However committed your publicists are, nobody’s going to love your book as much as you do. Transpose that love into promotional energy. —Jenna Blum

3. Be open to everything. Change it up. Something that may have worked for your last book may not work for your next. Likewise, a promotional tool that you shied away from before may be your best asset now. Never let fear or anxiety hold you back from trying something new. You never know what doors it may open or what wondrous new readers you may be introduced to. —Sarah McCoy

4. Immerse yourself in this grand community of writers. For many years, I just kind of lurked on the edges. Only now with Grand Central can I see how important it is, especially in this challenging publishing climate, for writers to support one another. Reach out and meet other authors and read and support their work. —Pam Jenoff

5. Always dress well. Smile and even if you feel cripplingly shy talking to readers, try not to show it. —Amanda Hodgkinson

6. You don’t have to do everything. Figure out what you enjoy doing to promote your book—but you must do something. You should at the very least have an author website, and ideally you should be active on at least one social media channel as well. And be consistent in your promotion activities: if you’re on Twitter every day, tweet every day. If you write a blog once a month, write your blog once a month. —Jenna Blum

7. Dare to dream BIG. Early in the process, [coauthor] Kristina McMorris said, “Wouldn’t it be wonderful if we could all meet in New York, and have dinner at the Oyster Bar, and get our hair done in 1940s ‘dos, and wear clothing of the period, and have our launch party at Posman Books in Grand Central?” That dream became a reality. —Erika Robuck