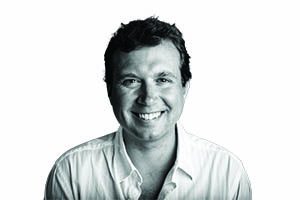 It was a Dan Quayle joke that did it.

Weekly Humorist Editor Marty Dundics recalls the editorial cartoon that he drew in fifth grade. In it, two men speculate the reason an angry mob has gathered. As a black limo drives by, one says, “Oh, Dan Quayle must be back in town.”

“I was in fifth grade, and the teachers didn’t think political cartoons were appropriate for an elementary school newsletter,” says Dundics.

Before our interview, he’d stumbled upon the drawing in his parents’ Maryland basement.

“I’ve always been kind of a smart ass,” he says. “I would be a smart ass verbally, but I found being a smart ass in cartoons was fun. It was fun to be in print. I really got a thrill out of that.”

After graduating high school, where he was the art director of the newspaper, he attended Syracuse University to study illustration and worked part-time as the morning show host at the student-owned and -operated radio station, WJPZ-FM.

Despite not having a specific plan, he’d always had a dream: to work at Late Show with David Letterman. As a kid, he had marked the Ed Sullivan Theater on a map of Manhattan that hung on his bedroom door. At night, he covertly stayed up late to watch Letterman, who, along with Steve Martin and Bill Murray, shaped Dundics’ sense of humor.

After college, he moved to New York City and settled in a Park Slope apartment in 2002. He’d only been in New York for two months when he “completely fell into” a job at Late Show. While he shuffled his large black art portfolios between magazine offices in Midtown, a woman outside the Ed Sullivan Theater offered him tickets for that night’s Letterman show.

Dundics declined but later shared the incident with a friend who, unbeknownst to him, worked for the show. Shortly thereafter, his friend left for another job and got Dundics an interview to become her replacement. Over the next three and a half years at Late Show, Dundics met many of his contemporary comedy colleagues, including a woman who worked at National Lampoon.

That connection led Dundics to freelance work as an illustrator there, and he went on on to become creative director and editor-in-chief until National Lampoon was sold in mid-2017.

After the sale, Dundics, who’d been running NationalLampoon.com solo for two and a half years, launched the Weekly Humorist in August 2017, setting up headquarters in a WeWork office on Wall Street. The office space shared with fellow creatives and entrepreneurs has created an encouraging community, especially helpful for Dundics since Weekly Humorist’s managing editor, writer and cartoonist Kit Lively, lives halfway across the country. Lively works from Texas and contributed to National Lampoon regularly for Dundics.

After NL folded, their friendship turned into a new business relationship when Dundics asked Lively to come on board with the Weekly Humorist, which is a venture of Humorist Media, a development company co-founded by Dundics and former Comedy Central executive Lou Wallach.

The relationships that Dundics has made through the years have been instrumental in the early success of Weekly Humorist. Award-winning cartoonist and writer Bob Eckstein submitted work to Dundics at National Lampoon and now contributes to Weekly Humorist.

“He is extremely generous and very respectful of me,” says Eckstein. “I think it’s an excellent working relationship.”

Lively, who hasn’t met Dundics offline, is betting on that relationship, too.

“I’m really excited and hopeful about the possibilities from Humorist Media,” Lively says. “I think we’ve got some really good ideas that we’re already working on that could make good programs.”

Dundics charted those ideas for possible revenue streams on the dry erase walls in his WeWork office.

“Over the last few months, all of them have happened. They aren’t making the money that I would want, but all of them are firing a little bit,” he says. “It’s all of the stuff that I wanted to do at National Lampoon but didn’t get to.”

At Humorist Media, he hopes to create television pitches to sell to Netflix or Comedy Central.

“I want to be a good content creator,” Dundics says.

He doesn’t see the small staff size as a hindrance.

“If I’m making all the decisions, things can move fast. I can implement something and launch it tomorrow,” he says. “And I’ve got nothing but time right now. I have to make it work, so that’s what I’m doing.”