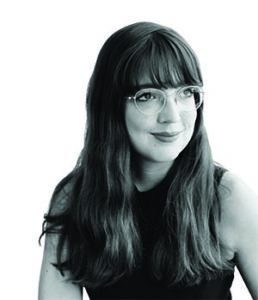 When New Yorker humor editor Emma Allen was around 6 years old, her goldfish got the ich, or white spot disease.

Allen recalls that her mother, then a corporate lawyer, left a multimillion-dollar merger meeting to deal with a distraught little girl with a dead fish.

At home, her mom placed the fish in a box and tried to explain death.

“My immediate response was ‘Can we eat it?’” Allen says.

Now, the only pet Allen has is CiCi, a horse she says has a “similarly rude personality” to her own and lives at her mom’s and stepdad’s Long Island home. Riding CiCi – but “not very well” – is one of the things you might find Allen doing when she’s not in her office sorting through potential humor pieces for The New Yorker’s online humor column “Daily Shouts” or choosing cartoons for the print mag or online feature “The Daily Cartoon.”

The 29-year-old Manhattan native has been working for The New Yorker since spring 2017, succeeding longtime cartoon editor Bob Mankoff when he left the magazine.

“I had been growing in this humor editing role [of ‘Daily Shouts’], which had been evolving and expanding under me, and then [New Yorker editor] David [Remnick] offered me the job that … was this even bigger pan-humor role with hopes that I would expand what cartoons in the mag were and what comics in the mag and online were,” Allen says.

You might think that Allen had been laser-focused on a 10-year plan to be an editor at major mag by the time she was 30. You would be wrong.

“I wanted to be a lobster fisherman,” Allen says of her high school career aspirations. “I read this early novel by Elizabeth Gilbert [about lobster fishermen], and it just seemed like this really fun, adventurous, outdoorsy life.”

One of her high school teachers thwarted the plan when he asked if she’d ever touched a lobster.

“I read a lot of fantasy books that took place in a sort of mangled medieval-ish world, so I somehow conflated in my mind that studying medieval history was like studying magic and dragons, which, of course, it’s not,” she says. “It’s like studying feudalism and the plague, which is much more boring.”

She might not be seeking out new comedic voices for The New Yorker today if her parents hadn’t let her find her own.

“They both encouraged me to follow my interests and didn’t put a huge amount of pressure on me to have a plan, which, luckily in my case, worked out,” she says. Even though they liked their jobs, they didn’t push her to follow their paths into law or finance.

“They [also] saw how bad at math I was, so they knew that was a lost cause,” she says.

After graduating from an all-girls private school in New York City that she had attended since kindergarten, Allen went to Yale…‘cause, well, Gilmore Girls.

She pursued a major in English but also took a number of art classes. By graduation time, she realized that she had enough classes to do a double major in studio art.

“Thank god I ended up with a career where much funnier people could make me laugh and draw much better than I did,” she says.

Today, Allen spends some of her free time reading memoirs and graphic novels.

“It benefits me to have a much more comprehensive knowledge of the stuff that’s out there and who’s making what work,” Allen says. “But it’s been super fun. I’ve read some stuff in that genre before, but now that’s all I want to do.”

Sometimes it seems like the work never stops: “[It’s] a never-ending task to advocate for the writers and contributors that you care about,” she says, “and to make sure that you’re finding the most interesting new voices.”

As our conversation comes to an end, I note having a coveted editorial job at a revered magazine is something many people chase for decades.

“Nowhere to go but down?” she interjects, catching me off guard.

“I feel like I am incredibly lucky to be in the position that I’m in, despite also having worked very hard for it,” she continues. “But it’s not like I’ve arrived and get to recline and just survey my kingdom. I now have to really put in the work and prove that I’m the best person for this job.”