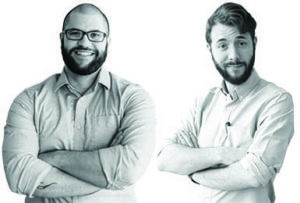 Born two months apart in 1988 in Painsville, Ohio, Steve DiMatteo and Bronson Arcuri wouldn’t meet until middle school, when they would begin a friendship that would take them from filming sketch comedy in the front yard to sparring with McDonald’s on Twitter decades later.

Arcuri and DiMatteo grew up in blue-collar homes. DiMatteo’s dad worked his way up company ranks at a beer distributor, and Arcuri’s dad worked at a factory named Lincoln Electric. Both had stay-at-home moms. Around the eighth grade, Bronson and Arcuri formed No Dice Films with another friend. Both say their families were supportive of their creative endeavors.

“As long as I was enjoying what I was doing, they were happy with it,” DiMatteo says, even though he believes their on-location shoots were “no doubt embarrassing for them.”

Like other editors I interviewed, Arcuri says there was “never a time when we were like, ‘we’re going to do comedy professionally.’” Arcuri started Ohio University as an aviation major (a mistake, he quickly offers), and DiMatteo began in sports management. By graduation time, they’d found their way to majoring in video production and creative writing, respectively. DiMatteo now works as the director of an internet marketing company. Arcuri is a videographer for NPR.

In 2014, their friendship birthed more than their knack for finishing each other’s sentences. They started Robot Butt, a comedy website that would be an outlet for other types of comedy writing they were doing.

“What I do like about our site is that everything is always a mishmash, so that at any given time you could come to the site and read just completely three or four different things,” DiMatteo says.

The site is designed with two sections that are meant to help readers separate the serious (but maybe funny) content from the completely fake.

“I put enough faith into people reading on the site to just know, ‘oh, this is a fake news story’ or ‘this is just a funny commentary,’” DiMatteo says.

One example of Robot Butt’s unique commentary is the October 2017 post “Okay, Willy Wonka Might Not Have Eaten Them, But He Definitely Killed Those Kids” by Linton Lewis, who published it under the pseudonym David Morgan.

The angle of whether Wonka ate the kids is “inherently funny,” DiMatteo says and made it worthy of posting.

But the argument Lewis makes – that Wonka had nefariously pre-picked the ticket winners and had never intended for them to return home nor stay alive – raises points sound and intriguing enough to warrant an immediate search for the film on streaming video.

“Even when we write things that have a serious tone, we try to put jokes in there of some kind, whether it’s, like, a dig at someone or something [or] subject we’re writing about,” DiMatteo says.

“Between Bronson and I, there’s like five or six other guys, where I’m not exaggerating, like every single day, we’re pitching jokes to each other,” DiMatteo says. “We’re working out ideas. We’re trying to develop new things to write about or maybe new avenues to get into.”

Because of that effort, Robot Butt soon met its goal to post new content every day, Arcuri says.

“Now people are submitting things to us, and every day that we get a submission, it blows my mind,” Arcuri says.

People are not only submitting, they’re also searching for Robot Butt, albeit incidentally. Each month, they run “How You Found Robot Butt,” a series that highlights the search terms that led people to the site.

“You’d be shocked how many people have typed in a different way of saying ‘how do I sell my soul to the devil,’” DiMatteo says. (So far he’s tracked at least 50 variations of the query.)

“It’s a legitimate concern that there are this many people trying to sell their soul,” he says. “I hope I’m putting across how gravely concerned I am.”

Now for a concern we need to address. It’s the Robot Butt in the room.

“[The name] is a topic of much debate,” says DiMatteo, who pitched it in a brainstorming session. “We laughed about it [and] one day [were] like, ‘that’s really funny. We should do that.’”

A graphic designer friend drew a logo that they thought was “good and hilarious,” and they ran with it.

“I do remember calling to register the domain and the guy on the phone laughing at the domain,” Arcuri says. “I felt pretty good about that.”

“We never thought a few years ahead, like, ‘would that hurt us at any point, having a site called Robot Butt? Would that hurt us trying to get a legitimate interview?’” DiMatteo says. “Luckily, the answer to that is no.”

In 2015, Robot Butt broke the story that Chris Rock was hosting the 2016 Oscars. They got the tip from one of DiMatteo’s friends who worked at the Academy of Motion Picture Arts and Sciences and gave permission to publish it.

“I tweeted it at the editor of Variety – and god bless this man – he said that we were the first site to report it, and then it just blew up from there,” DiMatteo says.

“And so we had a really fun month of people who write for the LA Times and Hollywood Reporter saying, ‘What is Robot Butt and why did they break the story and not us?’”

“The fact that these prestigious publications had to put Robot Butt in their copy was the best prank that we ever played,” Bronson says.

Another unexpected blitz of publicity happened when Robot Butt found itself trading barbs with the McDonald’s Twitter account. The exchange began over a satirical post titled “McDonald’s Won’t Deny McRib Is Made of People.”

“[They] were responding but like with meat puns,” DiMatteo says. “Rather than ignoring us, they were literally making it sound like ‘wink-wink, maybe it is.’”

When they’re not beefing with hamburger joints (pun intended), DiMatteo and Arcuri are trying to grow their “labor of love” into a real, live, self-sustaining piece of virtual real estate.

To get there, they’re focusing on the positive.

“I don’t have any negative things people have said about Robot Butt, and if they did, they can come find me and we’ll fight,” DiMatteo says. “That’s a promise.”

—Keysha Whitaker’s work has appeared in The Writer, the New York Times, and The New Yorker. She has an MFA from The New School.