Edith Pearlman has won three O. Henry Prizes, the PEN/Malamud Award and, announced last week, is long-listed for the National Book Awards in fiction. But as the following article from our archives shows, few in the 2011 mainstream even knew her name. 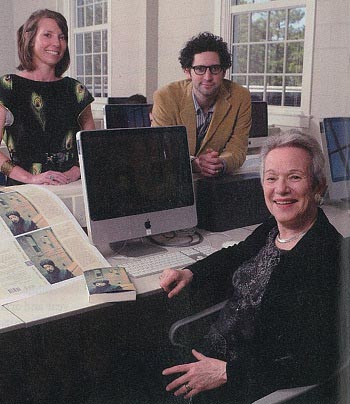 “Maybe from now on everyone will know of Edith Pearlman.” So ends Roxana Robinson’s review of Pearlman’s short-story collection Binocular Vision  in The New York Times Book Review. In her cover critique, Robinson expressed her amazement at not knowing Pearlman’s work. Similarly, the Los Angeles Times’ book critic relished telling his readers about the collection by an author he previously knew nothing about.

Before Binocular Vision, Pearlman’s stories had been awarded three O. Henry Prizes and been published three times in the Best American Short Stories series, twice in The Pushcart Prize and once in New Stories From the South. In her introduction to The Best American Short Stories 2006, novelist Ann Patchett, the well-known author of Bel Canto, placed Pearlman’s work alongside the greats of American literature. In addition to all this, Pearlman’s three previous story collections had all won awards: How to Fall (Mary McCarthy Prize in Short Fiction), Love Among the Greats (Spokane Prize for Short Fiction) and Vaquita (Drue Heinz Literature Prize).

Just a few months after Binocular Vision came out, Pearlman’s work received one of the highest forms of literary recognition: a PEN/Malamud award, honoring “excellence in the art of the short story.” Previous recipients of the award include John Updike, Eudora Welty, Lorrie Moore, Alice Munro and Joyce Carol Oates, thus securing Pearlman’s work in the canon of great American short stories and writers.

Prior to Binocular Vision, Pearlman’s writing had given her a feeling of success, some recognition and a small, devoted following – but not a large publishing contract.

“I’ve been writing for 40 years, and I’ve been lucky that I’ve been published a great deal in small magazines, literary magazines,” Pearlman says. “I haven’t been published in newsstand magazines. My agent had sent my books around and they weren’t taken by New York publishers. The next best were the small presses, and I was lucky with them.”

So how did her big splash with Binocular Vision come about? Even more curiously, how did it emerge as the debut publication of a small literary press? To be exact, how did this happen with Lookout Books, an imprint of the Department of Creative Writing at the University of North Carolina Wilmington?

No matter where you look in this story, you find a passion. Pearlman embodies passion for the craft of writing. The late Stanley Colbert, a publishing legend and former head of HarperCollins Canada, nurtured his passion and brainchild into the department’s Publishing Laboratory, which she started forming in 2000. And Ben George, editor of the school’s national literary magazine, Ecotone, and a former editor at Tin House, and Emily Louise Smith, the laboratory’s director and co-founder/executive director of Lookout Books, are passionate about literature.

When Smith was hired as interim director in 2007, the lab had “already been functioning as a small teaching press, with students actively involved in the process,” she says. While it had regional appeal, the laboratory wanted to grow its audience and publish literary books with national appeal.

Lookout Books, says George, its editorial director, aims to harness the energy of Ecotone and “champion” the magazine’s authors, in a manner similar to Tin House and McSweeney’s – which are both magazines as well as publishers – and to (an older model) publisher Ecco and Antaeus, the literary magazine.

As Smith tells it, instead of offering open submissions, Lookout Books would solicit writers who had an ongoing relationship with Ecotone and publish their body of work. Because of Lookout Books’ small scale, there is little money to spare and, Smith says, the imprint, magazine and laboratory are “running on heart.”

Although Pearlman had published more than 200 short stories, she had rarely reached as wide of an audience as she has with Binocular Vision. Praise of her writing and her publication record brought her to George’s attention.

“Ben seemed to have read everything I had written,” Pearlman says.

George asked Pearlman if her already-published stories could be changed, or if they were chipped in stone. Pearlman, who believes a story isn’t ever done, allowed more editing, and the two of them went to work to make each story sparkle.

“Tactful, imaginative and enormously helpful” are words Pearlman uses to describe George as an editor. “He did a Maxwell Perkins on me. He didn’t rest – we didn’t rest – until every story was as good as it could be.”

Lookout Books sought reviewers for the collection, compiling more than 300 names from suggestions of the university’s creative-writing department. Then it asked if a reviewer would like a galley and was careful about where the galleys went. There has been no major reading tour for Pearlman, although Smith applied for a grant to fund a book tour.

“We were incredibly lucky,” Smith says about receiving the New York Times and Los Angeles Times reviews. “It just blossomed from there.” Social media took off, with bloggers weighing in and people posting on Facebook, and the story of an “unknown” writer landing two major reviews became its own narrative.

Prior to the newspaper reviews, Smith admits, she had difficulty getting the attention of bookstores or others she approached.

Targeting small literary presses, such as Lookout Books, that will carefully and closely honor a writer’s work is a path some writers may want to explore more thoroughly. It works especially well if you know that your work is strong but might not be a good fit with a large publishing house. Steve Almond’s story collection God Bless America, which Lookout Press will release next month, is another example.

Almond has a “cult following” – his polite way of saying “not very large,” he admits. Because of that, he says, “It simply doesn’t make sense to ask a big New York corporation to ‘invest’ in a book of my short stories. It’s just not a ‘product’ that’s likely to make much money, and thus not likely to be super important to them, as compared with, say, a memoir by Charlie Sheen.”

Almond has self-published as well as been published by big presses, such as Algonquin Books and, in 2007 and 2010, by Random House. But he sought a small press for these stories. “More and more story collections are migrating to small, indie presses, where the staff is more dedicated to the art, and the sales expectations are more realistic,” Almond says. “I’m not slagging big presses, or suggesting that they don’t care about the collections they put out. I’m simply saying that they’ve got a lot of books to worry about. Whereas a place such as Lookout has only a few they do every year. The level of attention they give their authors is astonishing.”

While a writer may get a modest advance from a small press, money is not necessarily at the forefront of a small press’ thinking.

It is Lookout Books’ mission statement that drives its decisions, Smith says. It reads: “Lookout pledges to seek out emerging and historically underrepresented voices, as well as works by established writers overlooked by commercial houses. In a publishing landscape increasingly indifferent to literary innovation, Lookout offers a haven for books that matter.”

Smith encourages writers to submit to Ecotone as a way of introducing Lookout Books to their writing. Although Pearlman’s work has put Lookout Books on the map, the press still plans to continue publishing only a couple of titles per year.

“Working with small presses, like Lookout Books, is a terrific experience because of the attention the writer gets and the certain amount of input the writer has,” Pearlman says.

She has heard anecdotes from writer friends about the lack of attention or control they have received at large publishers, with, for example, the editor leaving in the middle of the process, or a situation in which the company loses interest somewhere along the way and stops pushing a title through the distributor.

Pearlman admits that Lookout Books is unique; she felt as if she was a collaborator and partner in the process. She encourages writers to get their stories published first in literary journals, allowing their work to be edited, before seeking publication of a story collection.

What’s next for Pearlman, now that many more readers have heard about her? Is there a downside to her success with Binocular Vision?

“I now have too little time to write,” Pearlman says, but then adds quickly, “but that is not a complaint.”

She plans to publish stories until she has enough for a new collection and then, she says, she plans to submit it to Lookout Books.

Elizabeth King Humphrey is a writer and editor, with an MFA from the University of North Carolina Wilmington. She is the co-author of Know It All: The Little Book of Essential Knowledge.

This article was originally published in the September 2011 issue of The Writer.