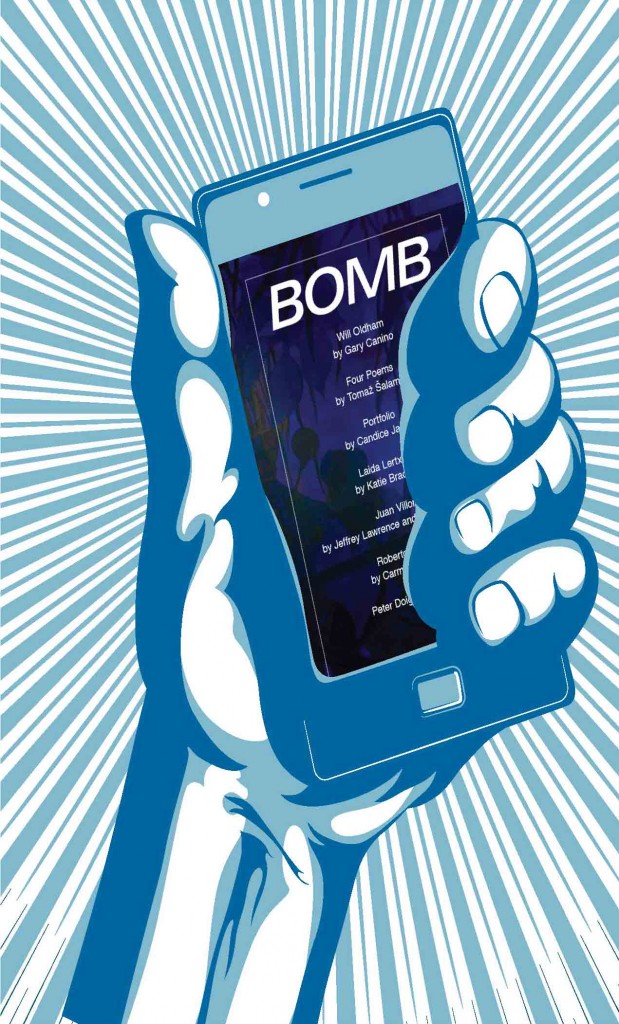 We’ve heard this proclamation from so many detractors in the past decade, but the reality is not so one-dimensional.

A group of forward-thinking, risk-taking entrepreneurs has grabbed the steering wheel of the industry and is changing the course of publishing. Thanks to them, publishing has so far weathered the technology revolution, taking the challenges thrown at it and turning them into opportunities for innovation.

These 21st-century publishing pioneers had to decide what it means to be a publisher today. Is it embracing mobile platforms? Finding ways to reach readers? Meeting authors’ evolving needs? For writers, the new publishing landscape can be scary, but it also opens up a variety of new possibilities.

For Evan Ratliff, CEO and co-founder of The Atavist, whose writing has appeared in The New Yorker, Wired and National Geographic, the decline of traditionally published magazines meant a dearth of places to publish the kind of long-form narrative nonfiction he was so fond of writing and reading. With programmer Jefferson Rabb and editor Nicholas Thompson, he created a space where 5,000- to 30,000-word stories could thrive. Since 2011, the trio’s brainchild, digital magazine The Atavist, has published multimedia stories with a clean, attractive design each month. Each piece can be accessed with a one-time payment or by subscription. Creatavist, the software behind The Atavist’s stories, makes up the other half of the Brooklyn-based business, with media outlets as wide-ranging as The Weather Channel, The Paris Review and NPR using the unique digital platform to tell stories.

Although video, photos, audio and other digital elements often play significant roles in the presentation of The Atavist’s stories, Ratliff emphasizes that good prose still forms the backbone of their work.

“We don’t think of our stories as like ‘multimedia extravaganzas,’” he says. “We think of them as great stories, and we have all these design tools we can use – including video, including audio – to move the story along.”

Across the bridge in Manhattan, another alternative publishing venture, 29th Street Publishing, is also trying to figure out how best to present content to readers. 29th Street creates mobile apps for magazines both fledgling and established that allow readers to experience quality magazine content via their tablets and mobile phones.

“Replica is pretty much a failed idea,” says David Jacobs, CEO and founder of 29th Street who worked on one of the first blogging software platforms before starting his own company. “That’s why 3 to 4 percent of subscriptions are digital, compared to other media – movies, TV, music – where the majority of revenue is digital.”

They accomplish this beautifully, with titles including Scratch, a quarterly magazine for writers about the practical and financial aspects of the profession; One Story, a literary magazine that comes out every three weeks with a single short story; and The Classical, a sports magazine that describes itself as “a monthly conversation about sports.” The company even designed the new Harper’s Magazine app, which launched in late 2013.

Established publications are starting to look at different ways to complement their print editions with an app, says Jacobs. The bimonthly U.K.-based film magazine Little White Lies, which features illustrations, lengthy interviews with actors and in-depth articles about film culture in their print edition, created a weekly, available through a 29th Street app, that covers what’s showing at the movies that weekend. This alternative to a replica app lets the magazine offer different content to digital readers and publish more frequently than the print schedule allows.

“It’s on a tighter news cycle so if some news drops the day after print goes to bed, they can still address it that week, instead of a whole month and a half until the print comes out again,” says Jacobs.

And yet for The Atavist and 29th Street and every other publishing startup, the question remains: How do you get people to pay for quality content?

“You don’t necessarily know what drives people to buy,” says Ratliff. “People claim they do, but they don’t. There will always be stories that we think will do really well that don’t and then there will be stories that we think, well, that’s not going to sell anything, and then it goes crazy. Trying to manufacture that is a very difficult aspect of what we’re doing.”

Part of the challenge, according to Jacobs, is that after the age of blogging and advertising-based business models, consumers have to be retrained to fork over the cash.

“For 15 years, writers have been giving it up for free, and now it’s coming out that that’s not going to work anymore,” he says. “Things have to go under for people to realize ads didn’t get it done, for readers to realize that that thing you were getting for free, the writer on the other side wasn’t getting a fair shake.”

Ratliff and his fellow Atavist founders recognized that writers were the first to suffer when publications started to struggle, and they made it a pillar of their business plan to adequately compensate their writers.

“One of our stated principles from the beginning was we are never going to be one of those places that said, we’ll pay writers better when we find our feet and make money,” he says. “That’s like every digital publication ever.”

The Atavist pays its writers based partially on a royalties scale, however, so the writer is just as much at the mercy of the unpredictable reader as the publisher. But if they pen a hit, then they reap the reward as well.

29th Street originally allowed content creators to build their app for free and then took a cut of any revenue generated, but Jacobs and his team found that once the app was built, some clients never held up their end of the bargain to produce content. Now there’s an upfront cost so the content creator has some skin in the game from the start. Then for each user, 29th Street charges a small fee.

Jacobs see opportunities for writers in the way the publishing industry is changing. He predicts that the era of the general interest magazine like Vanity Fair or The New Yorker with millions of subscribers has ended.

“There may never be another magazine of that size,” he says.

Instead, he envisions a market of medium-sized publications with well-defined audiences and areas of expertise with around 10,000 to 30,000 subscribers.

“I think that is a healthier ecosystem,” he says, “a more resilient ecosystem for writers.”

“It used to be that if you were graduating from a liberal arts college and you wanted to be a staff writer at a magazine and you worked really hard, you could probably get that,” he continues. “It was out there. Now, it’s not out there.”

What writers have to do now, he suggests, instead of finding a publisher or a 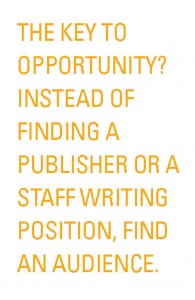 staff writing position is to find an audience. Many writers have done this through a blog, others through digital publications such as those created by 29th Street. For writers producing book-length content, self-publishing increasingly paves that road to a readership.

Self-publishing has had its issues, however. Early generation self-published works looked unprofessional. Readers saw them as traditional publishers’ sloppy seconds. These days, in part thanks to a collection of startups that seeks to improve the quality of these alternative publications, readers and authors are taking a second look at self-publishing.

Miral Sattar’s company BiblioCrunch is one of those startups helping writers make their self-publishing venture as successful as it can be.

Originally, Sattar, an engineer who started her career in publishing at Time in the mid-2000s, launched BiblioCrunch as a software platform that allowed authors to write their books in the cloud and then convert them to the various types of files needed to publish to each different e-reader. Frequently authors would contact her and say, “What I really need is a cover designer,” or, “Do you know someone who can help me convert my PDFs?” Sattar took this as a sign that what authors really needed was a marketplace of services. BiblioCrunch pivoted from its original vision to become such a place, allowing freelance editors and designers to connect with authors looking for their talents. Sattar and her team vet each freelancer who applies, so authors can be sure they hire a professional. VIP subscribers have access to additional resources, including marketing tools, expert advice and budget plans, and freelancers who subscribe can waive most of the 13 percent transaction fee they would otherwise owe BiblioCrunch for each project they land.

With the increasing quality of self-published books, authors now sometimes choose the independent route simply because they want more freedom over their content than a traditional publisher would allow. Bestsellers including Still Alice and The Celestine Prophecy and, of course, Fifty Shades of Grey have proved that self-published no longer means unrecognized.

“Historically, self-published books were not well-edited because there just wasn’t access,” says Sattar. “They had the homegrown covers where you could kind of tell it had a self-published feel, but now everyone has access to the resources to publish a quality book.”

Sattar, who wrote and self-published New York City’s Crowdsourced Dessert Guide in 2012, has seen the change in perception of self-publishing first hand.

“Now, people are like, ‘Oh cool, you wrote a book. That’s awesome,’” says Sattar. “Where before it was, ‘Oh, you’re self-publishing? Is it because you couldn’t get a publishing deal?’”

So while the doomsday headline may sell more newspapers – or perhaps we should say, get more page views – the publishing industry’s professed demise has proved to be more of a rebirth. Good prose still has a home, whether on one of 29th Street’s mobile magazine apps, in an Atavist feature or in the pages of a traditionally published or self-published book, and readers who appreciate such content are still out there, waiting to be found. All of which is great news for writers.

Megan Kaplon is a contributing editor at The Writer.

Add to Favorites Advertisement First, before diving into tips and advice on helping your work stand out, I want to address the term “slush pile.” … END_OF_DOCUMENT_TOKEN_TO_BE_REPLACED