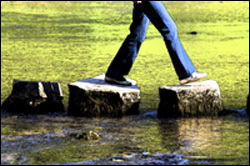 Most writers know me for running the online resource Funds for Writers, which provides information about grants, fellowships, contests, awards and the like, and for writing my newsletters and blog posts. But, like many nonfiction writers, I have a closet passion to pen fiction. Mysteries rock my world.

Funds for Writers newsletters reach 42,000 readers, and among the leading topics are contest sponsors. My organization has become known for its calls for submissions, and each week I receive thanks from writers who succeeded at winning or placing in a contest. My editorials spoke     of lessons learned and resources available, but I myself had yet to land a publisher for a book—and I had never taken contests seriously with my own entries.

A decade ago, I molded a protagonist, Carolina Slade, and began a mystery novel, in secret. Storytelling in the middle of the night, with no one looking over my shoulder. I read suspense titles by the truckload to try to absorb all that genius from big-name authors. Periodically I submitted to publishers and agents, only to receive a mound of rejections, or loud silence. But I kept writing, kept editing.

Finally, after a late-night dinner with mystery author Pari Noskin Taichert and online discussion with mystery novelist Kathryn Wall, I realized my stories needed professional judgment before I could venture further. What better way to learn my novel’s potential than competitions? I could test the waters for Carolina Slade, but also learn from personal experience how contests help writers improve.

Nothing to lose
A firm believer in practicing what I preach, I viewed the mission as research for future blog posts and articles. I would pursue this project until I had results, at a minimum gleaning interviews from a few judges about their selection process.

I sifted through years of my newsletters and marked a few competitions for my own use. What did I have to lose except a few entry fees?

In 2007 I dared small, entering a contest for best opening hooks sponsored by a small writing organization. I won. I also entered the opening chapter in the Alabama Writers’ Conclave novel contest. I took third.

Dang. Two shots in the arm. Fiction writing had already become my drug of choice; the contest results empowered me with dreams of my potential. I had written nonfiction my entire life. But now, inspired by the knowledge that others enjoyed my made-up stuff, I dug into the novel’s ending and edits with new fervor.

A couple months later I won honorable mention in The Writing Show’s novel competition, judged by bestselling mystery author C.J. Box. He gave me a two-page critique on the opening chapter of my first Slade book. He loved it and advised me not to change much of it, telling me I had a great voice. I lived on pure adrenaline for a week.

Soon I entered a contest from a new online writing organization, not only to test its worth, but to give Carolina Slade another chance. I won the contest for best opening chapter, and $500.

All the feedback lighted a fire under me to pitch agents. Out went dozens of queries. I received rejections, but also attagirl remarks and requests for manuscripts, telling me I was close. Agents praised my query letter. I could smell the winds of change.
The first draft of my second novel evolved more smoothly than my debut story. I wondered why, fearful that I wasn’t giving the second story its due. So I decided another contest might help judge its caliber. The second Slade novel took honorable mention in the CNW/FFWA Florida State Writing Competition.

Many edits later, during a one-week window in 2009, Amazon teamed with Penguin and accepted 10,000 novel entries for no entry fee in the Amazon Breakthrough Novel Contest. I thought, why not?

I made the quarterfinals—the top 500 entries. I was stunned but kept submitting queries to more agents, informing them of my novel’s success with contests. By now, I’d topped 70 agent queries.

And still more progress …
Then, in the same month, I landed an agent and made the top-100 semifinals in the Amazon contest, which included consideration by Penguin for a book contract. At the same time, my agent snared the interest of several publishers.

As I waited impatiently for publishers to read my full manuscript, the novel remarkably made the finals in the Romance Writers of America’s Daphne du Maurier Competition in the mystery/suspense category. A bonus: St. Martin’s Press reviewed all of the finalists for a publishing contract.

I panicked, emailed my agent, and asked if I’d screwed up in entering so many contests. Her reply carried the hint of a chuckle, saying such an issue was nice to have.

I learned that contest submissions are read in greater depth than slush-pile queries to publishers and agents. That alone should motivate you to submit. And rather than butting up against an editorial assistant, your work is critiqued by serious writers, agents and editors serving as judges.

I found that contests have many potential benefits, including: motivating you to write to deadlines; demonstrating your writing strengths and weaknesses; and opening the door to recognition you might not otherwise receive.

Bell Bridge Books ultimately signed my novel, and Lowcountry Bribe, the first in my Carolina Slade Mystery Series, came out in February.

For an investment of $150 over two years, I’d won $700, introduced my novel to many respected pros, nabbed an agent, and landed a publisher.

Best of all, my Funds for Writers readers told me they were anxious to read the fruit of my efforts.

C. Hope Clark, founder of fundsforwriters.com, writes nonfiction and mysteries. Learn about her debut novel, Lowcountry Bribe, at chopeclark.com; buy it at bookstores and online.