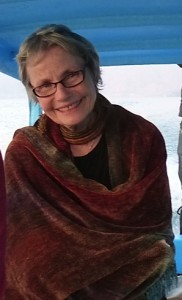 In 1996, poet Patricia Lee Lewis, with her MFA from Vermont College of Fine Arts, teamed up with Charles MacInerney, one of the top yoga instructors in Texas, to start a new venture. Though a combined yoga and writing retreat was unheard of at the time, over the years, the venture has taken the pair around the world, from Costa Rica to Great Britain.

I spoke to Lewis recently for an upcoming Conference Insider column in our magazine. In June, she will be leading a writing and yoga retreat the week before the Jackson Hole Writers Conference about an hour north at Turpin Meadow Ranch. Fresh off a plane from Guatemala, where she was leading one of her annual retreats, Lewis spoke from her home and permanent writing workshop Patchwork Farm in Westhampton, Massachusetts. “I don’t leave here in winter because I don’t love it,” Lewis said of the three feet of snow that awaited her. “Winter is just when people will pay you to go with them to Guatemala and write.”

With a charming Texas lilt in her voice and plenty of laughter sprinkled throughout, Lewis shared information about her retreats and the relationship between the two practices.

Tell me a little about yourself and about your retreats.

I started leading creative writing retreats in 1992 and then international ones in 1997, combining writing and yoga. I go to Texas every year and do a retreat there. And then up here in the Berkshires, I have weekend retreats and run year-long manuscript groups.

When we put together creative writing and yoga in 1996, neither the yoga teacher nor I had ever heard of doing this, so it was really very early. Now there is yoga with this and yoga with that, and it’s all wonderful. But it was very early and we just kind of had to make it up as we’d go along, and what a fun thing to do.

So how did you come up with the idea if neither one of you had really heard of it before?
I was in Austin, Texas, for about six months, and I found this little class at the university right across the street from where I was living. It was taught by Charles MacInerney, and he heads up all kinds of Texas yoga things. I was leading creative writing retreats, and I was always very careful to help people in my group keep each other safe enough to write whatever needed to be written. Psychological, emotional safety has always been paramount for me in helping groups help each other support one another as writers. So in this class, I had the thought one day – you know, he is as concerned for our safety as I am for the writers’ safety.

He offered a three-day retreat, so I went, and at the end of the first long set, I said to him, “Charles, you know, when I was doing some of those postures, it made me feel like they were like a writing prompt. Like I can sit down and write something now.” [I told him] I run retreats too, [but] nothing really came of it. [After] the next class at the university, he said, “Well, you want to try it?” And I said, “Try what?” And he said, “Leading our retreats together.”

Does he always do the yoga portion of your retreats?
No, I have four yoga teachers. They’ve written with me. I like them; they like my method. We always room together and evaluate together, [so] you have to have a good team. I lead the writing and always have a yoga teacher with me who’s also a writer. We keep those things very much together, because people really do need some way of staying in touch with the body when they’re writing. It’s just so integral to how you can write – and I think how we keep ourselves in shape enough to keep sitting for so long as we’re writing.

We begin the day at 7 a.m. with an hour and a half of hatha yoga designed for people all the way from I-haven’t-done-yoga-in-25-years to people who are also teachers of yoga. So it’s very similar to the writing, which can work with people at all levels. Then we have breakfast and get ready for the day. Usually from 9:30 a.m. to 12:30 p.m., I have an orientation and prompts for people to write. We might do a warmup of seven minutes and we might even do an hour-long writing – it varies. We have lunch, and then afternoons generally are free, though often we organize something like horseback riding or rafting. But you can also just keep writing – I always have extra prompts available. Then we have dinner, and after dinner, generally I have some kind of experimental writing – something fun, or we might do movement in writing. Occasionally there will be a completely free evening.

I know you mentioned the relationship between yoga and writing. Do you think there are any other similarities between the two?
Well, the practice certainly. They both benefit from commitment and pleasure, as well as some kind of a discipline – regularity in practice. They both have a way of coming back to you when you have neglected them. So that’s kind of hopeful. It requires practice and work, but mostly what it requires is getting out of your own way and just sitting down and writing – no matter what comes out. I’m thoroughly in favor of people writing from a deeper place, not the thinking part of the mind, but rather memory and image and feeling, and so yoga helps us get in touch with the feeling self.

Memories are really embedded in our tissues, they’re in our bodies – we may think they’re in our brain, but anybody who’s had a good massage has had memories come out. That’ll tell you they’re in your backbone, in your shoulder muscle – they’re there. Yoga helps loosen that up.

Is there anything else we haven’t covered about yoga and writing or about the retreat before the Jackson Hole Writers Conference?
I didn’t mention that they have amazing food at the Turpin Meadow Ranch. I really like to be well fed! It’s a beautiful place to be no matter what you’re doing.