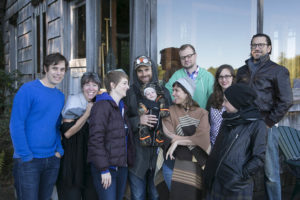 Attendees at the 2016 fall retreat. Photo by Christopher LittleNovelist Courtney Maum used to notice something unsettling whenever she attended a writing conference or film festival with her filmmaker husband: There was no overlap between the two disciplines in the public forum. “I started thinking it would be cool to create a place for writers and filmmakers to come together,” she says, “and then I thought, ‘Why limit this to just two disciplines? I’m sure one could learn from a ceramicist, a dancer, or actor – even a clown.’”

At the same time, she despaired over the financial and time commitments required by most writing retreats. “A lot of people don’t have 10 days to take out of their vacation schedule, or they have kids,” she explains. “I thought there might be a way to get the same level of inspiration and networking out of a shorter and much cheaper program.”

With this in mind, she founded The Cabins – a four-day interdisciplinary retreat in which writers learn from each other and from artists, activists, and community organizers. “Everyone who participates teaches an hour-long master class,” Maum explains. “You can’t just read your work. It’s about cross-learning and cross-pollination.”

Sign up for our weekly newsletter, full of tips, reviews and more.

What you learn depends on the other six to nine participants along for the four-day journey. The retreat might begin with a presentation on documentary songwriting – as it did last summer – at Maum’s house over dinner, and then feature a class examining an early photographic process called cyanotype, followed by a class on travel writing, a workshop on self-care and meditation, a group discussion on the power of vulnerability, and a class in writing translation as an act of resistance.

In between classes, Maum builds in time for participants to network over hiking and lake swimming in the summer, snowshoeing and ice skating and sitting around the fireplace in winter. Classes take place in and around a main house with rooms that are either shared or private. “If you attended camp while growing up, and liked it, you’ll like The Cabins,” Maum says.

Past presenters have included a filmmaker who taught participants how to overcome writer’s block and a comic book author who demonstrated how to storyboard a project. Others have delivered talks about the intersection between creativity and politics.

People of color, those who identify as LGBTQ+, and religious minorities may apply for The Cabins Diversity Scholarship. “In the government we have, we need to go above and beyond ourselves to support people from marginalized communities,” Maum says. One of the Diversity Scholarship winners, a Boston-area artist and culture worker who goes by the single name Pampi, won a scholarship to teach a workshop on how to use dance to lead into difficult conversations about topics such as cultural appropriation.

The Cabins also offers a scholarship specifically for women. Ilana Siegel won one of them; she’s a community facilitator and bodywork teacher with a focus on women with children. And writer Catherine LaSota actually brought her child – a nursing newborn – to the first Cabins retreat and stayed in a separate residence with her husband, who provided childcare.

“I want there to be room for people who are being excluded from other residencies and retreats – people who don’t have a lot of money, or they don’t have a lot of time, or they’re still emerging in their career, or they have a newborn baby,” Maum says. “The baby was present sometimes, and LaSota felt like she was able to have the best of both worlds.”

Come prepared to perform; The Cabins Collaborative Retreat ends with a talent show at Norfolk’s public library. Participants share their work with each other and with the community – work that ranges from short films to opera singing. Last year, the program concluded with performance art by Joanna Hoffman. “She performed a poem about her mother’s struggles with cancer,” Maum explains, “and everyone was crying and cheering – it was such a visceral reaction to a really powerful performance.”

Her biggest piece of advice is to come to The Cabins with excitement – and without specific expectations. “Be prepared to get just a little bit out of your comfort zone. The retreat is a nice combination of ‘woo woo’ and ‘Type A’, so that participants will hopefully feel both really free creatively and supported while they are there.”

Participants receive a schedule before they arrive, so that they know when they’re teaching their master class and when they’ll have free time to write and network with one another between classes.

“People are in their own creative silos,” Maum says. “Your writing is not going to improve if you only socialize and communicate with other writers. We need to get out of these closed silos and get to know how other people live and think and what they’re doing with their free time.”

Contributing editor Melissa Hart is the author of the forthcoming Better with Books: Diverse Fiction to Open Minds and Ignite Empathy and Compassion in Children (Sasquatch, 2019). Web: melissahart.com