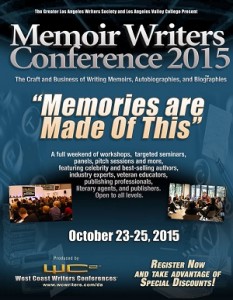 Many writing conferences focus on the big publishing picture: international best-sellers, pitching agents, social media – general topics that will go the furthest and draw the interest of the maximum number of attendees. However, a Los Angeles-based conference machine churns out three events annually focusing on specific writing genres for both literature and film.

Past conferences have concentrated on science fiction, mystery, thriller, fantasy, horror, erotica, true crime, spirituality, YA and more, and this October, the art of the memoir will be at center stage. During three days, attendees of the Memories Are Made of This writing conference will experience full-day programs on writing memoir and autobiography – from crafting one to selling one.

According to Tony N. Todaro, founder and executive director of West Coast Writers Conferences, those interested in writing creative nonfiction can benefit from attending a conference specifically geared toward the genre. “Writing a memoir or autobiography has two unique issues,” he says. “Either the writer is not a seasoned professional and may be unfamiliar with the concept of writing a book proposal first, or the writer is too close to the story and lacks the ability to organize, structure and develop a professional manuscript that can be published and read by an audience of more than just friends and family.”

To help writers traverse that path, Todaro and his team have planned a schedule that taps into the faculty of more than 250, including celebrity memoir writers such as Brandon Cruz (from the TV show The Courtship of Eddie’s Father), who will join Robert Yehling and Claire Gerus for a panel on writing and selling a collaborative memoir.

Authors and writing educators will also lead seminars, panels and workshops about preparing a book proposal, researching a non-fiction book, writing about real events without getting into legal trouble and proofreading. In the session “Telling Healing Stories,” literary agents and writing consultants D.H. Brady, Helga Schier and Gerus will provide instruction on crafting a compelling memoir that reaches beyond your family tree. Meanwhile, memoir authors Sonia Marsh and Madeline Sharples, with proofreading expert Kathy Ide, will give information about developing relationships to sell and market a memoir.

“We will have a panel each day of authors who have written a memoir, discussing what challenges they faced and how they finally got their work published,” says Todaro. “We set up tables outside each classroom for speakers to continue answering questions and meet with attendees. We encourage networking.”

Those writers who are in the process of submitting proposals or putting the finishing touches on a manuscript should consider making an appointment for a professional one-on-one critique with an editor, agent or publisher. “We don’t offer ‘speed dating,’” Todaro points out. “Instead, [we use] a more constructive and helpful program.” 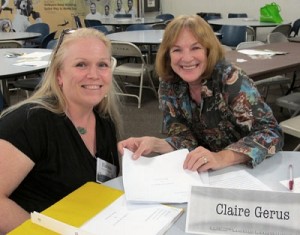 That program comes at an extra fee, but it means that the first pages of a manuscript will be reviewed by an industry insider. During the scheduled 10- to 15-minute meeting, the editor or agent will provide notes to the writer.

“To help attendees,” Todaro explains, “we offer a training session the first two mornings with the agents and publishers of the day. Attendees can meet everyone, hear what they are looking for, how they like to be approached and what they don’t want. It helps attendees be better prepared for the real pitch meeting later that day.”

The Genre-LA conferences have seen many successes, including finding an agent and landing a book deal. But even if no deals are made, writers can still benefit. “[Some] make connections with agents and publishers and pitch them again, based on notes they get at an earlier event,” Todaro says. “Even if they are not successful, they are allowed to re-pitch them.” And lucky for authors, the conference does not charge an additional fee for these pitch sessions.

Maybe it’s the Southern California vibe, or perhaps it’s the electricity of being around people who are interested in the same writing genre, but either way, there is a strong feeling of community at each of the conferences conducted by Genre-LA – which is pronounced “Shangri-La.”

Todaro has a better name for what he and his colleagues are building: “We receive high marks for the feeling of ‘Ohana,’ or family, that we work hard to create and maintain throughout each event and beyond.”

Meredith Quinn is a graduate of New York University and former managing editor of The Writer.