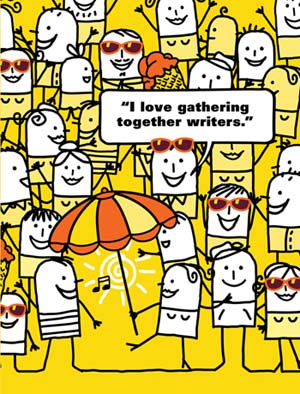 As the sun sets on the first day of the Summer in Words Conference at Oregon’s Cannon Beach, writers and presenters mingle – not over martinis at a hotel bar – but around tidepools and boulders festooned with orange and purple sea stars. In the distance, 235-foot-tall Haystack Rock offers inspiration for those who’ve traded pen and paper for camera or sketchpad. A debut YA author frolics on the sand with her dog. A New York Times best-selling novelist plays with his children and pauses to talk with participants from his afternoon workshop.

“Writers need real face time with each other,” says Summer in Words director Jessica Morrell.  “They need to be inspired by how other writers live their lives. People come back from the beach experience, and their cheeks are pink, and they’ve got a gleam in their eyes. I love gathering together writers.”

A literary conference provides workshops and manuscript critiques, networking opportunities and the excuse to travel to a new locale. Often, these events tied to major writing organizations take place in airport hotels – easiest for out-of-town agents, editors and guest presenters to access. The advantages of a large conference include an enormous array of workshops and the opportunity to pitch manuscripts to agents and editors. However, participants may find that they’re so busy with scheduled activities that they never see the outside of the hotel or talk with their favorite authors face-to-face.

There’s an alternative to this. All around the country, small independently run conferences allow writers to interact intimately with presenters in settings that range from quaint small towns to gorgeous coastlines. While workshop offerings may be more limited, without a literary agent in sight, you may just find yourself pondering a sea anemone with the author of your favorite novel.

Attending such a gathering is a breeze. Running it, often alone or with the help of a few others, can be more difficult. Morrell wears numerous hats as organizer, presenter and hostess at the conferences she runs, complete with catered meals. She recalls a weekend during which the facility’s dishwasher broke. “My husband and I spent 40 hours washing dishes,” she says. “I was running up and down the stairs doing dishes, meeting with clients, trying to be the hostess. We still laugh about it.”

Location, location, location
Let’s face it: Three days of listening to workshops and keynotes and pitching manuscripts in an air-conditioned, fluorescent-lit hotel can be exhausting and leave you longing for a breath of fresh air.  Morrell holds her conferences at resorts surrounded by gardens and beaches. Her other major conference – Claim Your Story – takes place in Ashland, Oregon, near the Oregon Shakespeare Festival and forested Lithia Park. She makes sure to schedule time at all her conferences for outdoor exploration.

“If there’s greenery or ocean around you,” she says, “there’s something about the atmosphere. You click more.”

“For the residential conference,” he says, “the setting is absolutely critical. Convenience is the primary consideration if you’re just coming in for the morning.”

Location figured prominently into Patricia Marshall’s decision to launch a writers’ conference in Eugene, Oregon. The state’s second-largest city boasts fir-forested buttes and the Willamette River along with a downtown packed with hip coffeehouses and brewpubs. Marshall and the board, including an employee from the local tourist information center, started Wordcrafters Writers’ Conference in 2104.  From the start, they reached out to downtown merchants and arts organizations.

The conference also hosts the Introverts’ Ball, with a no-host bar, music and dancing. “The idea behind it,” says Marshall, “is that no one wants to come out and mingle because we’re all writers, and we’re all introverted. We wanted to create a feeling that everyone belongs. You may be introverted, but you can come and be weird with everyone else.”

This year’s ball found best-selling thriller novelist Kevin O’Brien sharing a dance floor with conference participants. One of the biggest assets of a small independently run writers’ conference is the availability of presenters to meet attendees face-to-face, whether on the beach or under a disco ball.

Attract power presenters
Conference organizers rely on their own literary connections to find superb presenters. Decades ago, Hawkins sat in classes at Yale with Julia Glass; she’s a guest presenter at his summer writers’ conference for young adults. Writer Elizabeth Engstrom, also on the board of Wordcrafters, counts as friends fantasy fiction author Terry Brooks and mystery author Elizabeth George; they both spoke at the 2014 event.

If you don’t have a personal relationship with the authors you wish to invite, reach out to them in other ways. Donna Talarico, editor of Hippocampus Magazine and chair of a new conference for creative nonfiction writers called HippoCamp, used several methods to find her speakers. While she went through a bureau to hire Creative Nonfiction editor Lee Gutkind, she emailed writers such as Jane Friedman directly through their websites. She also put out a call for conference proposals. A committee reviewed these with an eye for author platform and speaking experience and remained open to proposals written by first-time presenters she describes as “everyday people who do something cool.”

Morrell hired author Cheryl Strayed before Wild exploded onto best-seller lists and movie screens. She had attended one of Strayed’s readings and approached her to present at Summer in Words. “I look for writers who are full of heart,” she says, “with the attitude, ‘If I can do it, you can, too,’ but who aren’t afraid to get nitty-gritty with their advice.”

Morrell also treats her presenters like royalty, gifting them with nice hotel rooms and fine chocolates to supplement a modest paycheck. She treats faculty and attendees to gourmet breakfast spreads, lunches and dinners full of fresh fruit and vegetables and Pacific Northwest salmon. Flowers fill each conference room. “I want people to feel nourished while they’re there,” she says.  “I want everywhere they look to feel like I was thinking about their experience.”

Think budget
No one’s getting rich as a conference organizer, but most do break even. Hawkins believes that you can’t start spending money on such an event until you have it. That is, wait until participants pay the tuition before cutting presenters a check. His start-up costs, he says, are limited to advertising. For the young writers’ conference, he took out full-page ads in school papers and created targeted Facebook ads.

HippoCamp in Pennsylvania takes place at the Lancaster Conference Center, which requires, in exchange for free use of its rooms, significant food purchase from participants. Talarico figured this into her budget along with payment for keynote speakers, then built in a marketing budget. “Grassroots and social media are great,” she says, “but I wanted to send out postcards and letters and swag to pass out at the conference.” She based her attendance goal on budget projections after researching the cost of similarly sized conferences, taking into account the added cost for flights into a smaller city.

“I want it to be affordable and a good value, and make back the money,” she says. “We’ll break even, or if there is extra money, it will go to next year’s conference.”

Morrell says it’s important to estimate costs and attendance realistically and then create a detailed profit and loss statement “so that you know how accurate you were, and if your pricing works.” As with Marshall and Talarico, she notes that previous event-planning comes in handy. With a 20-year history of bringing writers to the coast for workshops and conferences, she has learned another important policy: no money back for participants disgruntled by honest manuscript critiques or extreme weather.

“One time, I had really bad weather at a little conference at the coast,” she says, “practically a typhoon with 16-foot waves. People driving in that morning got there a little wild eyed.” She welcomed them with these words: “The coffee’s hot.”

That’s perhaps one of the most important components of a great writing conference: good coffee, and lots of it. Another is the spirit of gratitude that organizers bring to such events. “Coming in with the right mindset and heart makes such a difference,” Morrell says. “You have to love the writing community to do this stuff.”

Want to organize a conference? Take these tips.

“We use a project management tool called Basecamp. I put all pre- and post-conference tasks on it. It keeps everyone in check and sends us reminders.”
—Donna Talarico, HippoCamp Conference Chair

“We’ve focused on craft in fiction the first two years. Pick a focus and stick to it. Try not to be everything to everyone.”
—Patricia Marshall, Wordcrafters in Eugene Conference Director

“You need to have passion and drive, whole-heartedly believing in what you are doing and how it will impact the creative community. Surround yourself with other passionate people who can help make that dream a reality.”
—Cornelia Becker Seigneur, Founding Director of Faith & Culture Writers Conference

“Your conference as the coordinator should reflect you as a person and writer. I like nurturing people, so I try to supply extras like good food and truly helpful handouts. I like to laugh, so I keep making jokes all along the way, making fun of myself especially.”
—Jessica Morrell, Summer in Words and Claim Your Story Coordinator

“Like writing itself, running a writers’ conference requires you experiment, you not be locked into a formula, and you be willing to fail because you’re going to have to revise it every year.”
—Gerard “Gerry” LaFemina, Nightsun Writers’ Conference

“Cultivate a strong sense of community around your retreat before, during and after the program dates on the calendar. Keeping in touch with your participants throughout the year is personally rewarding and helps insure repeat participants.”
—Stefanie Lipsey, Writing Yoga Retreat Co-Facilitator

Melissa Hart is the author of the memoir Wild Within: How Rescuing Owls Inspired a Family. She teaches at writing conferences in the Pacific Northwest.

To find a writing conference you’d like to attend, check out our listing of conferences.