Type “character worksheets” into a search engine, and you’ll find hundreds of resources to develop your protagonist and other characters. Some of the worksheets are basic (name, age, hair color), and others are a series of thought-provoking questions: “When was the last time this person laughed? And at what?”

You might diligently fill in answers and start to write your story. Or you might begin to write your story until you feel blocked and then bring out the worksheets to explore character. Regardless of the timing of this work and the hours spent, it’s quite possible you will feel no closer to understanding your characters in any useful way than you did at the outset. Here’s why.

We are not alone in this world

It is a rare story that has a character utterly isolated. We do not exist in a vacuum; we live in a world inhabited by others. Others influence us. Consider how you can be in a room, in the midst of a party, and behave a shade differently – or even more than a mere shade – with each of those people at the party. Have you ever met someone, begun to get to know them, and found yourself saying things that surprise you? Think about the subtle differences that show up in your own personality as you spend time with one person and then with another. Or in a changing situation or different place: consider “vacation you” versus “workplace you.”

Worksheets cannot capture such nuance, and they don’t allow us to see one character in sharp relief to the “other” in their life.

Working with the other

In the film Cast Away, with Tom Hanks as Chuck Noland, alone on an island, the story takes a turn when he makes friends with a washed-up volleyball that he names “Wilson.” Even with no other human character, this secondary character becomes significant, allowing the audience to see who and what the main character of Chuck is all about.

Human beings in isolation are not only lonely but also downright boring.

Likewise, in Island of the Blue Dolphins, by Scott O’Dell, the main character, a young girl named Karana, is alone and befriends a wild dog named Rontu. (Yes, the same dog that killed her brother; such is human need for companionship.) Through the character of Rontu, and Karana’s connection with him, we see her development.

Human beings in isolation are not only lonely but also downright boring. Without others in our lives, we do not develop. So why would we expect our characters to do so? We need to see a character interacting with others.

Another type of worksheet

For an interactive way to explore what your character is all about, take a large sheet of paper and write the main character’s name in the middle of it. Place the other characters’ names around, leaving a lot of white space between them. Rather than writing out notes about each individual, use the space between their names to explore what is developing between them. What is their history together? How is that history working on them? What is it they appreciate or loathe about each other? What are their expectations of each other? How do they view the other? Where are they at right now? And where might they end up?

“Hinterlands” are those frontier places that lie just beyond what we know; in exploring our characters, we need to wade into what we don’t know about them.

Work your way through the interactions between all the characters. When the first sheet is filled with notes, make another, and on this one, move the main character to a different place, and re-align the secondary characters in order to see yet another set of actions, responses, shadows, and histories. At some point, if you feel a need to gain some understanding within the roles of tertiary characters, you might chart their inter-lands, too. No character is too small; the kid who delivers newspapers should have a purpose.

Not only does this inclusive approach to the worksheet yield so much working knowledge of characters, but it also grows plot – exponentially. You might begin to hear the voices of the characters, in conversation with each other, and the resistance and openings between them. You grow a sense of how they move and speak, and even of how they might avoid truth, even their own truth. The characters begin to take on life in a way that is so different from filling in a questionnaire; the charts become breathing documents with which to work. The keys to plot – having time-locks, determining motivation and stakes, character faults, weaknesses, strengths, and goals – will rise to the surface in this work.

Physical rendering of the chart/worksheet 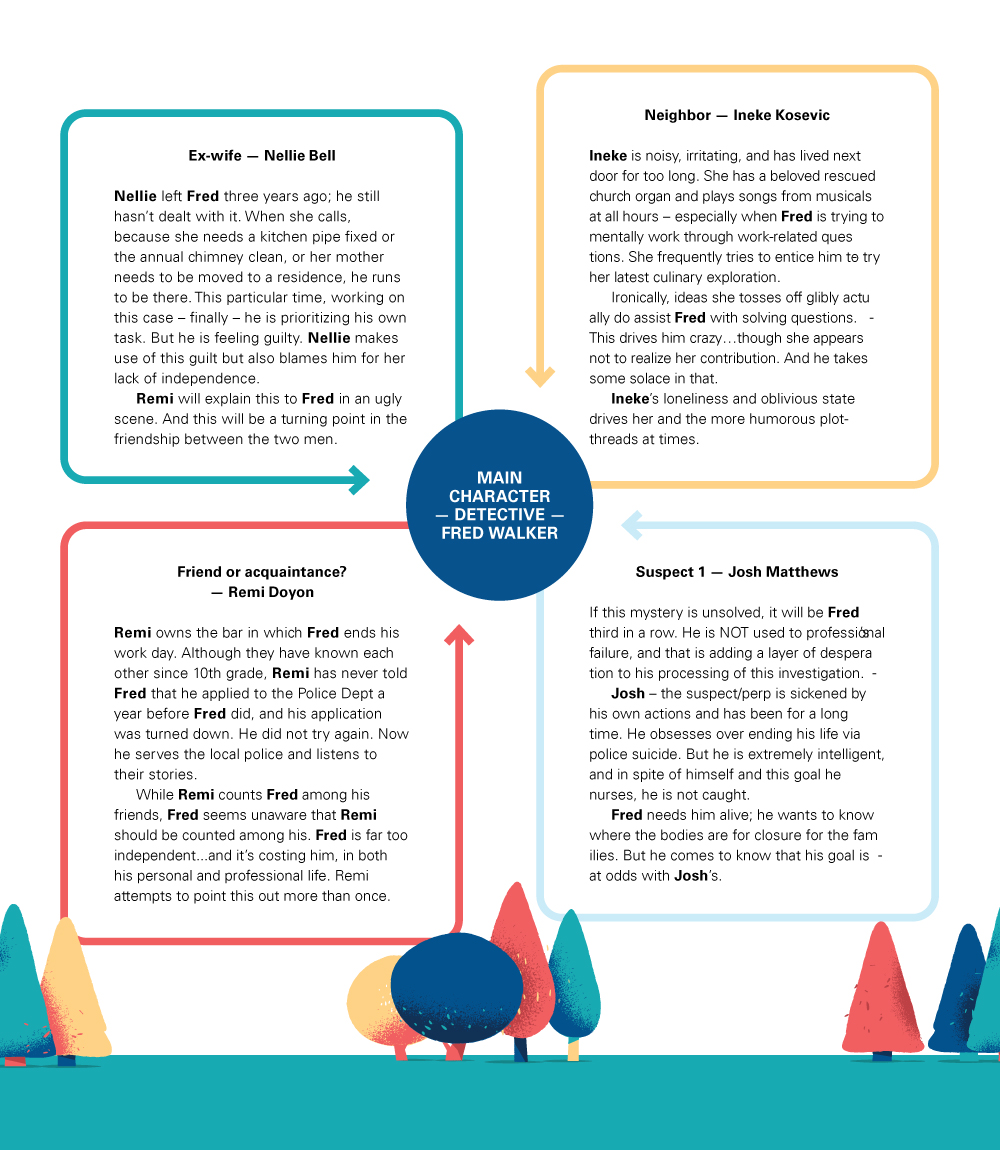 Take a look at the diagram. It’s an example of what is shared between four characters and the protagonist. It’s a starting place; there is one note about an inter-personal connection between two of the secondary characters. As you work through your characters, continue to add in this vein.

You know how you work optimally, whether on screen or with paper and pen or pencil at hand. (Or, if you are unsure which works best for you, try both). There is an organic sense to working closely with paper and with a writing tool in your hand. If you do choose to work in this way, set aside that old bug-bear, the eraser. You might cross off some of the thoughts you write but do not erase; leave yourself the opportunity to re-visit the idea.

Mostly, remember to hold tightly to a sense of Play; such drawings and diagrams are maps of places you have not been to yet. And as with any good map, you should find some treasure there.

—Alison Acheson’s 11th book, a memoir of caregiving, Dance Me to the End: Ten Months and Ten Days with ALS, was released October 2019. She has published for all age groups, from picture books to YA and MG fiction, as well as short fiction.