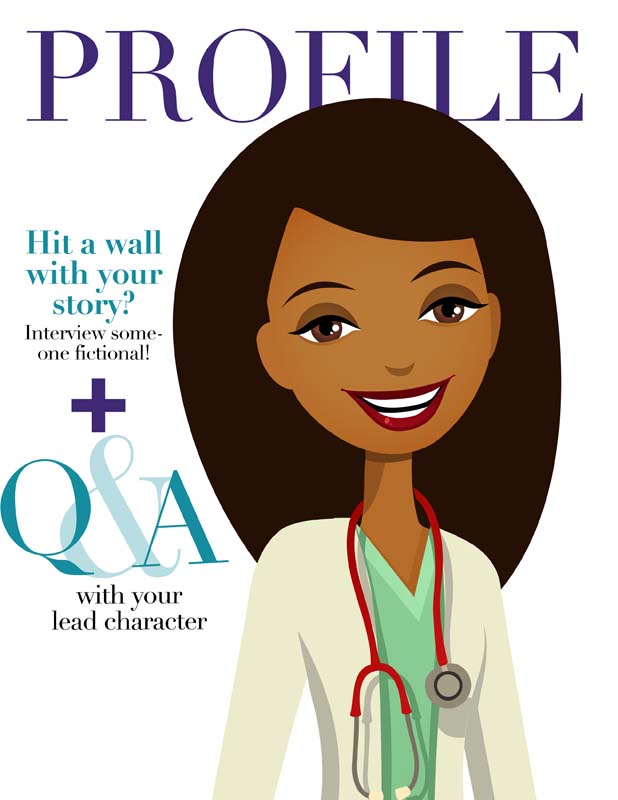 While working on a YA sci-fi story, I ran into a problem with one of my characters. I had a vague idea of who this person was, but I didn’t know much about him, his history or his motivations. Since I work as a journalist and editor during the day, I decided to write a feature article about this character during his younger years. Here’s the opening.

It’s a beautiful spring morning, the air crisp and clear, as I drive out to the Halloran equestrian reserve for my interview with Peter Halloran. Elysium Mons rises in the distance, the cone of the extinct volcano creating a picturesque backdrop to the open fields, barns and horse paddocks of the reserve. It’s almost enough to make one believe that he or she is an ancient cowboy, riding out into the mythical “Wild West” that Earth history describes.

As I pull into the parking area outside of the main barn, Peter Halloran greets me. This is not what I had expected, and I tell him as much.

“You thought one of my staff would be here to greet you,” he says with a laugh that reveals more about his age – just 20 – than do his clothes or bearing. “Perhaps at my mother’s main estate,” he continues, “but not out here. Here everyone pitches in.”

Indeed, this is true throughout the day as Halloran gives me a personal tour of the reserve and offers at one point to carry the satchel that holds my notebook, recorder and camera.

“I’m not quite the hooligan that the tabloids make me out to be,” he says at one point while discussing his public image.

Not quite? I ask in clarification.

Writing this 1,200-word article served a number of important purposes: It let me get inside my character’s head, establish his voice and examine some of the events that shaped him as a young man (which will, in turn, reverberate in my story). The exercise helped me develop Peter Halloran as a lifelike character.

Journalists often approach stories in terms of “characters” for the narratives. Writing any kind of journalistic piece – whether it’s a news item about a fire or a feature on environmentalists – isn’t much different from writing fiction, albeit that journalists have an ethical responsibility to get the facts straight, while fiction writers can usually bend the truth to their needs. Nonetheless, you’re still telling a story that needs to grip the reader from beginning to end.

Fiction writers typically ask readers for a much longer time commitment than do journalists. Most people can read a newspaper or magazine article in one sitting, while reading a novel can take hours, days or even longer. It is critical, then, to ensure that your stories and characters are worthy of your readers’ precious time.

Good character building, undoubtedly, is essential to creating memorable characters who leap off the page. Writing an article about your character(s) can help you achieve this goal.

Fear not: You don’t need to be a professional journalist or to have attended J-school to undertake this exercise. You simply need to be a writer who is inquisitive about the characters you’re molding.

If you do have a journalism background, try your hand at writing a feature article about your character. While “reporting” on Peter Halloran, I discovered that his mother was human and that his father was from Delta Proxima; that he was expelled from secondary school three weeks before graduation; and that he’s a fixture of celebrity tabloids. Although none of these events take place in my story, they are the life experiences of my character that will influence his actions in the book.

But your article doesn’t need to be as complicated as a well-reported piece that seems ripped from the pages of Time. If you don’t have a journalism background, or if you want a simpler approach, try to write a back-and-forth Q&A with your character. Or write a news story about an event in which the character was involved. Or try writing his or her obituary. What will people say about this person after he or she is gone? What did this person accomplish in life?

In addition to character development, writing an article about your character(s) may have a secondary benefit. As Star Wars, Lord of the Rings and countless other series have proved, fans love “expanded universe” material that provides more information about the characters and stories they love. Consider using your character “articles” as promotional features or appendix material. For instance, you can release the articles on your website, blog or social media platform to help build anticipation for the release of a book or story prior to its publication.

Writing often combines many professions: Uncovering a story can propel an author to become an archeologist, private investigator, doctor or police officer Consider adding journalist to your toolbox to find out more about characters and the events that shape their actions in your story.

Patrick Scalisi is a journalist and magazine editor. His debut book The Horse Thieves and Other Tales of the New West, will be released later this year through Hazardous Press.