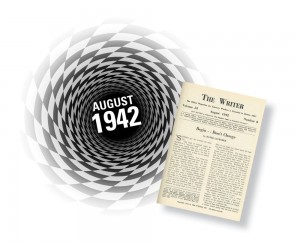 The cold tip of Sam’s snub-nosed revolver digs into Madeleine’s back as he muscles her onto the ledge. She watches her cherry-red pump, dangling tenuously from one foot, finally slip and fall to the pavement below. “One more sound from you,” Sam says, “and you’ll end up like that pretty high heel of yours.”

It’s tempting for a short story writer to open the story right in the heart of the action. Crash, bang, guns blazing, lovers screaming. It’s an easy way to hook readers, right? Place them right in the action, and they’ll be forced to keep turning the pages to see what happens next.

So page one has fire. Page one has promise. But what happens when you get to page two?

This is the short story writer’s dilemma, says two-time Pulitzer Prize nominee David Lavender in the August 1942 issue of The Writer. So your main character is in peril. So what? asks the reader.

“The finest fight, the dearest love in all the world means little to the reader” until he or she knows the characters and the motives behind their antics.

Although the height of conflict may be the most exciting part for the writer, your readers haven’t yet been given a reason to care if your character lives or dies. You could halt the action and take your readers down memory lane via a flashback, but then writers are often forced to use past perfect tense – and “nothing so stultifies the active flow of narrative as does the frequent repetition of that three letter word ‘had.’”

“You need not worry about being dull if you can present within the first few hundred words a definite character in the grip of a definite emotion,” Lavender says.

But introducing a character and his motives to an audience must be done deftly and without explanation. For example, if setting up a boy-loves-girl story, Lavender says, “I must show the boy immediately engaged in wanting the girl. I must do it with unobtrusive little touches. I must bring it out through the way he acts and what he says, being at all times careful not to let the reader guess that he is having something explained to him.”

In other words? Show, don’t tell: Fiction fans don’t want to hear about desire. They want to see it; they want to feel it.

So start your story again. Find out what your characters want most of all, and begin your story there. Cut to the heart of their desires and work outward into your plot. And resist the urge to tell your readers everything: Have faith in their ability to connect the dots.

“Never underestimate the reader’s imagination. It is more powerful than all your fine writing,” Lavender says. “True skill consists in inspiring, rather than in substituting yourself for it.”