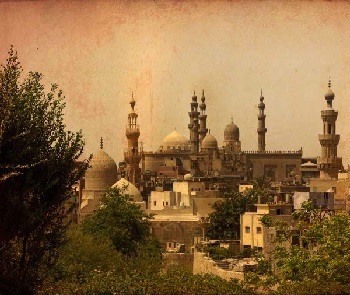 Traveling on a boat with strangers speaking a foreign tongue, a young girl wonders: Is there a way to escape? She leans forward, contemplates jumping into the river and swimming to the other side. Then she notices the back of a crocodile, dark and sleek, emerging from the water. It could swallow her whole.

These are among the images I had in mind when I was beginning my novel Goddess of Fire, set in a period and place I’ve long been fascinated with: India in the late 1600s. It was a turning point in Indian history, when British merchants took advantage of decaying Mughal rule to establish the East India Company. Among these merchants was Job Charnock, a true historical figure who plays a leading role in my story.

Why historical? Readers gravitate toward the genre because they enjoy being transported to another era to glimpse the people, places and happenings of the past. This in turn helps them better appreciate the present and prepare for the future. “[It’s] reassuring to know people faced extraordinary challenges in the past, and enough people surmounted them that the human race has continued to survive and thrive,” says Margaret Donsbach Tomlinson, whose website HistoricalNovels.info organizes more than 5,000 historical novels according to time and place.

You don’t have to be an expert in your chosen period and setting; the only requirement is the willingness to do research. It took Kim Barnes four years to gather the material for her novel In the Kingdom of Men. “It wasn’t just the history of the Arabian American Oil Company in the 1960s; it was the politics,” she says. “It’s astounding how the oil industry is tied to just about every other aspect of international politics and power.”

You have to sift through the material and interpret it. The findings may surprise you. During my research, I discovered many similarities between 1680s India and our present-day world, notably globalization, culture clashes, fighting wars for resources and oppression. This deepened my understanding of the past and helped me make the story more accessible to the reader.

Immerse yourself in the period. You have to fully visualize the characters – their thoughts and feelings – as they confront the challenges of their situations in a bygone era. It is also necessary to make judicious use of factual details and, as necessary, apply imagination to fill the gaps where history is undocumented. Why are details important? Because they make the characters and events seem real. When describing a grand feast to entertain a group of newly arrived British women, I detailed the table setting, dishes served, costumes and jewelry of the guests and how they conducted themselves as though the event had actually taken place.

“The best I can really do,” says Shona Patel, author of Flame Tree Road, “is to whet my reader’s curiosity to learn more about a foreign culture and its history through my stories.”

Many of the attitudes and manners of the past might not be acceptable now, but they can be mitigated. In Goddess of Fire, I show how poorly the domestics were treated by their masters. They were served one meal a day, and their presence was not acknowledged. But to avoid dehumanizing the character of an employer, I occasionally show him acting with kindness. 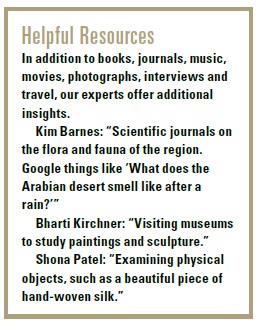 The crucial dialogue. My goal is always to have dialogue sound realistic and natural. Keep in mind the conventions of the era and the rules that must be followed during exchanges between people of different social status.

Is a person of high station being addressed? “A thousand pardons, Your Lord,” he should say, catching his breath. “I am sorry to interrupt, but I have a critical matter to report.”

Are servants speaking among themselves? “You see, Maria, you’re a servant, a mere shadow. You have no past, no family ties and no future. You are what you do for your master.”

A broader perspective. You may build your story around a historical figure, or you could make vivid the life of a fictitious character inserted into a historically significant situation.  In either case, to create a  fuller appreciation for the period, consider including observations on political and economic struggles and tensions of society, gender and class. “Elements of religion, ritual, politics and cultural practices aren’t simply ‘detail,’” says Barnes. “They are often sacred elements of other people’s lives and must be integrated with responsibility, respect and care.”

Of utmost importance is the effect of these elements on the protagonist. “The underlying theme of my novel is usually a key social issue of the time that impacts my main character on a personal level,” says Patel. “How he or she deals with this issue, and is changed as a result, is what creates the story arc.”

The story, above all. How careful must you be in getting facts, situations or context right? Tomlinson says, “Most readers forgive a tiny slip now and then that doesn’t undermine the story’s overall credibility.”

In the end, what’s most important is the story your characters have to tell. Make it gripping, and the readers will want more.

Bharti Kirchner is the author of six novels and four nonfiction works.

Add to Favorites Advertisement “There is nothing insignificant in the world. It all depends on the point of view.” – Johann Wolfgang von Goethe What … END_OF_DOCUMENT_TOKEN_TO_BE_REPLACED