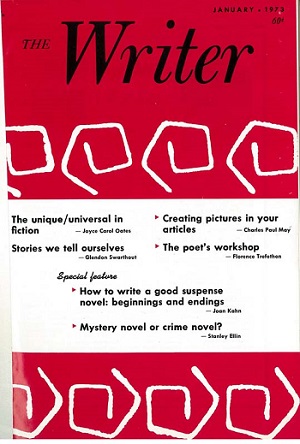 While crafting her vast collection of novels and short stories, Oates gathers inspiration from real events: either her personal experiences or those she culls from the headlines. These ideas seep and evolve through her subconscious imagination, ultimately taking on a new form that reflects the present moment. Regardless of how her creativity transforms the stories, they are always based in reality.

“My own fantasies, however intriguing, simply don’t seem substantial enough for me to formalize into art,” she says.

In her 1973 essay for The Writer magazine, Oates encourages writers to contemplate their life experiences and “see how they illuminate the experiences of others; how they transcend the finite; how they may be of value to other people.” Writers should explore personal emotions and discover the “unique and universal” intense moments from their pasts that are also meaningful and appealing to a wide audience. Oates believes that once a writer connects personal experiences with a universal purpose, the writing will flow naturally.

Most of us are “deeper, more talented and more intelligent” than we realize, says Oates. Writers must face the challenges, the confusing moments in their lives, and transform them into fiction.

Oates reveres the power of art. She believes that art should “enhance” the world, promoting unity, harmony and growth. She encourages writers to tackle topics that others consider unpleasant and even painful, topics she has faced head-on in her own work. Art helps readers overcome pain and perhaps learn from a character’s mistakes. The processes of reading and writing are cathartic.

In her own writing process, Oates begins with an idea that she lets “sink into unconsciousness.” After the idea germinates, she thinks about the novel as a whole, imagining scenes, dialogue and characters. She allows this intuitive process to unfold before starting her first draft.

“It is simply a matter of waiting until the entire book is thought out,” she says.

By the time she begins writing, Oates knows the exact ending of the novel, along with crucial scenes and character descriptions. The actual writing of the book comes quickly, though she alternates between working on a novel and crafting shorter pieces such as stories and articles, allowing her to preserve her objectivity. Once the first draft of a novel is complete, she sets the work aside for a time before returning to heavily edit and cut.

“Though the original, spontaneous part of writing can be very exciting, the real reward for me at least is this third and most conscious, most ‘intellectual’ organization of material,” she says.

By the third stage, Oates has laid the groundwork for a story that captures her personal experience, rather than manufactured emotions. During the entire writing process, “I try to keep in mind the delicate relationship between what is unique, perhaps even eccentric, and what is universal,” she says. “Only in this relationship is there a true subject, worthy of long hours of work.”