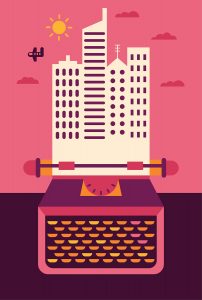 Fiction writers often think of setting as a backdrop to a story, something sketched in just to make it clear the characters aren’t floating aimlessly in outer space. But it can be much more than that: The particular time and place of the story can help the story to evolve and offer insight to the writer about the plot and characters.

It isn’t enough to simply decide on the setting and airlift the characters from the writer’s imagination to Arizona, Paris, or a ship at sea. The choice of setting – both time and place – will inform everything that happens in the story. And by fully describing the setting, the story builds a foundation that proves integral to the plot; this foundation helps to form the characters.

One example of using setting to create story is the brilliant short novel by Stewart O’Nan, Last Night at the Lobster, set on closing night of a Red Lobster restaurant crouched at the edge of a shopping mall parking lot. Corporate headquarters have ordered the place to close. It’s near Christmas.

And there’s a blizzard. This setting note gives the story its extra dose of tension and drama. The blizzard allows O’Nan to ratchet up the feeling of isolation and loneliness that are central to the story; the restaurant is an island in the blizzard; there is no crush of holiday diners. Anyone who has lived in a wintry climate knows that what happens during a blizzard is different from what happens any other time.

I recently had a very talented graduate student, Kelly Grogan, who was working on a short story set roughly in the present day, somewhere in the United States. In the story, a young man comes home after serving in the Army. The story is told from the point of view of his younger brother, who is unsure what to make of the changes in the older brother he’s idolized and missed during his absence. The story was almost working, but there was some deeper underpinning that was missing.

I couldn’t see where the story was taking place. I knew it was in a house, and there was a driveway where the older son’s truck had been parked while he was away. I knew there was a lake nearby because there’s a scene where the brothers go swimming. But is the house a tidy ranch with a neatly mown lawn, or a ramshackle farmhouse comfortably in need of repair? And that driveway: Is it a long dirt drive running from a country road up to the house, shaded by elms or maples? Is it identical to the others on the block? Or is there a grand, sweeping turnaround at the top, by an ancient willow tree?

As I started asking about the setting, I saw other places where the writer could not only help the reader see the story but also where she could gain more information for herself about her story and its characters. The older brother sleeps late on his first morning home, then appears in the kitchen after the parents and the younger brother have finished breakfast. I wondered what was on the breakfast table – a box of Cap’n Crunch cereal? Granola and fresh fruit? Maybe the father had made French toast for everyone.

And why does this matter? Because the reader will imbibe information about the family based on what they’re eating. Some of this will be assumed information: Granola and fresh fruit may be taken to indicate a family with liberal, anti-war leanings. But this thought led me to the next thought, which was that perhaps what was missing in this story was the second storyline, the one that expands a story from the inside out and gives it a second dimension. The second story, or the understory, could be that this family had been virulently anti-war, but the older son had, for his own reasons, decided to enlist. That made me more interested in the primary story of the relationship between the two boys.

If you want to use setting to help you steer your way into deeper story and character, you have to start with detailed description.

All this leads to “show, don’t tell.” How do you “show” that a family is anti-war? Maybe the kid’s pickup truck is sitting next to a Volvo with a “EndLess War” bumper sticker. The topic of the war doesn’t have to be directly raised in this family, but the reader can see the tension from the outside, through the setting details.

If you want to use setting to help you steer your way into deeper story and character, you have to start with detailed description. Consider all the aspects of setting, including both time and place, from the macro level (what is the decade? what country are we in?) to the micro level (what time of day is it? what kind of house? what room in that house?) Choose a day of the week; think about whether there’s a holiday near. Choose the weather. And then describe it in detail.

You’ll likely find that as you describe the setting, you learn about your characters. Put a character in a rainstorm without an umbrella. Shift the story from a Monday to a Sunday. Give a character an ancient VW instead of a late-model Prius – the VW could very well break down, and that will create action. (The Prius also could break down, creating a different kind of action.)

The very best stories are those that touch our common humanity, regardless of where they’re set. Chimamanda Ngozi Adichie’s Half A Yellow Sun is set in late-1960s Nigeria, and much of the story could only happen in Nigeria; it’s that setting-specific. The feelings of the characters, their struggles, and triumphs, are universal, and yet that universality can only be achieved by providing very specific details, many of which are about setting.

Our lives are lived in setting; we remember important events by the way the light played on the water or the glitter of the falling snow. It’s the setting that gives our lives – and our stories – their shape, and that allows the reader to enter fully into the fictional worlds we create.

—Sarah Van Arsdale is the author of five books, including the novels Toward Amnesia (Riverhead, 1995) and Blue (winner of the 2002 Peter Taylor Prize for the Novel). Her most recent book is a narrative poem with her illustrations, titled The Catamount. She teaches in the Antioch/LA low-residency MFA program, at New York University, and with Art Workshop International. Originally Published January 14, 2019